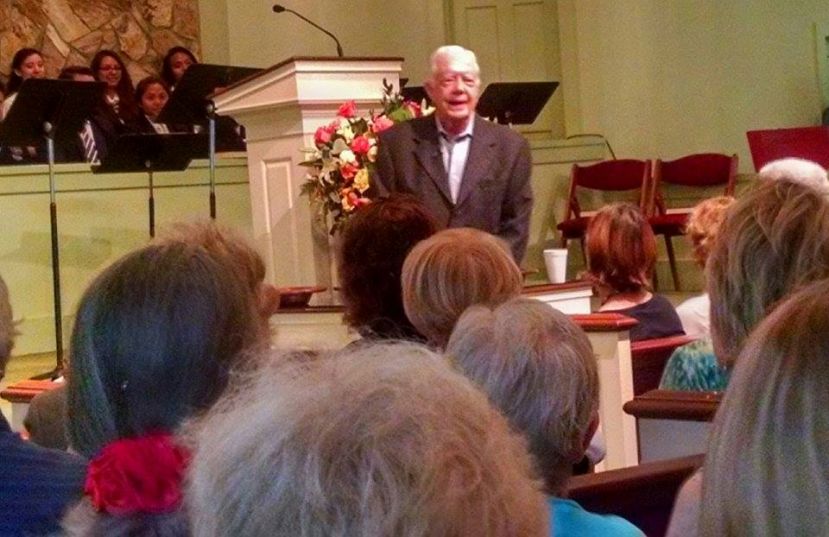 Former President Jimmy Carter, who recently revealed he has cancer, arrived to teach his regular Sunday School lesson at Maranatha Baptist Church in Plains Sunday to the welcome of hundreds of admirers. Well over 500 supporters from across the U.S. and other countries arrived before dawn at the tiny country church Carter calls home and has a seating capacity of about 300.

This was no ordinary Sunday at Maranatha Baptist, which boasts a regular membership of around 30 faithful congregants. While it was not the largest gathering the church had ever hosted, according to Maranatha official Jan Williams, who spearheaded the herding of the crowd, it was certainly the most meaningful.

Williams offered a prayer prior to Carter’s arrival stating, “We are truly blessed that this man who once served our nation ... wants to also be our Sunday School teacher…so many prayers have gone up this week, we know you’re listening.”

She also instructed gatherers that Carter had requested they not offer any applause when he entered the building and not to stand. Though he would be posing for pictures with families and groups this day, Williams specifically asked that no one try to shake the President’s hand in an effort to curtail the possibility of spreading germs.

“Now when you walk up here for your picture, you might feel this nice warm hand on your back and the first thing you’re going to want to do is reach over and give President Carter a big hug, but just don’t do it,” Williams said, drawing laughter from the packed church house.

Ninety-year-old Carter, who received radiation treatments just three days beforehand, entered the sanctuary with no fanfare and carried himself with a genuine meekness and humility that cannot be easily feigned. Looking over the capacity crowd, Carter jokingly asked, “Any visitors this morning?”

The former President spent just a few moments discussing his recent cancer diagnosis and plans for the immediate future and wasted no time getting straight to the day’s Bible lesson, which was focused on Christ-centered love.

He taught from the fifth chapter of the Gospel of Matthew.

“God’s kingdom can be defined by the word love,” Carter said. “You have to love God and love the person that’s in front of you at any particular time.”

Carter added that just being able to admit that we are not always right in a given situation can oftentimes be a good start in conflict resolution and doing our small part to make the world around us a better place.

This was the 689th time the former President has taught Sunday School at the church, according to his grandson and former Georgia gubernatorial candidate, Jason Carter.