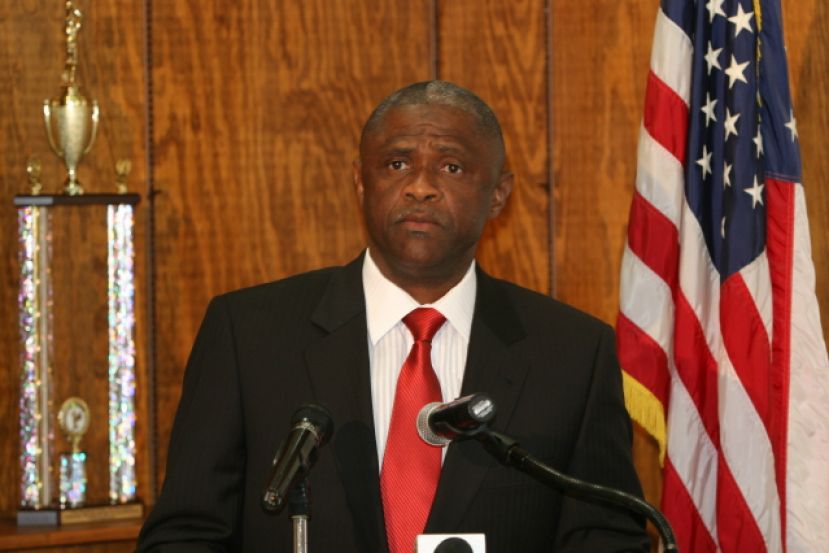 Robert Preston, Jr./DouglasNow.com Douglas Mayor Tony Paulk, seen here at a press conference in the lobby of the Douglas Police Department on Tuesday, March 29, 2016, spoke to citizens and media in the wake of last night's fatal shooting.

“It saddens me for a couple of reasons to have to stand before you today to address this tragic incident that occurred in our city on Monday, March 28, 2016, where a 14-year-old female juvenile [allegedly] shot 18-year-old Traveon Marquess Paulk, who died as a result of that shooting,” stated Douglas Mayor Tony Paulk Tuesday evening at a press conference in the lobby of the Douglas Police Department.

Mayor Paulk and police chief Gary Casteloes addressed media and citizens at the conference. Chief Casteloes updated attendees on the investigation into the shooting death of Traveon Paulk before the mayor spoke. Chief Casteloes provided little in the way of new information; however, he did say the investigation was ongoing and more serious charges could follow. The alleged shooter is being held at the regional youth detention center in Waycross, and she has been charged with involuntary manslaughter.

Following the chief’s remarks, Mayor Paulk spoke. During his comments, Paulk implored parents to know what their children are doing at all times; to teach their children gun safety (even if there are no firearms in the house); and to instill tolerance in their children. “By teaching tolerance, we are teaching our kids to have a clear sense of what is right and what is wrong,” he said.

Mayor Paulk also unveiled a new youth empowerment program he is implementing called the Mayor’s Youth Council. The purpose of the council, he said, is to promote leadership, volunteerism, and community service for youth in the community. “The youth council will work as an initiative to give youth an active role in addressing youth issues. I am also going to request that our Douglas Police Department create a positive awareness program for juveniles, one that will bring to their attention the crime rate and consequences they will face. But at the same time, [it will be] a program that will deter our youth from going down the wrong path,” he said.

In conclusion, Mayor Paulk stated the following: “The misfortunate incident that occurred last night was a senseless tragedy and as a community, we need to build positive programs that will engage our youth and, in the end, hopefully prevent our youth from making poor judgment calls or avoid actions that will cause suffering of others. Parents, don’t take it for granted that your kids should know better. Teach them better. Let’s be vigilant as parents, as a community, and as leaders.”