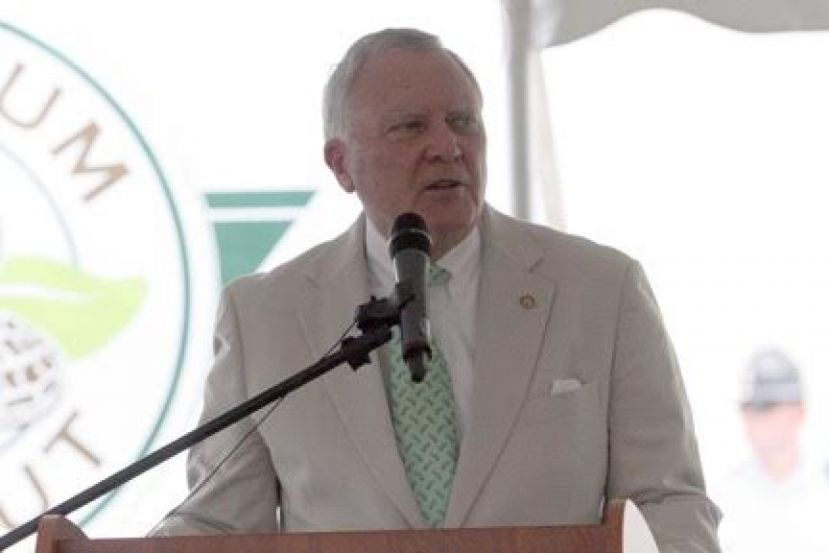 The largest peanut shelling plant in the United States is officially open for business. Premium Peanut, located on Barrington Road west of Douglas, has actually been open for 92 days. Friday, however, the company celebrated its grand opening with a ribbon cutting, which was attended by several high-ranking officials, including Gov. Nathan Deal and his wife, Sandra. Several hundred people gathered on the grounds of Premium Peanut for a luncheon and the ribbon cutting.

Premium Peanut, which was 15 months ago was barely an idea on the minds of farmers and agri-businessmen throughout the area, began shelling peanuts in early January and has, according to Karl Zimmer, CEO, already turned a profit. “We’re running six days a week, 24 hours per day. We’re sold out until July and after our second month of operation, we’re already making money,” he said.

U.S. Rep. Rick Allen stated that the plant will provide a much needed shot in the arm to what has been a lagging agriculture economy nationally. “I’m thankful that this facility is creating jobs and giving people the opportunity to support their families, communities, churches, their state, and their nation,” he said.

During his remarks, Gov. Deal covered a variety of topics, including the need for cooperation and communication, strides in transportation throughout the state, and impressive numbers regarding job growth over the last several years in Georgia. “I simply say congratulations. We’ve tried to get the message across that cooperation is the key. With what we’ve seen with Premium Peanut, others industries will see the importance of that message,” said Gov. Deal, referencing the number of competitors who came together to see this project completed.

Deal also said that over 500,000 jobs have been created in Georgia since he became governor and state revenues continue to climb. “Georgia is on the move. Revenues are up significantly month after month. It’s great to see plants like this one making products for the entire world,” he said.