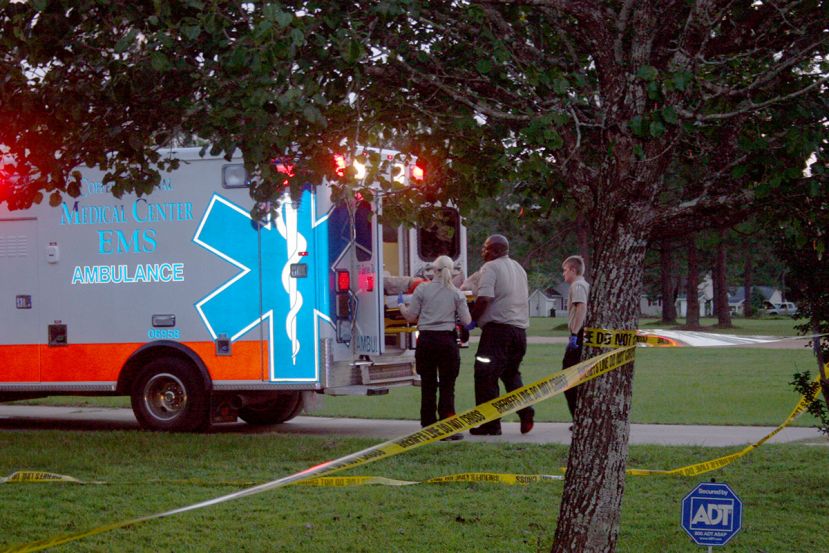 Robert Preston, Jr./DouglasNow.com EMTs place the victim of the Willow Way shooting in the back of an ambulance Saturday afternoon. According to the 911 call, the mother of the victim's girlfriend shot him in the head because he was assaulting his girlfriend with a knife. He was breathing at the time but his injuries are considered life-threatening.

It was supposed to be a lazy, late summer Saturday. The kids are settling into school. The Trojans won a game they probably shouldn’t have the night before. Some people have already started the countdown to the holiday season. No, nothing serious was supposed to happen today.

And yet it did. One day, two shootings, three victims -- one with life threatening injuries. One shooting took place in the shadows of a church, the other happened blocks away from an elementary school. Two traditional havens of safety and security turned into places of bloodshed.

First, let’s talk about the most serious of the two incidents. Around 8 p.m., 911 received a call that there had been a shooting at 65 Willow Way, just off 441 South near Carver Baptist Church. Authorities have not released any names. However, according to the 911 call, the caller reported that she had shot a male in the house. The call stated that the victim allegedly attacked the caller’s daughter with a knife, assaulting her and attempting to cut her. The caller stated that she shot the male in the head. Initial reports were that the male died as a result of his injuries. However, at the time EMS transported him from the scene, he was breathing though his injuries are life-threatening.

Officers from the Coffee County Sheriff’s Office were interviewing the two female subjects at the scene. At the time of this writing, authorities have not issued any statements regarding any potential charges.

The other shooting happened near Eastside Park, a short distance from Eastside Elementary School, just before 6 a.m. Saturday. According to the Douglas Police Department, a couple was walking on Jackson Street before daylight. They were headed to the female’s mother’s home. While they were walking, a black car pulled alongside them. The vehicle contained two black males dressed in black clothing.

According to police, the passenger in the car ordered the couple into the car at gunpoint. They drove the couple around the city for about half an hour before pulling up at an abandoned house near Eastside Park. The two men told the couple to get out of the car and walk to the back of the house. As they walked around the house, the passenger in the vehicle began shooting at the couple, hitting both multiple times. However, neither were seriously injured. They ran to their home, which wasn’t far away, and called the female’s mother. She picked them up and took them back to her house, where she called EMS. EMTs arrived and took the couple to CRMC, where they were treated and released quickly.

Other than these two shootings, nothing major happened in Douglas and Coffee County today . . .