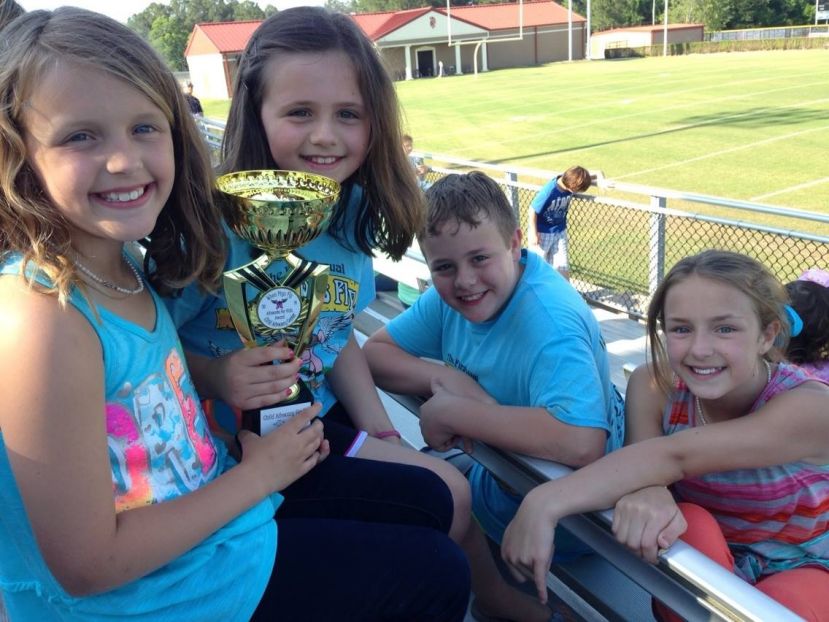 Submitted Photo From left: London O'Steen, Maddie Knight, Gavin Knight, and Abbie O'Steen of the Flyin' Cowboy team show off their trophy at the When Pigs Fly event in May.

"This time last year, the Child Advocacy Center of Coffee County (CAC) barely had money to meet the payroll of its two employees," said CAC President and long-time board member Tony Henderson. That's when he and CAC Executive Director Carol Williford went to work to rejuvenate interest in the CAC and to recruit individuals with a particular interest in helping children.

What a difference a year, a few new members, and a lot of hard work can make!

The board members of the CAC hosted a wonderful community-wide, family fun day at Jardine Stadium on Saturday, May 17. The event centered around a capital campaign that was essential to raise the funds needed to renovate the newly acquired building on Ward Street for the CAC. Last fall, the board of directors knew they had to determine a unique way to raise at least $50,000 for the project. Newly recruited board members Angie O'Steen and Judi Worrell were named co-chairs of the fundraising committee. O'Steen traveled to north Georgia to meet with another CAC director to look into a successful event that worked for their community. After much discussion with the local board of directors that particular idea was discarded, but Worrell offered an idea that would prove to be monumental. She suggested that "When Pigs Fly" (complete with a pig drop) would be a great theme for the day-long event and ideas sparked from there.

O'Steen suggested adopting pigs (not real pigs) at local adoption sites which was essentially a ticket for a chance to win one of the awesome prizes at the pig drop, and having the day to revolve around placing the spotlight on children. "Our agency is here for children so it only seemed natural for our event to place the focus on the talent of local kids,” remarked O'Steen.

Without hesitation, Judi Worrell's neighbor, Robert Widner of Skywide Aviation, jumped on board to serve as the pilot for the pig drop as the highlight of the event. "Securing the pilot and the plane, Jardine Stadium and Bonwell Royal Field was a match made in pig heaven. We attribute 100 percent of the event’s success to the complete cooperation and full support of the Board of Education, Coffee High Athletics, the City of Douglas, and all the administration of these various entities. It wouldn't have been possible without Jardine Stadium's outdoor stands and football field for the 5K and pig drop," said O'Steen and Worrell.

The day began at 8 a.m. with a 5K race at Coffee High School and was organized by Coffee Regional’s Wellness Center. There were 160 children and adults who participated in the 5K. There was also a five-team BBQ cook off among the Coffee County Dive Team, Sheriff's Department, and City of Douglas Police Department, each vying for two trophies: The Pluckin' and Piggin' People's Choice Award and The Hogfather of the Chicklet and Piglet Judge's Choice Award.  (Rubbin’ Butts, with Ray Ricketson and Kenny Rowell as team captains, won both). Perhaps the most prized trophy of the night was the CAC's Child Advocate of the Year award which went to the individual or business that adopted out the most pigs. David and Kim Knight of Flyin' Cowboy won the award by adopting out over 300 pigs and selling over 100 t-shirts. "Flyin' Cowboy caught the vision and understood what it meant to become an advocate for kids. Each numbered, foam pig represented one child on our community. Every pig that was adopted by an individual or business brought our dream of owning and renovating the new building into sharper focus, and now a reality," stated CAC Executive Director Carol Williford.

"There are so many individuals and businesses to thank for becoming an advocate for kids, and for helping to make the event raise over $61,000 for the CAC. Our community proves over and over again that when we all pool our resources together, we can make a huge difference for so many worthy causes in our community," stated the fundraising duo.

The CAC board of directors is profoundly grateful for the love and support they received with the event, and they have already set a date for next year's When Pigs Fly event. It is set for May 16, 2015, and the board promises to make it bigger and better with each passing year. Go ahead and make your plans to attend and join the fight for protecting our children. Adopt a (foam) pig and become an advocate for kids!