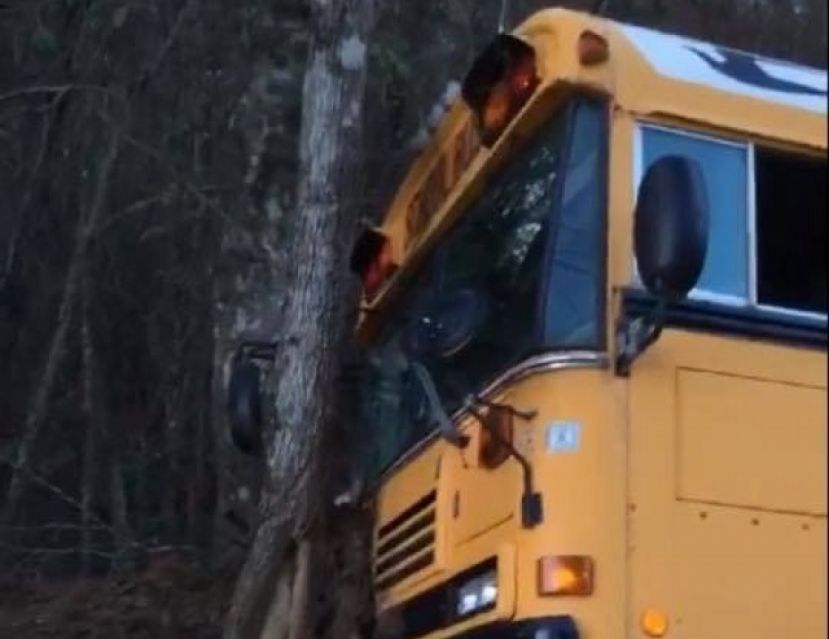 Photo courtesy of the Coffee County Ga. Police Scanner Here is the aftermath of Tuesday's school bus accident. The bus left the roadway and struck a tree.

On Tuesday, Jan. 10, a Coffee County school bus was involved in a one vehicle accident during its morning route near Ambrose. There were two students on the bus at the time of the accident. Neither of the students had any visible injuries; however, one did go to the emergency room after school.

“A veteran driver for the district had just dropped off students at Ambrose Elementary and picked up two students for the middle school and G.W. Carver Freshman Campus.  While traveling on Earl Day Road, the driver stated they had quickly looked at their watch to see if they were on schedule when they veered slightly to the right.  Accidently overcompensating for the error, they went into the ditch and hit a tree.  The driver immediately checked on the two students who said they were fine.  The driver then contacted Mr. Buddy Gilliard, Transportation Director for the district.  With the safety of the students and driver a priority, Mr. Gilliard immediately assessed those involved for injuries.  With no injuries reported, Mr. Gilliard contacted non-emergency 911 and then contacted another driver to transport the students to school.  A Coffee County sheriff’s deputy and Georgia Highway Patrol officer arrived at the scene and did issue a warning to the driver for distractive driving. The school district regrets that parents were not immediately notified.

“Tuesday evening, one of the students complained of injuries and was treated and released at the emergency room. Upon notification, Mr. Gilliard went to the hospital to meet with the parents and check on the child.  Both students returned to school on Wednesday.”