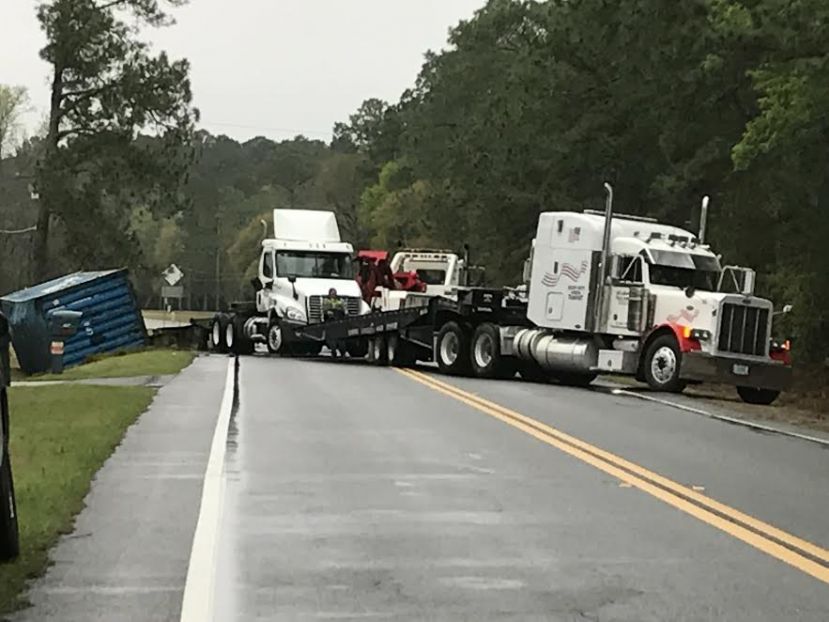 Officers from a host of agencies both local and state have spent the afternoon on Highway 135 near Harvey Vickers Road cleaning up a semi-truck accident that involved hazardous materials.

The truck, a Freightliner Century Class day cab, was traveling toward Douglas on Highway 135 when a vehicle in front of the truck slowed suddenly. The driver hit the brakes in an effort to avoid a collision. The truck was pulling a container and the axles reportedly came out from under the container chassis. The truck and trailer rolled over as a result.

The container was carrying cylinders of liquid hazardous material; however, the liquid did not spill during the accident. The driver was unhurt.

First responders from the Coffee County Sheriff’s Office, Coffee County Fire Department, Georgia State Patrol, City of Douglas Fire Department, local EMS, and the Georgia Department of Public Safety worked the accident scene. At the time this story was posted, traffic was still being detoured around the scene. Delays will likely result for another hour or so at the very least. American Truck Parts of Douglas is cleaning up the accident scene.