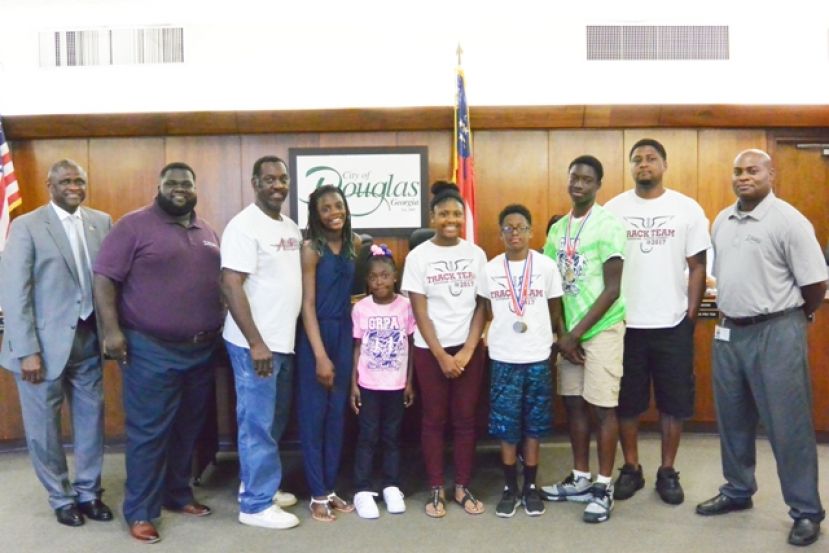 At the May 22, 2017 regular meeting of the City of Douglas Mayor and City Commission, the board took time to honor some of the community’s most exceptional young people. Mayor Tony Paulk presented a citation to Navy Junior Reserve Officers Training Corp Lt. Commander Diana Ortiz in recognition of her service. Lt. Commander Ortiz is a Coffee High School student with great poise and a bright future.

The board also approved a request for an increase in funding for a sewer project in the amount of $48,538.09, bringing the total cost of the project to $336,675.05. The project is underway in the area of East Sellers, Jackson, and Cleveland streets. The money comes from the federal government in the form of a Community Development Block Grant (CDBG) disbursed by the Georgia Department of Community Affairs.

The board also extended the period of time allowed for completion of the sewer project until May 31, 2017. The extra time and money is necessary because the contractor - Douglas Electric and Plumbing Co. - discovered old terra cotta sewer laterals within the city’s right of way. Sewer laterals allow sewage to flow from places of residence and business into the sewer main and from there to the wastewater treatment facility on Iron Road.

The board also approved a request to enter into a contract with Joanne Lott, proprietor of Southern Home Vintage Market (SHVM), in order that the Southern Home Vintage Market may host two events per year at the Central Square Complex and do so on a continuing basis. The terms of the contract are such that the city must waive deposits and administrative and rental fees for the Central Square Complex. The city must also provide staff from the Parks & Recreation Department for setup and cleanup. The city further agrees to provide tables to vendors through SHVM at $10 per table and $15 for sets of two tables, along with electrical service at $10 per vendor. SHVM agrees to be responsible for all food vendors, to process all applications from vendors, and to pay the city 40 percent of door admissions from the March event and 30 percent for the November event.

The mayor and commissioners also agreed to renew a one-year contract with William Minkema. Mr. Minkema will have managed the Martin Centre for one year on June 30, 2017. The renewal requires Mr. Minkema to perform various duties regarding attraction and promotion of events, paying 30 percent of any profit to the city. Mr. Minkema guarantees a minimum amount of $3,000 be paid yearly from events which he promotes. He must further pay 50 percent of any rental income.