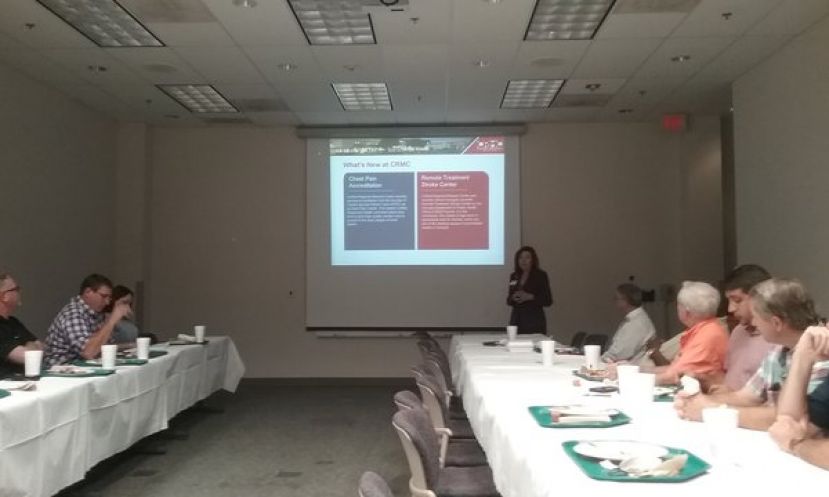 A one-cent transportation sales tax was the big topic of conversation at Monday’s joint meeting between the city, county, board of education, and Coffee Regional Medical Center board of directors. Representatives from those groups, plus a few others, were present. And while the meeting was open to officials from Ambrose, Broxton, and Nicholls, there was no one from those communities present in their official capacity. CRMC hosted the quarterly dinner on this occasion. It is hosted by different groups on a rotating basis.

After a meal from the hospital cafeteria, representatives of each body gave a short presentation. City Manager Terrell Jacobs spoke on the purpose of the meeting and made note of the fact that he has worked in four different communities and this kind of collaboration among official bodies is unusual. CRMC Chief Executive Officer Vicki Lewis presented on work that the hospital is doing. She focused her remarks on a new project in obesity in women and physician recruitment. Ms. Loretta Hylton, Senior Planner for Southern Georgia Regional Commission, gave a presentation regarding the Coffee County and Cities of Ambrose, Broxton, Douglas, and Nicholls Comprehensive Plan. School Superintendent Dr. Morris Leis spoke about the upcoming charter renewal and the Ford Next Generation program at Wiregrass Regional College and Career Academy.

Next, District 169 State Rep. Dominic LaRiccia spoke passionately about the upcoming TSPLOST referendum. The vote is set to take place on May 22, 2018. Rep. LaRiccia encouraged elected city and county officials to support the referendum and to encourage their constituents to vote for it. He said that in his opinion the officials should go very public with their support. If approved it will add a one-cent sales tax. The revenue generated will be earmarked for transportation spending. During his comments

Rep. LaRiccia said that when it came to local transportation construction it was important that state leadership see that communities “have skin in the game.”Rep. LaRiccia spoke with DouglasNow about just what it means to “have skin in the game” and why it’s important for the community. He said that state leadership - the governor, lieutenant governor, commissioner of transportation - wants evidence that communities are willing to fund local infrastructure projects themselves. Rep. LaRiccia said that even if the referendum doesn’t pass in the entire region - which includes 18 counties, Ware, Lowndes, Tift, and Coffee among them - state leadership will look at the individual counties within the region which did approve the measure. “A major component in funding criteria is local investment … It’s taken into high consideration.” He said that state leadership believes, “If communities are willing to invest in themselves, then we should invest with them.”

Rep. LaRiccia went on to say that one of the most difficult decisions that state officials make is whether to get involved in local matters, and transportation is a very important local matter. “Transportation is really a regional matter because roads cross county lines. Coffee County has always been willing to invest its own money, and that helps us draw down state and local funds.”

Jacobs spoke again regarding the need to raise police pay in conjunction with a recent increase in pay for Georgia State Patrol officers. He also spoke about plans for replacing city hall with a new city center.

Mayor Tony Paulk also addressed the assembled officials and spoke on a project close to his heart, the proposed Youth Council. The council is to be composed of 10-12 local high school students. Mayor Paulk said this council will give the young people a chance to be heard by the community’s adult leaders. “Our youth are not lost,” said Mayor Paulk. He went on to marvel over their different skill sets and modes of communication. He proposed that, “maybe they can help us solve some of their problems.”