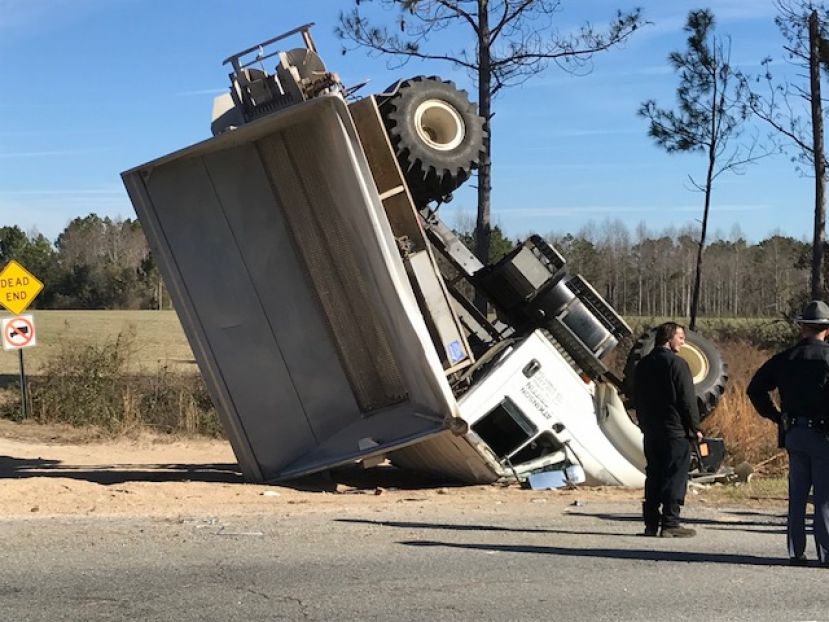 Robert Preston Jr./DouglasNow.com A driver for Atkinson and Griffin in Broxton suffered minor injuries when his load shifted as he made a left hand turn on Alvin Vickers Road this morning.

A driver from Atkinson and Griffin Warehouse in Broxton took a wild ride Tuesday morning as he attempted a turn from Highway 32 West on to Alvin Vickers Road.

The truck was traveling east on 32 toward Douglas, presumably after coming through Ambrose and turning left on 32. As the driver, who was hauling fertilizer, turned left on Alvin Vickers Road, the load in the already top heavy truck shifted, causing the driver to lose control. The truck went into the ditch and spun around, facing west, as it flipped up on its nose.

EMS transported the driver, who has not been identified, to Coffee Regional Medical Center. He sustained minor injuries in the crash. The Georgia State Patrol and Coffee County Sheriff’s Office investigated the scene. American Truck Parts of Douglas moved the spreader truck.