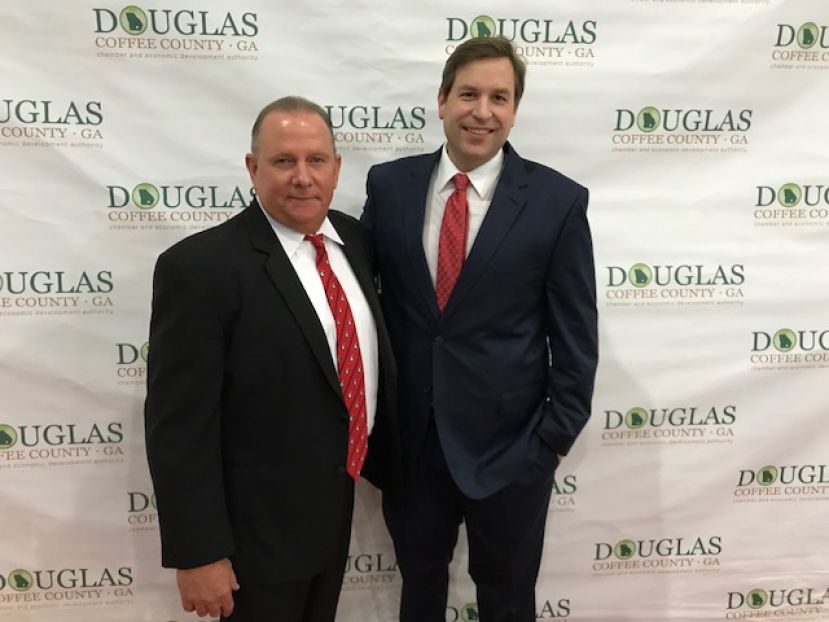 During Lott’s two years, the Chamber celebrated 35 ribbon cuttings, brought in more revenue than any other consecutive two-year period, and grew 238 new members to 702. An emotional Lott recounted the two years he served. Those two years were eventful for the Lott family; in addition to the expected challenges that come with holding such a position, Lott also suffered and made a full recovery from a stroke and, just a few weeks ago, married his long-time girlfriend, the former Vette Stern (who was herself named the Chamber’s Ambassador of the Year).

Accompanied by his wife and his older son, Tyler, the former chairman expressed the sense of fulfillment he enjoyed as chairman. He also stated that he knew he was giving to the reins to an able individual in Bradshaw. “I have been truly blessed and privileged to serve as the Chamber chair,” stated Lott.

Bradshaw, the new chair, is a native of Dublin. He is married to the former Theresa Vincent and together they have three children. Elixir Extrusions became a standalone company in 2015 and will soon add an anodizing plant near the existing spec building across from Wal-Mart Distribution Center.

More in this category: « SGSC is first-ever Community Partner of the Year Local BOE chair named to Georgia School Board Association Board of Directors »
Login to post comments