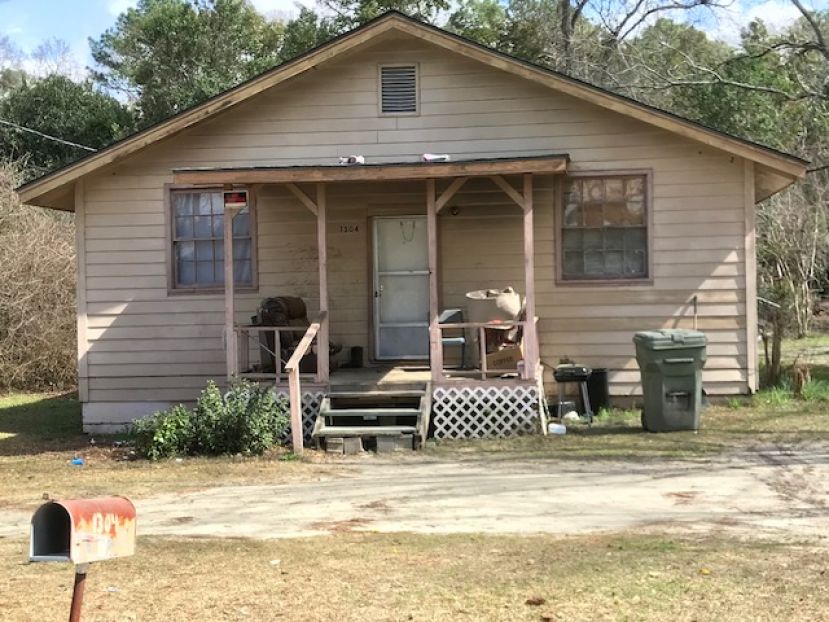 Robert Preston Jr./DouglasNow.com A tragic series of events took place on April 26-27, 2017, at this North Pearl Avenue address. As a result, one individual suffered a nearly fatal gunshot wound and the City of Douglas is now facing a lawsuit.

Here are the basics. On April 26, 2017, at 7:11 p.m., 911 received a domestic disturbance call at 1304 North Pearl Avenue. Two officers, John Derek Young and Sgt. Stacey Williams, responded. Young was first on the scene. Sgt. Williams, Officer Young’s supervisor, arrived after Young. According to the incident report written by Officer Young, the three parties involved were Katina Marie Coon, 35, of 1304 North Pearl Avenue; Isaac Michael Loving of the same address; and Jeffery Fyffe, who had moved into the home at North Pearl the day before.

According to the report, the shotgun was a 20 gauge. In footage seen on Officer Young’s body camera, which DouglasNow.com obtained through an open records request, Fyffe can be seen telling Young that the gun is “probably illegal.” He also tells Young that he fired a blank round, not a live shell. At this point, Young looks to Sgt. Williams, who is off-camera, and asks him if they should look at the weapon and “run the numbers” on it. Williams can be heard saying something to Young but it’s not readily apparent what he said. However, Officer Young didn’t do anything further with the gun, which indicates that Sgt. Williams did not advise him to investigate the shotgun.

The report states that Loving said he would never hurt Coon and had never threatened to hit her. He said he was going back to Florida, though his car didn’t have insurance and he didn’t have a driver’s license. According to the report, then Coon and Fyffe left the location and Loving went back inside the home.

This, however, wasn’t the end of the saga. In fact, it was just beginning.

At 5:11 a.m. on April 27, 2017, another call came in from the same address. This time, it was a gunshot wound. Young and Williams responded again and they were joined by Officer Patrick West and Investigator Ashley Purvis. When officers arrived, the incident report states that Fyffe was crouched over Loving, who had been shot in the stomach, asking Loving why he shot himself.

According to the report, Fyffe and Coon had returned to the home and found Loving sleeping on the couch. The report states that Coon said that she tried to wake Loving but he had taken too many Xanax and was groggy. She told Loving he could sleep in the bed with her. Loving eventually woke up and went to the bed. However, when he saw Fyffe in the bed with Coon, he became irate and started throwing things. Loving asked Fyffe where the shotgun – the sawed-off 20 gauge from earlier in the day – was located. Fyffe told him it was in the car. Loving grabbed Fyffe’s keys and headed outside.

The report states that initially, Fyffe said that he heard a boom outside. He went out and found Loving on the ground with a gunshot wound to the stomach. Fyffe states in the report that Loving apparently had shot himself. This isn’t in the report but further investigation found that Loving did not shoot himself. Police charged Fyffe with Loving’s shooting. He was charged with aggravated assault, unlawful possession of a firearm, and possession of a firearm during the commission of a crime.

Loving was treated for his injuries and is still recovering nearly a year later. Fyffe posted bond and was released from jail. He had a court appearance on Oct. 12, 2017, but did not show. He is believed to have fled the state and authorities also believe that Coon is with him.

The case is still far from over. One important fact that can’t be overlooked is that in the first call, Fyffe admitted that he had an illegal weapon and he was allowed to leave with the gun. Had officers either confiscated the gun or arrested Fyffe for having an illegal weapon, Loving would not have been shot several hours later.

After watching Young’s body camera video, Whitley asked Williams about Young’s question to him regarding the shotgun. When asked why neither officer did anything with the gun, Williams stated that Young was the lead officer on the scene not him. “Derek had the call. When Derek said that, he was answering the call. My thing was to back up because of the shots fired call . . . My focus was on figuring out what Derek was going to do with the call. It didn’t cross my mind about as far as because there’s other times folks have said they’ve had guns and we hadn’t ran them,” said Williams. Throughout the interview, Williams maintained that Young was the primary officer on the call, that Williams had backed off and didn’t even hear much of the exchange with Fyffe about the shotgun.

As the interview neared its conclusion, Whitley addressed the primary reason for the internal affairs investigation in the first place. “The whole thing, I think, is going to boil down to this: If we had done a little better investigation and we had checked the gun – and there’s a lot of ifs in here – if we’d done that, it was very obvious that the gun didn’t meet the parameters of what state law requires on the length. So if that had been the case, he could have been arrested for possession of a sawed-off shotgun , the gun would have been collected as evidence . . . that person and that gun would not have been at the scene at 5:11 in the morning,” said Whitley. It sounds as though Williams stated, “Umm humm” in response to Whitley’s statement.

In spite of that, Williams never changed his stance on the investigation. Near the end of the interview, Whitley asked Williams, “Do you think it should have been handled any differently?” Williams replied., “I didn’t answer the call. It was not my call.”

Sgt. Whitley also interviewed Young, who by the time of the interview had left the department. Young’s interview lasted longer than Williams’s did. After a lengthy discussion, Whitley asked Young a question similar to what he asked Williams. “Looking at it now, do you think it should have been handled differently,” asked Whitley. Apparently, Young nodded in agreement; after a few seconds of silence, Whitley stated, “I do, too. I believe it should have been handled differently.”

At the close of the internal affairs investigation, both Chief Casteloes and deputy chief Brannen Pruette met with city manager Terrell Jacobs at different times. Casteloes and Pruette both recommended disciplinary action for Sgt. Williams. Both Casteloes and Pruette also noted that Jacobs stated that he didn’t want Williams disciplined. Pruette met with Jacobs first and made the following notation: “I informed [Jacobs] that Sgt. Williams failed to supervise and I found his attitude to Sgt. Whitley was inappropriate and his responses were inappropriate. I informed him that in my opinion Sgt. Williams violated policy and is liable. I stated that we needed to take appropriate disciplinary action because his actions were in violation of policy . . . I told him based on what I read he at a minimum should be demoted but that would be a decision the chief would have to make. Mr. Jacobs then informed me that he didn’t think there needed to be any disciplinary action taken that this was just a training issue.”

Chief Casteloes made similar notes in the file: “I advised [Jacobs] in my opinion it was clearly a lack of or failure to properly supervise and that we needed to address it as a disciplinary action. Mr. Jacobs disagreed and stated it was a training issue and should be addressed in that manner . . .”

Friday morning, DouglasNow.com spoke with Jacobs and asked him why, after reviewing the findings of the investigation, he maintained that no disciplinary action should be taken. Jacobs didn’t directly address the fact that he had recommended no discipline be taken. “The process we normally have is once the internal affairs investigation is done, the department head makes the recommendation regarding discipline. It’s relative to what the department recommends,” he said. Jacobs added that he is waiting for Chief Casteloes to recommend corrective action. “There is due process. I don’t make disciplinary actions,” he stated. Jacobs also said that another officer in the department besides Williams could be disciplined as a result of this investigation though he didn’t say who that might be.

Here is then-Douglas Police Officer Derek Young's body camera footage from the April 26 domestic disturbance call on North Pearl Avenue. To hear the exchange about the shotgun, fast forward to around the 3:00 mark. Video courtesy of the Douglas Police Department
Last modified onFriday, 16 February 2018 22:32
Tagged under