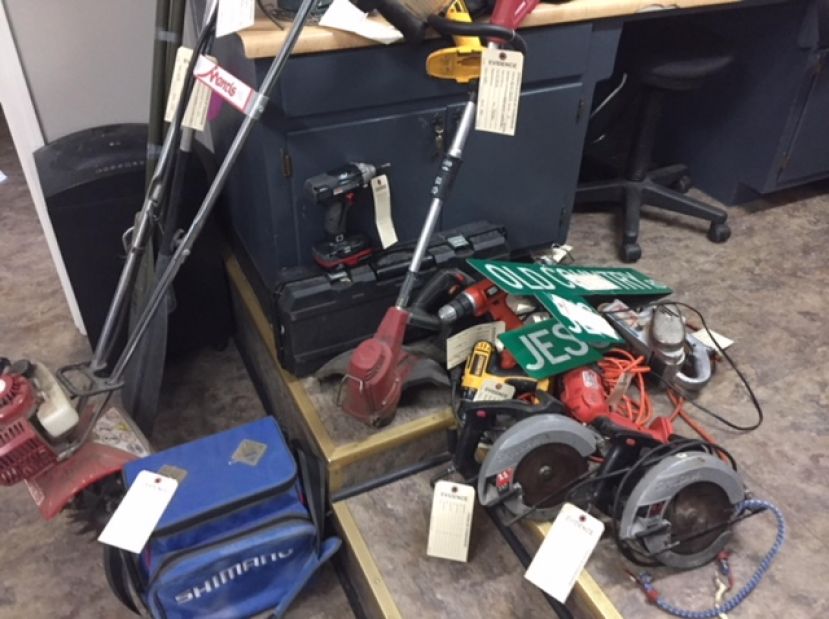 Thursday, March 29 was a bad day for Jesse David Floyd, 29, a suspected drug dealer and thief in Broxton. But it was a great day for the victims from which he allegedly stole, who just might get a portion of their stolen property back.

On Thursday March 29, officers from the Broxton Police Department were attempting to serve a felony probation warrant on Jesse Floyd at 450 Ocmulgee Street Lot A-15 when Floyd jumped out of a window in the rear of the residence and began to run from the scene. A brief foot pursuit ensued in which Floyd was quickly apprehended in a wooded area nearby.

A search of Floyd’s home revealed marijuana, methamphetamine, and prescription medication of various types located in several different locations inside the residence and syringes that tested positive for methamphetamine. Also, while searching the residence the officers located several cordless power drills, several skill saws, two sawzalls, a belt sander, a small hand-held sander, a walk-behind tiller, a weedeater, a large tool box with a large number of tools inside and various other random items that were suspected to be stolen, including two county street signs.  Some of the power tools were found to have different initials carved into them leading the officers to believe that they had been taken from other residences.

Floyd was arrested at the scene and is currently being held at the Coffee County Jail for the following charges with more charges possibly to follow: felony probation violation, possession of methamphetamine, possession of marijuana, possession of drug related objects, obstructing a law enforcement officer, misdemeanor theft by taking (five counts), and felony theft by taking.

Broxton Police Chief Scott Harper stated that there has been a rash of burglaries and thefts in the Broxton area over the last few months and it is believed to be the work of multiple individuals working in a theft ring. Chief Harper stated, “My officers and I now have the names of others involved in these thefts and we are not going to sit back and wait for them to strike again. We are going to be aggressive on our stance with thieves just like we are with drug dealers. In almost every situation, the two are related." Chief Harper ended by saying that he was very thankful for the quick response to assist the Broxton officers from two Coffee County sheriff’s deputies when he put out the call over the radio that the officers were in a foot pursuit.