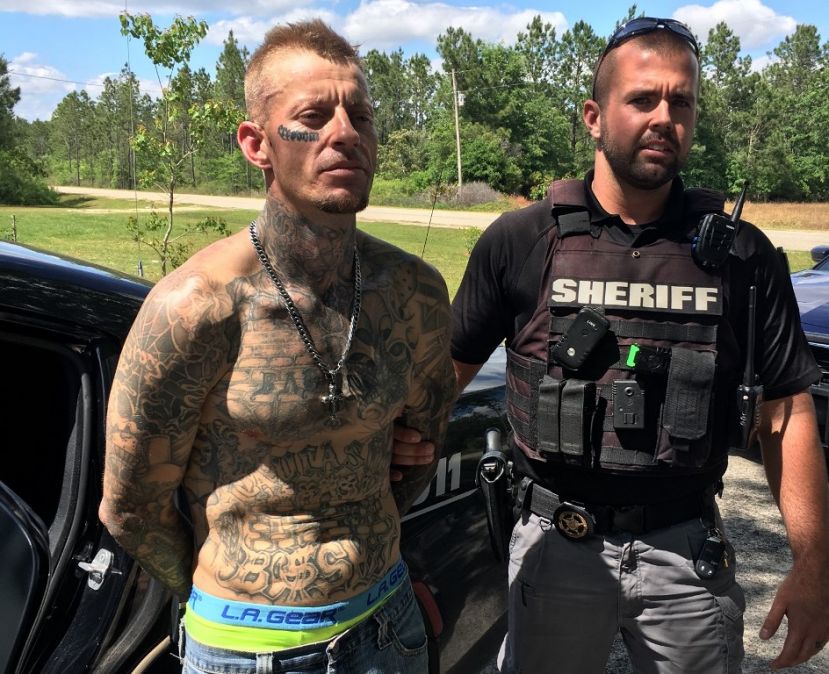 Submitted photo Officers arrested Jeremy Ely Gaskins after he and a passenger in his vehicle attempted to elude authorities Wednesday.

Running from the law usually doesn’t end well for those who are trying to escape. Just ask Jeremy Ely Gaskins and Garrett Zackary Adams, both of whom were apprehended after Gaskins allegedly attempted to outrun police, first in a vehicle then on foot.

The two men are in custody after fleeing from the Douglas-Coffee HEAT Unit Wednesday morning, leading to an aerial and foot pursuit that lasted through mid-afternoon. Gaskins, 34, fled from officers attempting to make a traffic stop near West Green. Gaskins led officers on the chase before fleeing on foot in the area of Fire Line Road near the Jeff Davis County line.

County law enforcement, assisted by the Georgia State Patrol Aviation Unit, located Gaskins several hours later in a wooded area. Gaskins was arrested and transported to the Coffee County Jail. He was wanted on three felony probation warrants stemming from previous charges including sale of methamphetamine and burglary. Gaskins faces additional charges in relation to this incident, including felony fleeing, obstruction, and multiple traffic violations.

Adams, 25, who was in the vehicle with Gaskins, was also arrested and faces charges of obstructing law enforcement.

More in this category: « Police are looking for 19-year-old who fled a traffic stop GBI searches pond for weapon in Pearson double murder »
Login to post comments