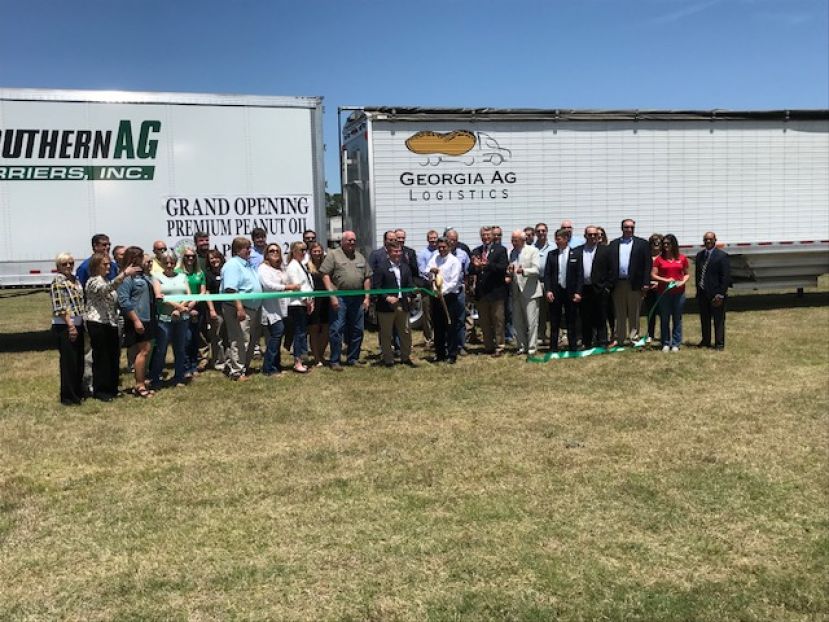 Robert Preston Jr./DouglasNow.com After lunch and a series of speakers, including agriculture commissioner Gary Black and U.S. Rep. Rick Allen, Premium Peanut management and partners cut the ribbon to signify the grand opening of the new peanut oil mill.

“We built the shelling plant to get some value out of a peanut . Now we’ve built the oil plant to get more value out of that peanut. Down the road, the goal of the board and management is to continue to find more value in the peanut to get for our owners and not to be a cookie-cutter sheller but to be a little out of the box and get some new products. We’re working every day toward that,” said Kent Fountain, Chairman of Premium Peanut’s Board of Directors, at Monday afternoon’s ribbon cutting and grand opening of Premium Peanut’s new oil mill.

Premium Peanut began as a shelling-only plant in January 2016. In two short years, the facility has experienced phenomenal growth; this latest expansion is but one indicator of the company’s unprecedented success. The oil mill is expected to produce over three million gallons of peanut oil per year.

“We are proud of what we’ve accomplished in terms of creating jobs – over 200 – and the investment we’ve made. We’re close to $100 million in direct investment to make this business work,” said Karl Zimmer, Premium Peanut President and CEO. He also stated that Premium Peanut ships to 25 countries all over the world from Douglas.

Several hundred people from throughout the region as well as Premium Peanut customers from around the world attended Monday’s event. They were treated to a catered lunch and then, after the speakers, tours of the shelling plant and the new oil mill.