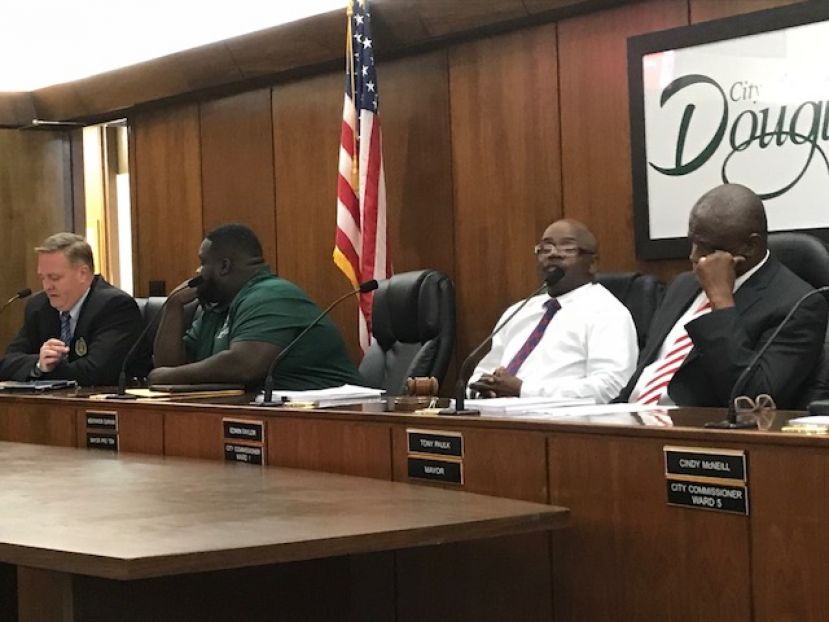 At Monday night’s regular city commission meeting, a few commissioners offered an explanation as to why their meal expenses were so high at the Georgia Municipal Authority annual conference in Savannah during June. A DouglasNow.com story that appeared on the site over two weeks ago listed the expenses incurred by the commissioners who attended the conference. Two officials – Commissioner Bob Moore and Mayor Tony Paulk – did not attend.

Monday, Mayor Paulk presented the commission with 10 items that, if passed, would, among other things, limit the amount of money an elected official could spend on meals during an official city trip. The list had several different components, the most important of which was a $60 per diem for officials’ meals. Two commissioners, Cindy McNeill and Mike Gowen, wanted to adopt the mayor’s guidelines. Four others – Bob Moore, Olivia Pearson, Edwin Taylor, and Kentaiwon Durham – did not.

The reason for the mayor’s suggested guidelines is because the expenses most of the commissioners turned in for their meals at the GMA conference appeared too high. Two commissioners – McNeill and Gowen – had much lower meal expenses than the other three commissioners.

According to Commissioner Olivia Pearson, whose meals totaled nearly $340 for the conference, there’s a good reason why. “When you read whatever somebody might print, you need to find out for yourself if they are printing what is actually accurate. What Mr. Preston printed on Douglas Now was incorrect. He made it to appear what was shown was for one person and that was not the case. Saying that, I’m going to agree with Mr. Moore to leave as is,” stated Pearson. She did not elaborate on who the other people might be.

Commissioner Durham, however, did.

“It was not just one person eating,” stated Durham. He went on to say that former city manager Danny Lewis had a policy that allowed commissioners to take their spouses on official trips and charge their spouses’ meals to the city as well. Commissioner Pearson agreed with Durham, that the former city manager allowed family members to eat at the city’s expense as well. DouglasNow.com reached out to Lewis via social media Tuesday afternoon in an effort to find out exactly what, if any, family meal policy the city had during his tenure. At the time this story was posted, he had not replied.

Commissioner Taylor spoke up, stating that he had heard in the past that spouses were allowed to charge their meals to the city. Recently, however, he was hearing it was family members, not just spouses. “If that be the case, if we’re going to open it up to the family, we can have a family reunion there,” he said. Commissioner Pearson then stated that “we could discontinue family” from eating on the city’s dime. She then added that in Savannah, she put meals for her and her ex-husband on her city expense account but she paid out of pocket for her children’s meals. (Commissioner Pearson also said, early in her remarks, that a $60 per diem for meals was not sufficient.)

Commissioner Gowen went through each of Mayor Paulk’s 10 points and said that for the most part, he agreed with them. As the discussion came to a close, two things were apparent: 1) Commissioners have been charging one or more family members’ meals to the city during city trips, costing the city thousands, if not tens of thousands, of dollars over the last several years; and 2) four of the commissioners – Bob Moore, Olivia Pearson, Edwin Taylor, and Kentaiwon Durham – don’t see the need to put a stop to it.

More in this category: « APD announce arrests for the week of August 20, charges ranging from loitering to DUI Attempt to effectively micromanage the police department fails at commission meeting with 4-2 vote »
Login to post comments