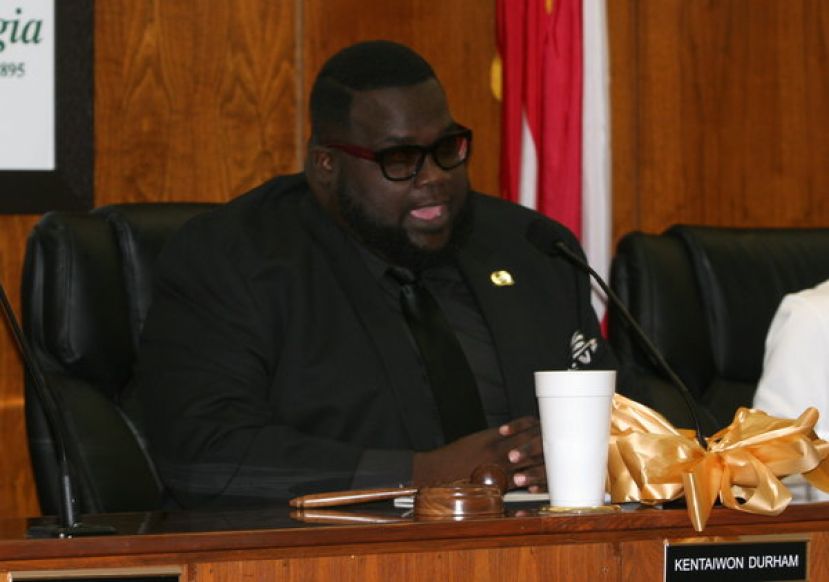 At Monday night’s Douglas city commission meeting, Ward 2 commissioner Kentaiwon Durham addressed his arrest in the early morning hours of Friday, Sept. 21, 2018, on Shirley Avenue. Earlier Monday, Commissioner Durham had made a few statements regarding the arrest on a Facebook live video he posted on his private Facebook page. His comments Monday night, however, were the first had made in a public setting.

Durham’s comments came at the end of the meeting during a time set aside for the mayor and commissioners to make any public statements they deem appropriate. The video below shows Durham’s comments.

During his comments, he made several false statements, not the least of which was how he began his statement. Durham insisted that he was stopped for not having his driver’s license on his person, which wasn’t the case. According to the incident report obtained from the Douglas Police Department, Durham was stopped because the tag light on the car he was driving was not working. During the stop, officers discovered that Durham’s driver’s license was suspended due to an unresolved traffic ticket from Lowndes County.

Later Friday, Durham took care of the issue in Lowndes County and his driver’s license was reinstated. As a result, according to officials, Durham’s charges in Douglas were reduced to driving without license on person.

During Monday’s Facebook live video and at the commission meeting, Durham stated repeatedly – and falsely – stated that he had been stopped for driving with his license not on his person. He made other erroneous statements regarding DouglasNow not using mug shots of commissioner Bob Moore following his citation for a traffic violation in October of 2016 (Moore wasn’t arrested and as such, there was no mug shot to use) or former probation officer Steven Pitts, who was charged with allegedly stealing probation fees from probationers earlier this year (Pitts was booked out of county by the Georgia Bureau of Investigation and no photo was available).

Durham also accused of DouglasNow.com of not printing other, in his opinion, more newsworthy stories in favor of his less important traffic stop. Durham was apparently referring to a shooting that occurred in the city over the weekend that left one person injured and a suspect on the run. The Douglas Police Department released information regarding the shooting Tuesday morning – about 12 hours after the commission meeting ended.

More in this category: « Judicial circuit gets new assistant district attorney Suspect wanted in Jenkins County could be headed to Coffee County »
Login to post comments