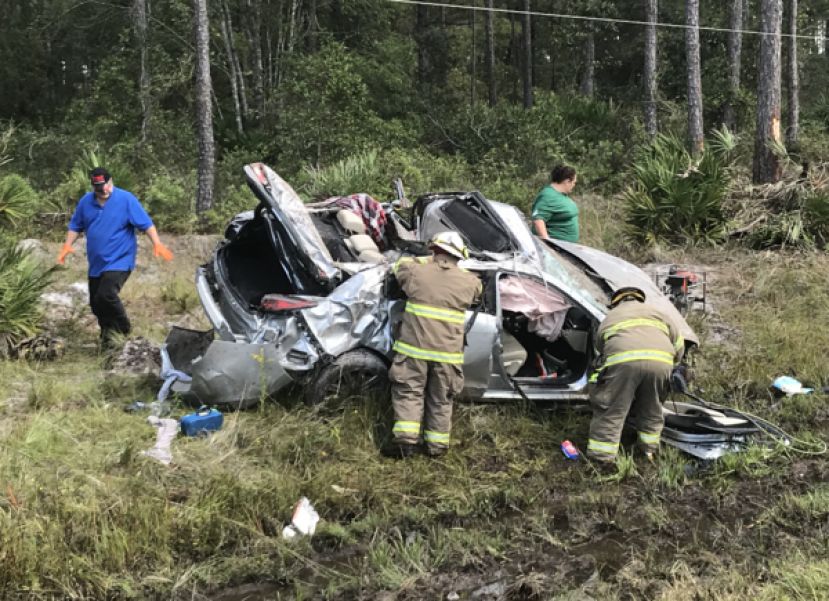 Photo courtesy of the Ware County Sheriff's Office via the Waycross Journal-Herald This is a photo of the car involved in Sunday's crash in Ware County that seriously injured a Douglas woman and killed a passenger wanted for armed robbery.

This story originally appeared on the front page of the Monday, Oct. 8, 2018, edition of the Waycross Journal-Herald. It is reprinted here with permission.

A Pembroke man wanted for armed robbery was killed and a Douglas woman was seriously injured Sunday when their car crashed on U.S. 1 near Fort Mudge in Ware County as it was being pursued by lawmen from Charlton County, said Ware County Sheriff Randy Royal.

“The driver either hit the stop sticks or veered to avoid them and wound up in the median,” said Royal. “She then over-corrected the steering and the vehicle skidded back across the northbound lanes and onto the east shoulder and then into the ditch where it made a 180-degree turn. The car then struck a Georgia Power pole, clipping it in half, went airborne and struck three pine trees before coming to rest on the shoulder embankment.”

The passenger, Hannah Coleman, 35, of Pembroke, died in the 1:12 p.m. crash, said Royal. He was pronounced dead at the scene by Ware County Coroner Atha Lucas. Royal said his body was found in the back seat of the car, a 2018 Mazda.

The driver, Sauntierra Freeman, 35, of Neal Drive, Douglas, was airlifted from the scene by AirEvac to UF Health in Jacksonville, Fla., with serious but unspecified injuries, said Royal.

Coleman was wanted in Glynn County on armed robbery charges and in Jacksonville, Fla., on an outstanding warrant, said Royal. He said the chase started when a Charlton County deputy sheriff clocked the car at nearly 20 mph over the speed limit.

“The Ware County Sheriff’s Department was dispatched at 1:12 p.m. to U.S. 1 South at mile marker 5, the northbound lanes just inside Ware County,” said Royal. “Deputy Douglas Popps, of Charlton County, said he clocked the car going 84 in a 65 mph speed zone northbound on U.S. 1 in Charlton and tried to make a traffic stop, but the driver sped away, reaching 118 mph.”

Found in the car were a brown Gucci bag holding a quantity of powder cocaine and a Bushmaster AR-15 with a loaded .45-caliber magazine. Also in the car was a set of digital scales, a camouflage mask, camouflage pants and a supply of baggies used for dispensing drugs, said Royal.