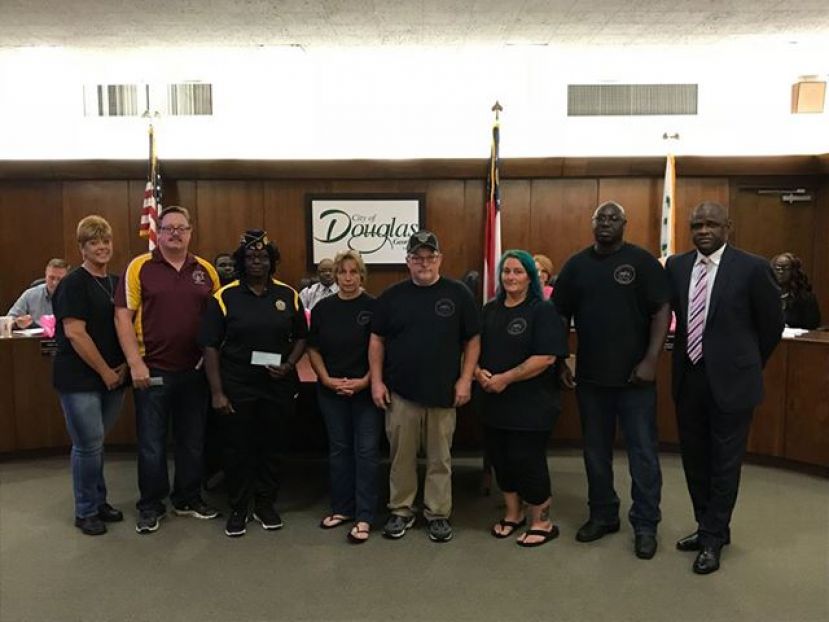 Robert Preston Jr./DouglasNow.com Monday night, members of the Helping Hands Bikers, the organization that hosts the motorcycle events at the city's outdoor expo and barbecue festival, presented the Coffee High Band Boosters and the American Legion with donations raised at this year's motorcycle show at the festival.

At the Douglas City Commission’s previous meeting, the commission tied 3-3 on two items related to the city’s alcohol ordinance. Because the votes ended in a tie, commissioners had to re-visit those items at Monday’s regular commission meeting.

The first ordinance defined a pub and would allow alcohol to be served in such an establishment. A pub is smaller than a restaurant, serves a limited menu, and offers entertainment inside. Alcohol would also be served inside the pub. This item passed 4-2, with commissioners Cindy McNeill, Edwin Taylor, Kentaiwon Durham, and Olivia Pearson voting in favor. Commissioners Mike Gowen and Bob Moore voted against it.

The second item would allow individuals to drink one alcoholic drink while outdoors during special city events. The new ordinance includes some very specific language as the circumstances under which this can happen. Once again, this item ended in a 3-3 tie with Mayor Tony Paulk casting the deciding vote in favor of the new ordinance.

Commissioners also approved several items on the consent agenda and did not approve another item. Among those approved were:

Commissioners also rejected an item on the consent agenda by a 4-3 vote. Earlier this year, the city awarded East Coast Asphalt the bid for the 2017 LMIG paving projects. In August, the city learned that East Coast had gone over on the asphalt leveling by 389.3 tons, an amount equal to $33,285.15. Utilities director Mike Hudson brought the item to the commission for guidance as to whether or not to pay for the over-run. After discussion, the commission voted 4-3 not to pay the extra $33,285.15. Commissioners Gowen, Moore, and McNeill voted to pay while commissioners Pearson, Taylor, and Durham voted not to. Mayor Paulk once again broke the tie, voting not to pay for the extra asphalt.