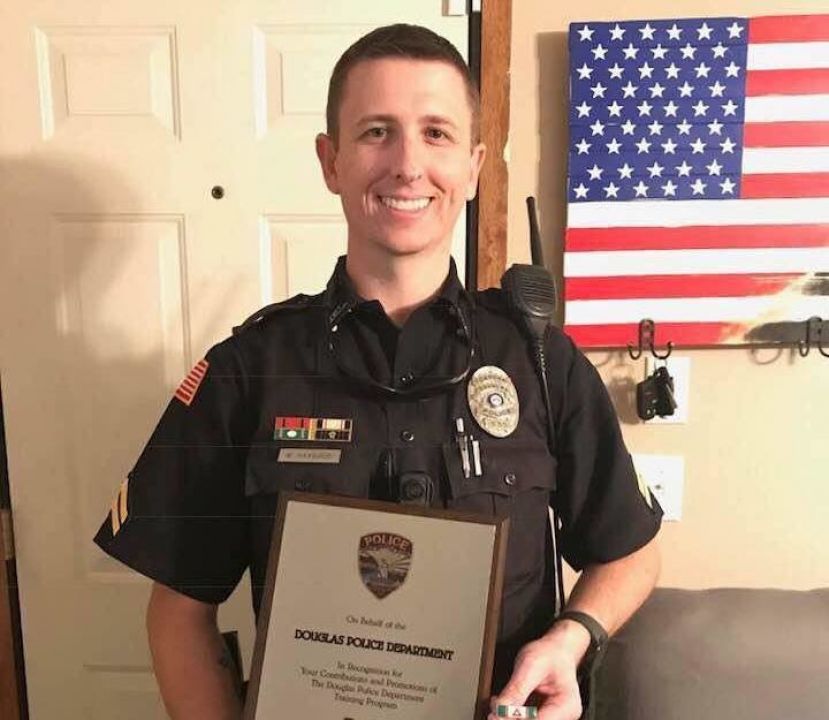 A Sunday afternoon foot chase left a Douglas police officer dazed and bloodied – but with the suspect apprehended.

A citizen sent the following video to the Coffee County Ga. Police Scanner Facebook page. Douglas police officer Brandon Haygood was dispatched to Flash Foods in reference to a subject named Leo being at the location. Leo had been banned from Flash Foods and he had also allegedly shoplifted prior to Haygood's arrival. Officer Haygood got out with Leo on South Coffee Avenue just off Baker Highway and confronted him. Once 911 confirmed that the complainant at Flash Foods wanted to press charges, Leo began to run. Haygood followed behind him in his car. Leo went to S&P Food Mart on the corner of South Gaskin Avenue and Cherry Street. That's where Haygood finally caught up with Leo.

And that's also where the video begins. As Officer Haygood was getting out of his car, at least one person can be heard telling Leo to run. Others are telling Leo not to run. Leo decided to take his chances and he took off. Officer Haygood gave chase. The two crossed South Gaskin Avenue, which is where Haygood finally caught Leo. Haygood tackled Leo and, in the process, hit his head on the curb, opening up a wound. Other officers arrived on the scene during the final chase and assisted with apprehending Leo. Several citizens came over to help Officer Haygood after Leo was cuffed. They can be seen in the video helping him to his feet. Haygood received four stitches and suffered a concussion. Leo was charged with shoplifting, criminal trespass, misdemeanor obstruction of an officer, and littering (he threw down a drink he had allegedly stolen before he started running).

According to a Facebook post made by Diewanna Robinson, she admitted to telling Leo to run because "my sister was scared they was gone tase or shoot him." As the video shows, Officer Haygood apprehended Leo without doing either one.