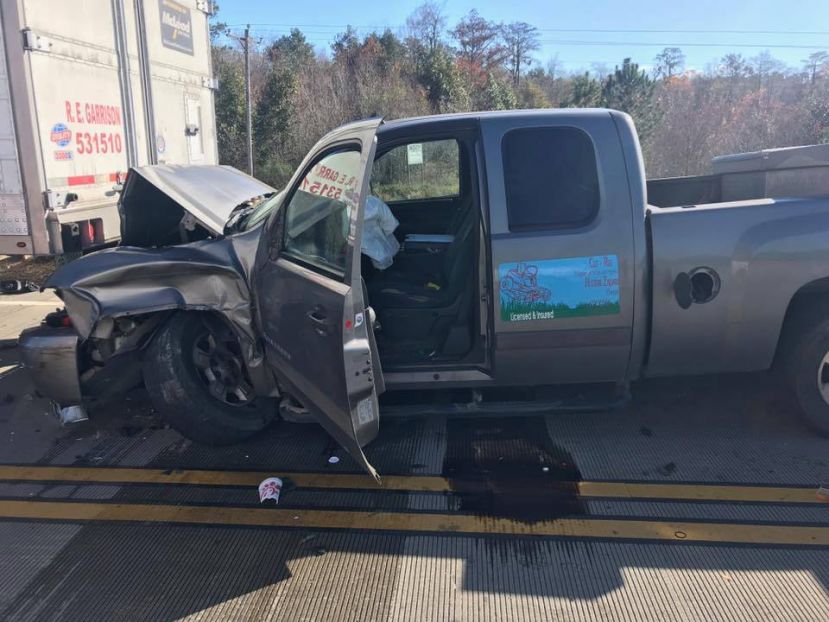 Photo courtesy of the Coffee County Ga. Police Scanner Facebook page This is the truck that Leon Shank allegedly stole in Valdosta and crashed near Pearson after a multi-county high speed chase yesterday.

Yesterday morning, a high speed chase ended in spectacular fashion on Highway 441 just south of Pearson. The suspect, identified as Leon Shank, allegedly stole a vehicle in Valdosta then led law enforcement on a multi-county chase that ultimately ended on the bridge just outside of Pearson. At least three vehicles – the stolen truck and two Atkinson County Sheriff’s Office vehicles – sustained serious damage.

The Coffee County Ga. Police Scanner Facebook page posted a short interview with Atkinson County Sheriff David Moore about the chase. Here is what Sheriff Moore had to say:

“I've had all afternoon to reflect on the afternoon's events. We had a stressful day going on with a jury trial happening when we got the call that a maniac who has been identified as Leon Shank was headed to Pearson at a high rate of speed. He had run from Valdosta to Statenville, through Homerville to God knows where. He was driving with reckless abandon with no indication of stopping. All I could think of was this guy could not be allowed to enter Pearson or Douglas with all our intersections to blow through if he did get through he could kill someone.

“I asked Buddy, Daniel, and Justice to shut down the bridge and not let him in. I knew in my mind that it could mean a vehicle could be torn up. I told the guys to be very careful and to not let that idiot hurt them. Troupe and I had to stay at the trial. I worried, paced, and stayed on the phone with the guys and and prayed God would keep them safe.

“I am so proud of my guys. They do so good and try so hard to serve and protect Atkinson County. This idiot never let off the gas. Daniel said he steered right in the wide open. They had to get over the bridge guardrail for safety. The thought of all of this scares me. I worry about the public but I really worry about my knotheads (my deputies also). Thanks, guys, for always going that extra mile to protect our family, friends, and neighbors God bless each of you.”

More in this category: « One person shot on Roper Street, no arrests Officers make arrest in Dec. 2 shooting »
Login to post comments