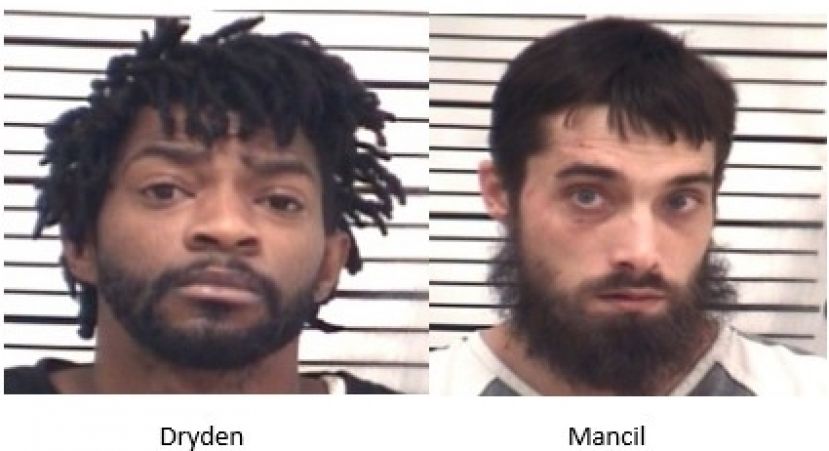 DouglasNow.com file photo Michael Mancil, right, was charged Wednesday in a bizarre case from 2016 that involved a plot to allegedly blow up the HAARP facility in Alaska. James Dryden Jr., left, was arrested with Mancil but has yet to be sentenced.

Wednesday afternoon, Michael Mancil, 32, who was charged with numerous violations in October 2016 when authorities arrested him, along with James Dryden, Jr., after learning the two men were purchasing a large amount of firearms and ammunition. After making the arrests, officers learned that Mancil planned to overtake and destroy the HAARP facility, located in Gakona, Alaska.

Wednesday, Mancil was sentenced to 15 years, five of which will be served in prison, for count one, which was selling methamphetamine. For count two – possession of a firearm during the commission of a felony -- Mancil was sentenced to five years’ probation, which will be served consecutive to count one. He will also be given credit for time served, which is approximately 18 months. So Mancil will serve about 3 ½ years in prison and spend the following 15 years on probation.

In 2016, county law enforcement convened a surveillance operation at a residence located at 206 Jim Road off the Ga. 206 Connector after learning Mancil and Dryden might be planning to leave town. Officials stated they observed the two loading a number of items from the home into a truck and, before they could leave, decided to utilize a SWAT operation to detain the men.

Both were apprehended without incident and taken to the Coffee County Jail. Investigators discovered and confiscated four AR-15 rifles at the residence, along with four Glock handguns, a Remington rifle, and approximately 3,000-4,000 rounds of ammunition.

Upon being interrogated at the sheriff's office, Mancil allegedly detailed a bizarre plan to overtake the HAARP facility, located in Gakona, Alaska. According to Wikipedia, "The High Frequency Active Auroral Research Program (HAARP) was an ionospheric research program jointly funded by the U.S. Air Force, the U.S. Navy, the University of Alaska, and the Defense Advanced Research Projects Agency (DARPA),designed and built by BAE Advanced Technologies (BAEAT). Its purpose was to analyze the ionosphere and investigate the potential for developing ionospheric enhancement technology for radio communications and surveillance."

HAARP ceased operation in 2014, and ownership of the facility and its equipment was subsequently transferred to the University of Alaska - Fairbanks. The facility has been the subject of numerous conspiracy theories over the years including allegations of weather manipulation and mind control.

Coffee County Sheriff's Investigator Michael Vickers stated Mancil believed the facility was "storing people's souls," preventing them from going to heaven. He intended, Vickers said, "to blow up the machine" in order to free the souls that were trapped.

Mancil and Dryden were each charged with selling methamphetamine, possession of a firearm during the commission of a crime, and misdemeanor marijuana possession. Mancil was additionally charged with use of a telecommunication device in commission or facilitating of an act which constitutes a felony.

Dryden has yet to be sentenced.