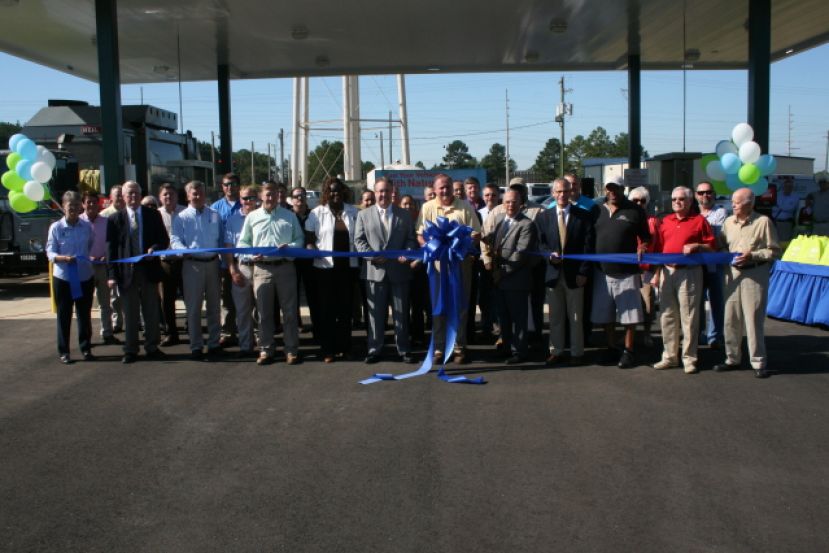 “As I have sat here and listened to everyone speak, I keep thinking about two things: Vision and leadership. That is what I see here today. The future isn’t a place we’re going; it’s a place we’re creating. And I applaud the city for being an innovator in this area,” said JoAnne Lewis, president of the Douglas-Coffee County Chamber of Commerce and Economic Development Authority, at the City of Douglas’s ribbon cutting celebrating the opening of the compressed natural gas (CNG) facility Wednesday morning.

The ribbon cutting marked the grand opening for the facility, which has actually been fueling vehicles that operate off compressed natural gas since Aug. 21. The CNG facility is the culmination of a vision that began over two and a half years ago. As more and more municipalities and private businesses search for alternative fuel sources, CNG keeps surfacing as one of the most cost-effective and cleanest fuels available. Likewise, many governments, fleets, and other businesses are converting their vehicles and operations to CNG. One of the most significant industries in the South Georgia area to do this is the Langdale family of businesses in Valdosta-Lowndes County.

To make the project a reality, the city needed an anchor customer to sign on. That customer came in the form of TransWaste, whose parent company had converted several tradition fleets in North Carolina to CNG. Locally, all of TransWaste’s trucks will operate off CNG. The city is also converting five trucks and two police cars to CNG, bringing the city’s total of CNG vehicles to eight.

Other vehicles that travel to Douglas will be able to fuel at the CNG facility as well. Thus far, several commercial trucks of different sizes have already utilized the facility as they came through Douglas on their routes. According to a brochure handed out at the ribbon cutting, CNG can reduce exhaust emissions of carbon monoxide by 70-90 percent, non-methane organic gas by 50-75 percent, nitrogen dioxides by 75-95 percent, and carbon dioxide by 20-30 percent. “This is an exciting time and it’s a dream come true for a lot of folks in the city. This is an invaluable resource for the city to take advantage of and it will have benefits for private businesses and other governments as well,” said Mayor James Dennis.

“The city and county here are well-positioned to be a leader in this arena, and they are on the forefront of the proving ground for the future,” said Don Collins of Waste Industries, TransWaste’s parent company.

The city partnered with Phoenix Energy of Pell City, Ala., to construct the fueling station. Charles Lewis of Douglas built the facility – the first such of its kind that the company had ever constructed. In the process, a number of local sub-contractors assisted with the work.