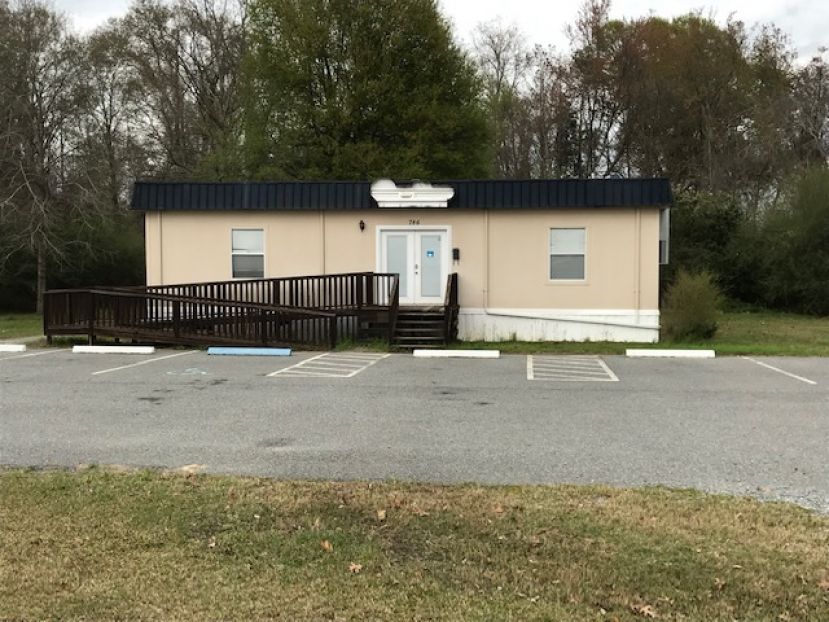 Robert Preston Jr./DouglasNow.com Commissioners approved a rezoning request for this piece of property on Thompson Drive, which will be a used car lot.

The work session of the City of Douglas Mayor and Commission began at 6 p.m. on Monday, February 25. Commissioner Mike Gowen was absent due to illness. Commissioner Olivia Pearson was also absent though she did come in before the meeting ended. The sometimes-contentious meeting covered several important items of business, including a heated discussion between Michael Clark, the Mayor and Commission, and several city employees.

After removing a change to city ordinance from consideration so that the change might be revised, the Mayor and Commission discussed conflict of interest requirements for the 2019 Community Development Block Grant (CDBG) application. The CDBG application is seeking federal funds to be used for paving five dirt roads in the Hollywood Road area. Federal regulations require that any employee or elected official of the city government who could be affected in any way by the development of the Hollywood Road area must disclose how they might be affected to the Georgia Department of Community Affairs. All those commissioners present stated that they had no immediate family living there, nor did they have any property interests in the area. The discussion was carried forward to the regular meeting.

Next the board discussed rezoning 786 Thompson Drive. Todd Winkler has requested that the parcel be rezoned from heavy industrial to light industrial. Community Development Director Georgia Henderson told the board that Mr. Winkler plans to operate a used car lot at the location and that the Planning and Zoning Commission had already approved the change. The request was approved and placed on the consent agenda.

City Manager Charles W. Davis presented discussion of city building projects, most notably the projected September 2020 completion of the new City Hall. As discussion of this matter was wrapping up Commissioner Olivia Pearson arrived. Time was taken to bring Commissioner Pearson up to speed on the proceedings so far. As to the building projects, Commissioner Pearson stated that certain citizens had expressed to her their concerns; namely that Harper/Lewis as construction managers of the project were getting “a fee off the top.” City Attorney Jerome Adams and Manager Davis explained the Construction Manager at Risk (CMAR) process under which the project is proceeding. Commissioner Kentaiwon Durham allowed that this had already been described to his satisfaction. The discussion was put to rest.

During the period for general comments business owner Michael Clark came forward to present his concerns about the city’s “brown bagging” ordinance. Clark operates a business in the city of Douglas under a restaurant license. He was concerned regarding the wording of the ordinance. He was quite certain that the wording did not make it illegal for him to rent his restaurant out for private functions. After a very great deal of sometimes heated discussion involving Clark, Manager Davis, City Attorney Adams, Director Henderson, members of the board, and City Marshal Rodger Goddard, the matter was finally laid to rest.

Because of the brown bagging controversy, the regular meeting of the Mayor and Commission was called to order six minutes later than the scheduled starting time of 7 p.m. Having started later than usual the regular meeting proceeded at a rapid pace. All agenda items were dealt with quickly. When the time came for staff and commissioners comments Director Henderson announced the upcoming junk drop off days of March 2 and 16. Commissioner Durham in his comments urged all citizens to take advantage of the junk drop off days He reminded everyone that it is a service to the community and helps make Douglas a more beautiful city when we dispose of old couches and mattresses and other such items. He reiterated that there is no charge to the public.

After some discussion of Black History Month by the board members the meeting was adjourned.