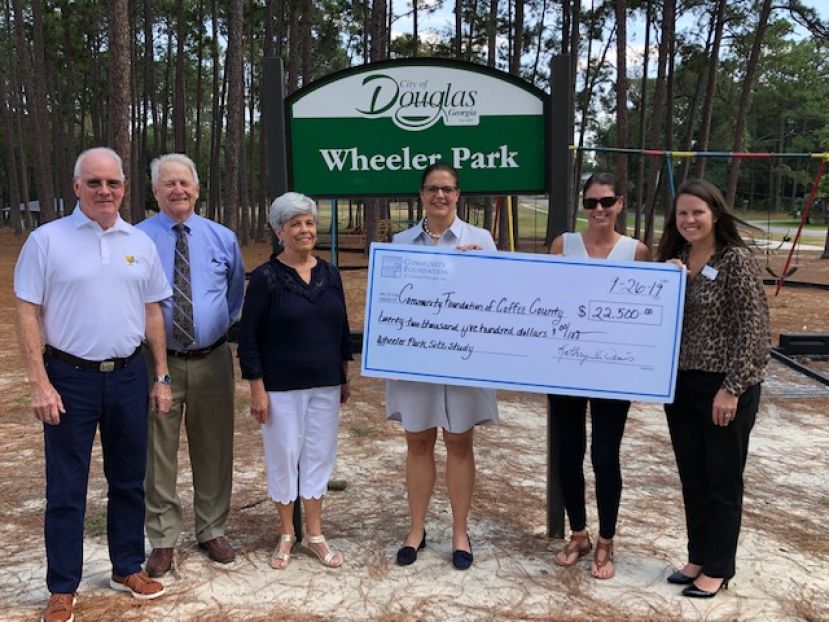 The Foundation teamed up Interface Studio LLC in May 2019 in order to establish a new, community-based vision for Wheeler Park, which included research and analysis, community outreach and a conception park design. Together, CFCC and Interface Studio learned from local residents how the park currently met their needs, how it didn’t, and what they would like to see in the park in the coming years, whether it be physical improvements or new park programs to activate the park and bring the community together. Based on the community’s input and discussion during the public meeting, Interface Studio tailored a vision plan to provide a blueprint for the transformation of Wheeler Park.

The Board of Directors of the Community Foundation of Coffee County approved the plan on July 10, 2019, and The City of Douglas and The Coffee County Commission approved it shortly thereafter.

The project includes several different phases, some of which will begin immediately. The entire project, however, will take many years to complete. Several ancillary steps must be completed before work can begin, the first of which is to build a Friends of Wheeler Park group to provide further input and a network of volunteers to help as work begins. The project is a complete makeover that will transform Wheeler Park into a centerpiece for the entire city.

Everyone wants to know exactly what the park will look like once the work is completed. The plans include revamping the playground and adding a splash park. The ball field, which a key feature of the current park, will be replaced with an amphitheater. Another well-known component of Wheeler Park is the creek that runs through the center of the park. The Foundation plans to restore the creek to a viable waterway and scenic focal point of the park as well. Other plans include widening the sidewalks and incorporating fitness stations, formalize and beautify the park gateways and entrances, makeover the pavilion, diversify the tree canopy, and connect the park to the Douglas Greenway Trail, which is located about two blocks east of Wheeler Park.