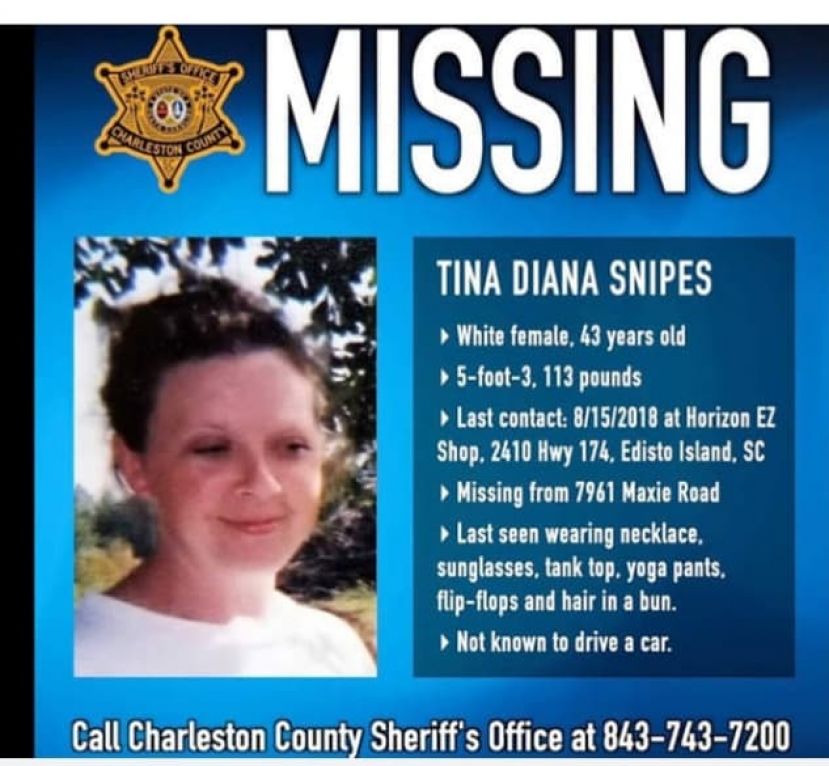 Two years ago, Tina Snipes, 43, disappeared on Edisto Island, South Carolina. Authorities have ruled her disappearance a murder; however, they have little information regarding exactly what happened to Snipes. The case remains a mystery and Snipes’s family, some of whom are located in Coffee County, want answers.

Snipes disappeared on Aug. 15, 2018 after leaving a convenience store on Edisto Island. Someone gave her a ride from the store and she hasn’t been seen since. According to a story that appeared last month on live5news.com, authorities found some of Snipes’s belongings not far from her home. Based on what they found, officers determined that Snipes’s had been killed.

Lisa Lott, who is from Coffee County, has refused to let her sister be forgotten. She spoke to live5news.com on Aug. 20 of this year, just over two years after Tina went missing. “You can’t explain what it does to a person to sit each and every day for two years, wondering what happened to your loved one and you get no answers,” Lott stated to Live5 News. “How does a person actually fall off the face of the earth with no answers as to what happened?”

Lott added that the last two years have been “torture” on her family. She knows someone, somewhere has information regarding Tina’s death and she’s pleading for whoever that is to come forward. “I just wish we could get answers that someone would care enough about a human being that’s missing for years, and her family is going through torture, wondering where she’s at,” she stated to Live5news.

Anyone with information on the Snipes case should contact your local law enforcement agency or the Charleston County, South Carolina sheriff’s office at (843) 202-1700.