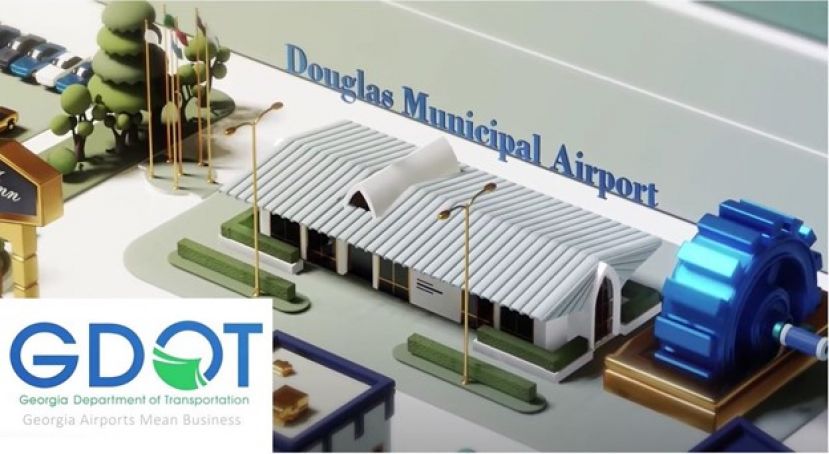 The Georgia Department of Transportation Aviation Services conducted a Georgia Statewide Airport Economic Impact Study in 2019 and recently released a video entitled Georgia Airports Mean Business. Douglas Municipal Gene Chambers Airport is featured as one of the 103 local airports, which contribute $73.7 billion in annual economic benefit to the state and support 450,500 jobs with a total annual payroll estimated at $20 billion.

Douglas airport has come a long way since starting as an aviation school in 1928.  Douglas Municipal Airport has a total economic impact of $11,053,000.  The study shows the airport saw 10,804 visitors, supported 102 jobs totaling an annual payroll of $3,908,000.  Benefits contributed to the community by the airport include emergency services, aerial applications, business use, and medical/healthcare.

“We are so happy that the Douglas Municipal Airport was showcased in the video”, says Mayor Tony Paulk. “As this video demonstrates, we are very fortunate to have our local airport and honored by the statewide recognition for the vital role it contributes to the economy of Douglas and Coffee County.  Because of our airport, we can recruit industries, doctors, and other business professionals to our community.  Not just locally, but the impact of our airport is experienced by surrounding communities and even on a state level.”

According to the Georgia Department of Transportation Aviation Services, the video reflects the year-long effort to investigate, study, and document the economic impact of commercial and general aviation airports in Georgia. Information in the video is intended to help the public understand the importance of each local airport and the role it plays in supporting the economy of the state.  Georgia has an extensive system of commercial and general aviation airports to meet the needs of commerce and business across the state. These airports are essential to the state’s transportation and economic infrastructure and support the aerospace technology, manufacturing, distribution, agriculture, and tourism industries.

For the full video release, https://www.cityofdouglas.com/airport.