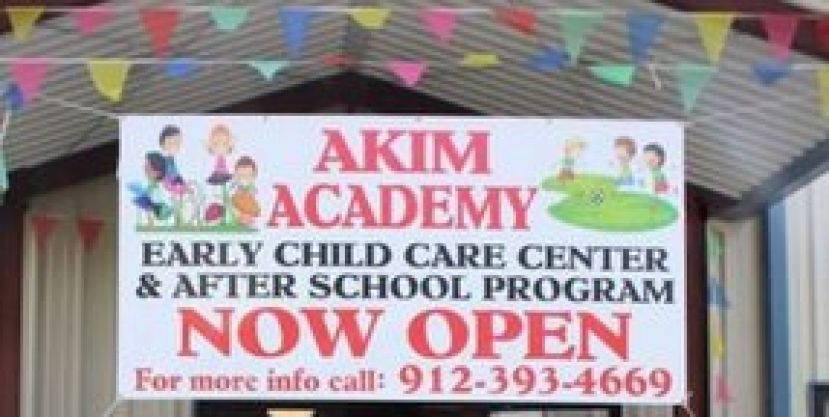 DouglasNow.com file photo Akim Academy has been closed after an infant died in a choking incident that allegedly occurred at the center. This is a photo of Akim's banner announcing its grand opening in 2017.

A local daycare center that opened in 2017 has been ordered closed for up to three weeks after a nine-month-old infant died following an alleged choking incident at the facility.

According to documents obtained by DouglasNow.com, Bright from the Start, the division of the Georgia Department of Early Care and Learning that licenses childcare facilities in the state, has closed Akim Academy, located on 441 South in Douglas, after the agency learned of the death of an infant. The documents that the infant died on May 3, 2021; however, Akim Academy did not report the death until May 6, 2021.

The documents contain a fairly detailed account of what happened. The documents state that the child arrived at the center about 9 a.m. on May 3, 2021, and was healthy. About 10 a.m., the child engaged in an activity that involved a sensory bowl that contained several objects, including dried pinto beans. After a short time, the infant picked up a handful of beans and stuck them in the infant’s mouth. An employee got the beans out of the child’s mouth and checked to make sure all the beans were out. However, the child had apparently swallowed a single bean and it had become lodged in the infant’s throat.

For the next several hours, the child exhibited periods of labored breathing and discomfort. Several hours later, at 2:51 p.m., the documents state, the child’s mother, who had been called, arrived at the center. Staff had called EMS to transport the child to Coffee Regional Medical Center. According to the report, Akim staff did not inform EMS about the incident involving the pinto beans.

At CRMC, medical personnel took x-rays to determine if the child’s airway was blocked. The x-rays were inconclusive. Shortly thereafter, the child suffered a heart attack. Documents state that the child had to be “intubated and stabilized” and then transported by helicopter to Savannah. By this time it was 7:47 p.m., nearly 10 hours after the initial incident. The mother drove to Savannah and was informed while she was en route that doctors had found a peanut-shaped object in the child’s throat. She agreed to surgery to remove the object. During surgery, however, the child passed away.

The documents allege several mistakes were made during the incident, not the least of which is the “director told the teacher and staff not to mention the incident with the beans.” This, the report alleges, deprived medical personnel with vital information that could have saved the infant’s life.

The report also cites eight violations, among them Supervision, Equipment and Toys, Inspections and Investigations, Children’s Health, and Activities for Children Under Three, among others.

Bright from the Start closed Akim Academy on May 14, 2021. Other agencies, including the Coffee County Sheriff’s Office, are investigating this incident. None have issued a statement. The investigation is ongoing. Akim could reopen within 21 days or, depending on the outcome of the investigation, could remain closed. In a since-deleted Facebook post, the center’s owner stated she was considering closing Akim permanently.