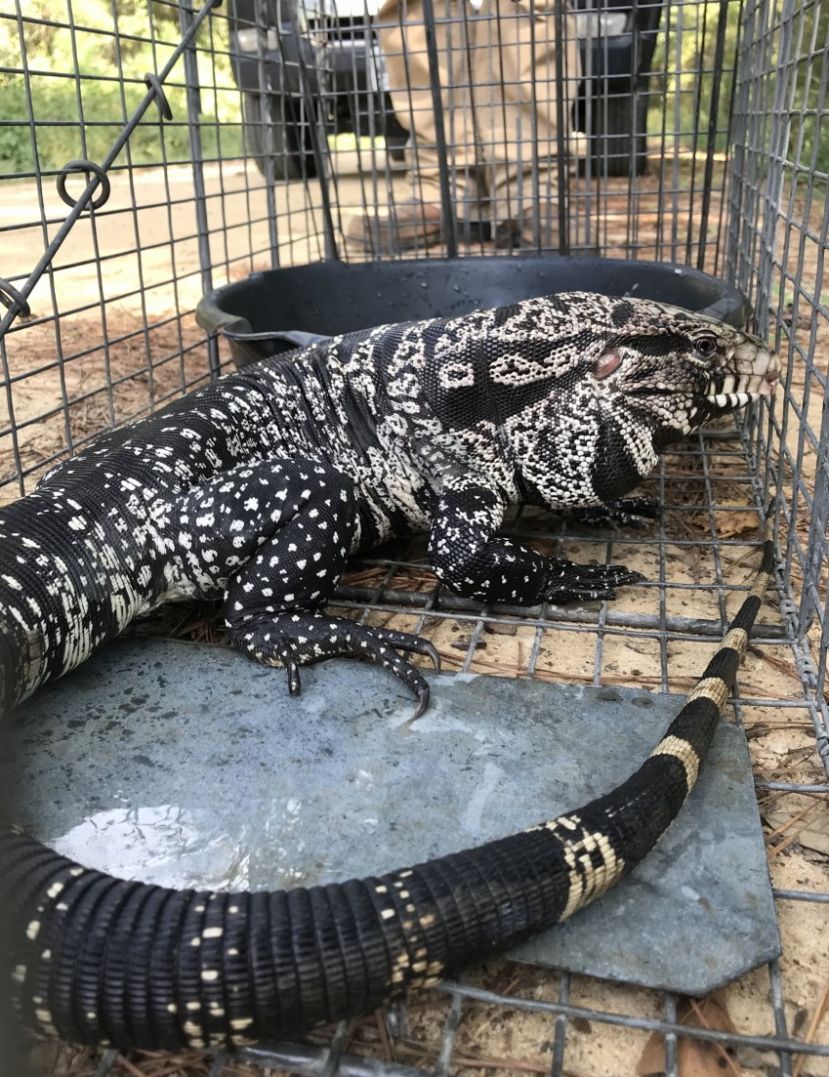 University of Georgia Cooperative Extension is assisting the Georgia Department of Natural Resources (GDNR) in the effort to find and remove tegus from the wild in southeast Georgia, and the public’s help remains critical to keeping these big, South American lizards from getting a toehold in the state.

Since 2018, GDNR, Georgia Southern University and the U.S. Geological Survey have been working to assess and remove what is considered a wild population of Argentine black and white tegus in Tattnall and Toombs counties.

This species, the largest of all tegus, can reach 4 feet long and weigh 10 pounds or more. Adaptable and hungry, Argentine black and white tegus are a significant threat to native wildlife, from gopher tortoises to ground-nesting birds such as bobwhite quail, wild turkeys and whip-poor-wills.

Lance McBrayer, a Georgia Southern professor coordinating the project, said that while trapping will continue at key sites this spring and summer, arrangements of game cameras will also be rotated every few weeks to as many new places as possible. The goal is twofold, McBrayer explained.

“We’re trying to establish if we can reliably detect tegus with this method and also see if the tegus have moved farther away from the main area we’re trapping.”

If a tegu is spotted, traps will be set to try and catch it. The key, McBrayer added, is the involvement of Tattnall and Toombs-area residents. He’s looking for owners of at least 5 acres of likely tegu habitat who are willing to allow the Georgia Southern crew to temporarily set game cameras on their property.

The need for public involvement to help eradicate these invasive lizards is not new, said Derrick Bowen, Agriculture and Natural Resources agent for UGA Cooperative Extension in Tattnall County.

“We have done our due diligence in spreading the word about the Argentine black and white tegus to the public. This trapping project is an ambitious, proactive response to control this invasive species and the Tattnall County Extension office is here to support and provide any assistance along the way,” Bowen said.

Residents have responded to the call to report sightings of tegus in the wild, dead or alive. Of the seven tegus collected last year in Tattnall and Toombs counties, the public found or killed three. The seventh was a large tegu detected by a game camera on a Tattnall County farm and later trapped.

While it’s not known where the tegus in Toombs and Tattnall came from — tegus are popular as pets — it’s clear they spell trouble in the wild. Daniel Sollenberger, a senior wildlife biologist with DNR’s Wildlife Conservation Section, said tegus are generalists in habitat, diet and the temperatures they can survive.

“They can live almost anywhere and eat almost anything,” Sollenberger said.

The problem is not only their appetite, which favors eggs — including those of protected species such as American alligators — but can vary from pet food and plants to fruits, vegetables and small animals. There is also concern tegus could spread exotic parasites to other wildlife and cause bacterial contamination of crops. Research also shows that these reptiles, like most, carry salmonella.

Once tegus are established, eradication is almost impossible. Florida has three confirmed populations in the wild. Trapping at one site along Everglades National Park can yield hundreds of tegus per season.

What can you do?