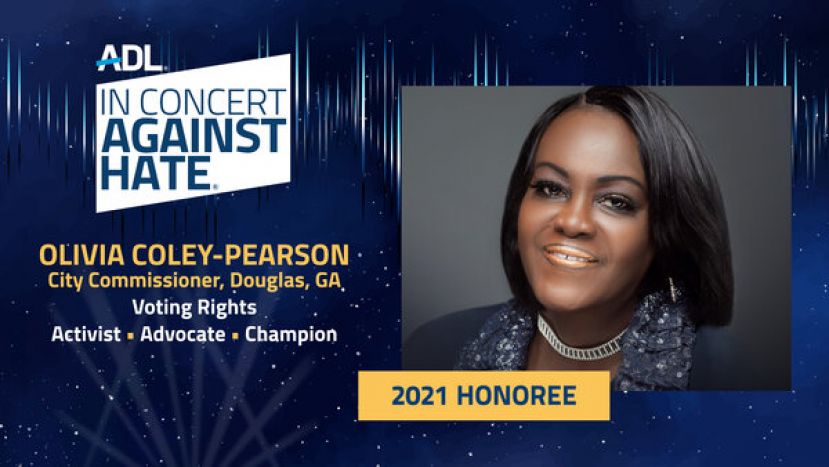 Douglas City Commissioner Olivia Pearson is one of six individuals The Anti-Defamation League will recognize for their extraordinary courage and compassion when confronted with bigotry and hate as part of the 27th annual ADL In Concert Against Hate.

Commissioner Pearson is the only Georgia resident to receive this recognition and will be presented with the ADL Kay Family Award. Here is here bio according to the ADL press release: Olivia Coley-Pearson of Douglas, a small town in Coffee County, GA, has for decades led the fight there for voter rights. She was criminally charged with voter fraud in 2012 for legally helping one Black voter cast a ballot, brought to trial for that in 2016, and charged again in the 2020 elections. Pearson has seen meaningful growth in voter registration and turnout, and her goal is to inspire the Douglas's Black residents and to provide voters with ways to right racial wrongs.

The other honorees are Rabbi Philip and Ruth Lazowski, Holocaust survivors; Jessica Owyoung; co-founder of Compassion in Oakland; and Julia Jassey and Isaac De Castro, co-founders of Jewish on Campus.

The free virtual event, taking place at 8:00 PM ET on Sunday, December 12, will be hosted by Karamo Brown and feature performances from an all-star lineup of musicians and performers including Josh Groban, Gloria Estefan, Joshua Bell, The American Pops Orchestra and members of the National Symphony Orchestra as well as appearances by Judith Light, Jason Alexander and Norm Lewis.

"While at times the fight against hate can seem overwhelming, it's inspiring to learn about incredible individuals who have taken on these challenges in their communities," said ADL CEO Jonathan Greenblatt. "These courageous individuals have demonstrated that even in difficult times, there is immense opportunity for progress, dialogue and greater understanding. We are honored to share their stories and encourage others to fight hate for good."

Actors, musicians, civil rights leaders, policymakers, and friends of ADL will join the free event to celebrate this year's honorees, each of whom has stood up to hate, injustice, and bias so that others will not have to experience the same.

The first ADL In Concert Against Hate was held in 1995 as a special event to commemorate the 50th anniversary of the end of the Holocaust. The concert honored the memory of four individuals who are recognized as "Righteous Among the Nations" – non-Jews who rescued Jews from the Nazis. Response to the concert was so overwhelming that what was intended as a one-time celebration was transformed into an annual tradition, which brings thousands together to be inspired by the stories of real heroes and to stand up against all forms of bigotry, injustice and extremism.

The ADL is a leading anti-hate organization. Founded in 1913 in response to an escalating climate of anti-Semitism and bigotry, its timeless mission is to protect the Jewish people and to secure justice and fair treatment to all. Today, ADL continues to fight all forms of hate with the same vigor and passion. ADL is the first call when acts of anti-Semitism occur. A global leader in exposing extremism, delivering anti-bias education and fighting hate online, ADL's ultimate goal is a world in which no group or individual suffers from bias, discrimination or hate. More at www.adl.org.