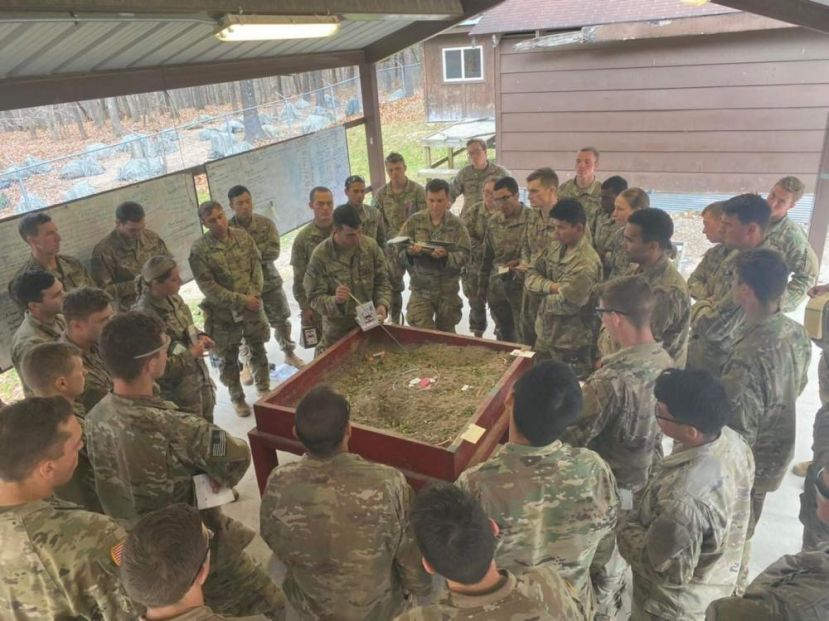 U.S. Army Capt. Trevor Holbrooks graduated first in his class at the U.S. Army’s Sapper Leader Course Nov. 24, 2021, at Fort Leonard Wood, Missouri. By graduating first in class through his pursuit of the coveted Sapper tab, the course instructors recognized Holbrooks as a distinguished graduate.

The Sapper Leader Course is regarded as one of the toughest schools in the Army and graduates earn the right to wear the Sapper tab.

“Physically and academically, it (Sapper Leader Course) was difficult but doable,” said Holbrooks. “It is definitely doable if you put in the work ahead of time.”

Holbrooks’ class started with 64 students when the courses began on Oct. 29, 2021. Only 21 Sappers completed the course, a graduation rate of only 32.8% for Holbrooks’ cohort.

Holbrooks’ success at Sapper Leader Course is a result of his past training and experience.

Holbrooks commissioned from the University of North Georgia in 2016 where he was a distinguished military graduate. While attending UNG, he served in the Georgia Army National Guard as a cannon crewmember assigned to Charlie Battery, 1st Battalion, 214th Field Artillery Regiment, 648th Maneuver Enhancement Brigade.

Holbrooks is currently the company commander of the Douglas-based Bravo Company, 177th BEB, 48th IBCT. He resides in Statesboro, Georgia.

The Statesboro-based 177th BEB is the 48th IBCT’s organic engineer battalion that supports the brigade with several enabling assets for offensive, defensive, stability and defense support of civil authority operations. The battalion contains two engineer companies each with Sapper platoons.

A Sapper is a combat engineer trained in conducting military engineering under combat conditions. Sapper capabilities include breaching fortifications, clearing and laying minefields, demolitions, and construction and repair of roads, bridges, airfields and other key infrastructure in a deployed theatre.

By earning his Sapper tab and graduating first in his class, Holbrooks demonstrated leadership through example. He returns to Bravo Company not only with advanced skills taught at Sapper Leader Course, but also the presence to motivate and lead combat engineers under his command.

“One of the main driving factors of me going to Sapper school was to make it more attainable in the Soldier’s eye,” said Holbrooks. “I wanted to give Soldiers someone that they knew in their formation that they can talk to, that had been there and done it, and make it a little more feasible for them.”

Holbrooks and the 177th BEB’s training will be put to the test in June 2022 when the 48th IBCT will participate in an eXportable Combat Training Capability rotation at Fort Stewart, Georgia. The 48th IBCT completed a XCTC rotation in 2017 which Holbrooks also participated.

With skilled and experienced leaders in the brigade, like Holbrooks, the 48th IBCT is postured to accomplish any assigned training rotation, deployment and mission.

“It (XCTC 2017) brought a lot of positive operational procedures to the unit as well as helped us build SOPs (standard operating procedures),” said Holbrooks. “We still see some of those SOPs still around in the unit today.”