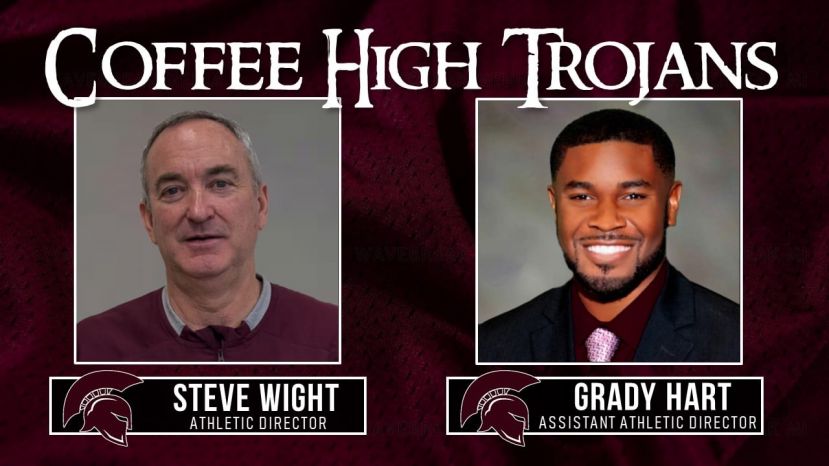 Steve Wight earned a Bachelor of Education in Health and Physical Education from the University of Georgia in 1982 and a Master of Education in Health and Physical Education from Valdosta State University in 1991. Coach Wight has been a part of Coffee High Athletics for 40 years, joining the staff in the fall of 1982. Over the years he has served in a number of roles, including Health and Physical Education Teacher (1982-2014), Health and Physical Education Department Chair (1985-2011), Head Varsity Baseball Coach (1985-2000), Assistant Varsity Football Coach (1982-2015), Offensive Coordinator (1987-1993, 1998-2001, 2007-2009) and Assistant Athletic Director (2001-2022). As Head Varsity Baseball Coach, he was named Region Coach of the Year five times (1986, 1987, 1991, 1992, 1994), GACA/Georgia Dugout Club All-Star Coach twice, and led the Trojans to a state championship appearance in 1992. Coach Wight has also served as the 1-AAAAA Region Secretary since 2020 and the GHSA Semifinal Football Crew Chief since 2018. He and his wife of 38 years, Dawn, are members of the First United Methodist Church of Douglas.

Grady Hart is a native of Vidalia, Georgia and is a 2009 graduate of Vidalia High School. He earned a Bachelor’s of Science in Kinesiology from Albany State University in 2013 and a Master of Science in Kinesiology from Georgia Southern University in 2015. He earned his degree in Educational Leadership from the University of West Georgia in 2020. Mr. Hart began his career in Education in the fall of 2013 teaching Middle Grades Math and Health and Physical Education at J.R. Trippe Middle School in Vidalia. He was also the Head Boys Basketball, Head Track, and Head Football Coach at J.R. Trippe Middle School for seven years. During that time, Mr. Hart also was the Head Girls Track and Field Coach at Vidalia High School where he coached a total of nine individual State Champions and led the girls to the first team State Championship in VHS history in 2018. Hart first joined the Coffee County School System during the 2020-2021 school year as 7th Grade Assistant Principal at Coffee Middle School. He is currently the Assistant Principal and Director of Track and Field at Toombs County High School, and will be returning to Coffee County as Assistant Principal and Assistant Athletic Director at Coffee High School for the 2022-2023 school year. Mr. Hart is married to the former Shannon King and they have three children: Grady III, Imani, and Levi. Mr. Hart is very excited about returning to the Coffee County School System.