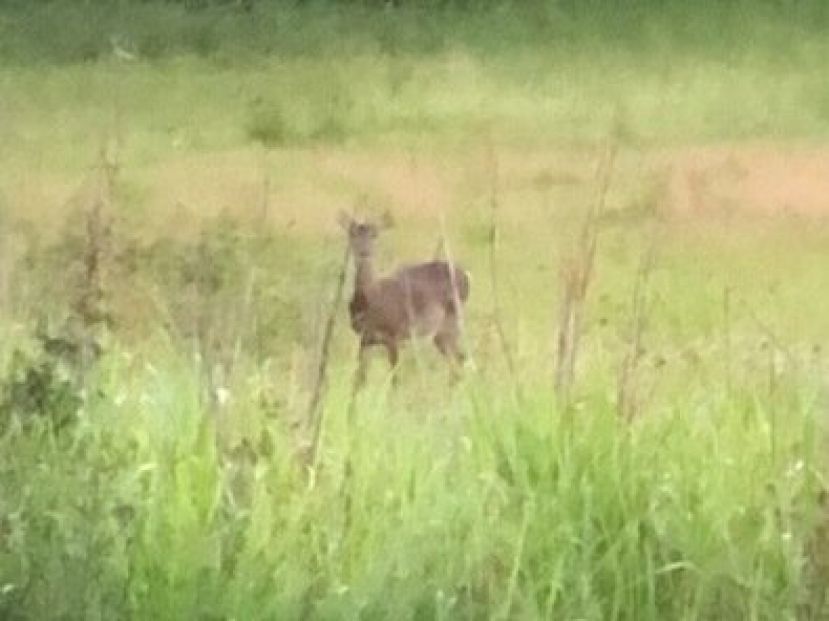 Robert Preston Jr./DouglasNow.com A deer stands in the vacant lot at the corner of North Chester Avenue and North Peterson Avenue.

Several years ago, the Douglas city commission passed a local ordinance deeming the city a wildlife sanctuary. According to paragraph C of Section 10-4 of the ordinance, “It shall be unlawful to trap, hunt, molest or kill any other wild game in the city except by order of the city manager.”

It’s time for such an order.

In the past, people — myself included — have hunted deer inside the city limits. Douglas still has a number of wooded areas that house a large deer population.

It’s not uncommon to see trophy class bucks wandering the railroad tracks, standing in the vacant lot behind the mental health building on South Shirley Avenue, or crossing North Chester near the shop pond. But for every big buck inside the city, there are hundreds of does and yearlings that explore sidewalks, backyards, and dart out in front of vehicles. The carcasses of dead deer can be seen throughout the city — from close to downtown to neighborhoods far and wide.

This fall, two deer have broken through windows and damaged the interiors of local businesses. One such incident occurred over the weekend when a deer crashed through the window of Cheer Leads Elite, located on the west side of town across the bypass from Amerson Tire. A few weeks ago, another deer broke through a window of Georgia Skin Company on East Ashley Street — in the heart of downtown. A couple of years ago, a small buck was hit by a car on South Madison near McDonald’s. The deer limped into the Ollie’s parking lot where a veterinarian humanely put it down.

These are but three of dozens, if not hundreds, of incidents that happen in the city every year. Most of the human-deer interactions are, of course, deer v. car collisions. Such accidents pose a threat to the deer and people alike and cause hundreds of thousands of dollars in damages.

There is a solution. Allow deer hunting in the city.

The city should grant permits to hunt within the city limits. Those permits would generate revenue for the city. Hunting could also protect some areas of town from development. While we all love progress, we also know that green spaces are also attractive. Hunting has always resulted in conservation — both in terms of protecting hunting lands and the animals themselves.

While conservation is a part of the equation, the most pressing issue is controlling the deer population in the city. Quite simply, there are too many deer. They are fun to see but their presence causes problems.

The local ordinance protecting wildlife may have done too good of a job. Crashing through windows and getting hit by cars isn’t good for business owners, drivers, or the deer.

Here is what I propose:

1. Allow bowhunting inside the city limits, even if it’s a limited season.

2. Require a permit that the hunter must purchase at City Hall in addition to a valid Georgia hunting license. I have no problem with prospective hunters presenting a document declaring where they plan to hunt along with permission from the landowner if the hunter doesn’t own the tract he or she plans to hunt.

3. Abide by all the applicable wildlife laws of the state.

4. Enact these changes to the ordinance immediately if possible.

I reached out to City Manager Charlie Davis for comment Monday morning but he was out of the office. However, other city officials say there has been no such conversation regarding this issue.

There are a few particulars that need to be worked out — and can be done so quite easily — but I’d like to see the city explore this issue further. If enacted responsibly, deer hunting in the city could solve several issues for businesses, motorists, and sportsmen alike.

More in this category: « New Pilgrim's Pride plant will bring jobs, opportunity -- but not everyone is happy
Login to post comments