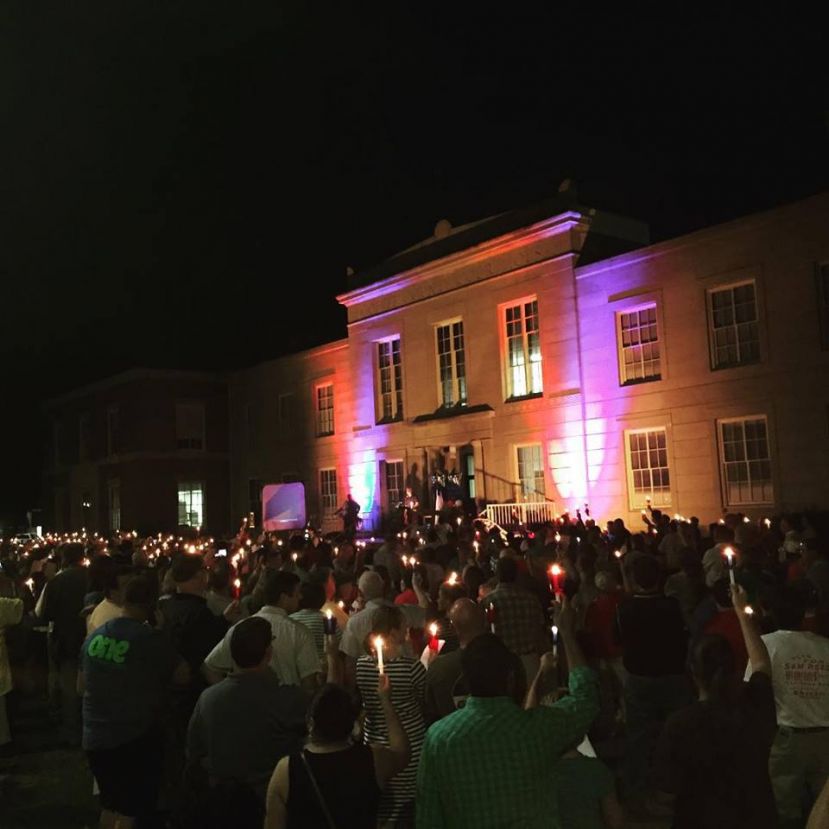 Photo courtesy of Nathan Lingenfelter Organizers of Monday night's prayer vigil ordered 1,500 candles; they ran out before the prayer vigil started. The event was a powerful display of Christian brotherhood and concern.

Last night, I stood in a crowd of 1,000 or more people. There was a prayer being said from the podium on the steps of the Coffee County Courthouse. I was supposed to have my eyes closed and my head bowed. Instead, I was looking around in amazement, completely taken aback – in a good way – at what I saw.

For the first time I can remember, members of churches throughout Coffee County gathered on the courthouse square for a candlelight prayer vigil. The event, which lasted over 90 minutes, was a cry to God from Christians concerned about the direction of the United States. The order of service included songs and prayers for unbelievers; biblical marriage; leaders at the city, county, state, and national level; and Scripture readings.

Throughout the Bible, there is a theme of unity, that all people are united through God’s love. The love of God extends to all, and the Creator of the universe desperately desires to have a relationship with each individual on Earth. For believers, Christ holds all with an unbreakable bond, one that shatters denominational, doctrinal, racial, and social differences. Every Christian acknowledges this but few congregations put it into practice. Churches are one of the last bastions of open segregation. And while this segregation is by choice and perpetuated from within, it is segregation nonetheless.

Monday night, however, there was no segregation. There was no division. There was no quarreling over gifts of the Spirit, baptism of the Holy Spirit, contemporary v. traditional music, length of service. There were simply Christians gathered together, with humbleness of heart and concern for community, crying out to God to have mercy this great country.

The speakers prayed with an urgency seldom heard from Sunday morning pulpits. Things are changing in the United States. Once a nation governed by leaders who respected matters of God and faith, that tide has turned and ours is a country growing increasingly hostile to the Christian faith. Christianity is viewed as divisive, backwards, discriminatory, outdated, and, in some instances, even evil. The attitude and tone of the messages from the podium reflected the desperation many Christians feel in these uncertain times.

What many people fail to realize is how the Christian faith can galvanize a community, a state, and a nation. Dr. Martin Luther King Jr. demonstrated how powerful unity in Christ is when he, through the biblical concept that all men are created equally before God, initiated one of the greatest periods of social change the United States has ever seen. We now live in a time with more questions than answers, and leaders seem more intent on using our differences to divide and distract. It was Christ Himself who, in Mark 3:24-25, said “If a kingdom is divided against itself, that kingdom cannot stand. If a house is divided against itself, that house will not be able to stand.” There is weakness in division, strength in unity. And no greater unity exists than faith in Christ.

Monday night, citizens throughout Coffee County embraced that unity. For the first time since the Send the Rain event that took place in October of 2008, local believers were one body, one faith, one baptism. There is power in that kind of unity, power that changes hearts, changes lives, changes communities. And that is what each of the 700 individuals gathered Monday night were praying for.

More in this category: « Satilla Library representatives thank local businesses and organizations for their support this Summer Politics and conservative evangelical leaders »
Login to post comments