Racism is a real, undeniable presence globally and in our local community. We see it played out every day through social media, news stories, and our own personal relationships. While most of us would profess that we seek peace, unity, cooperation, and love that knows no color, the tensions continue to persist and, despite our best efforts and good intentions, only seem to get worse.

I penned a story earlier this week about Mr. Bobby Worthy, a civil rights activist who was involved recently in a physical altercation at a Douglas restaurant that ultimately led to the arrest of Larry Charles Nesmith, Jr., a Douglas resident and former candidate for the Georgia House of Representatives. The article centered on Mr. Worthy's involvement with the Justice League United, a political organization he leads, and some of his personal history. I won't rehash the details, but you can view the article in its entirety here.

Mr. Worthy snapped back by posting a photograph of me, along with some pretty unflattering, harsh remarks and accusations to his personal Facebook page. I have included an image of his post at the conclusion of this article.

While I obviously don't agree with Mr. Worthy's assumptions and statements about me, I don't feel the need or desire to defend myself today.

There was a time when I would feed into the hate, anger, and aggression that drives so many people nowadays, but something is different with me and I believe that same thing is the answer to the issue of racism.

Racial reconciliation will only be accomplished through the Great Reconciler, Jesus Christ.

After I was made aware this morning of Mr. Worthy's post, I found myself not being bitter, resentful, or hateful, but praying for him; honestly, with the purest of intent, praying that God would shower Mr. Worthy with His unfathomable, undeniable love and grace and lead him to the salvation and peace He has brought me. 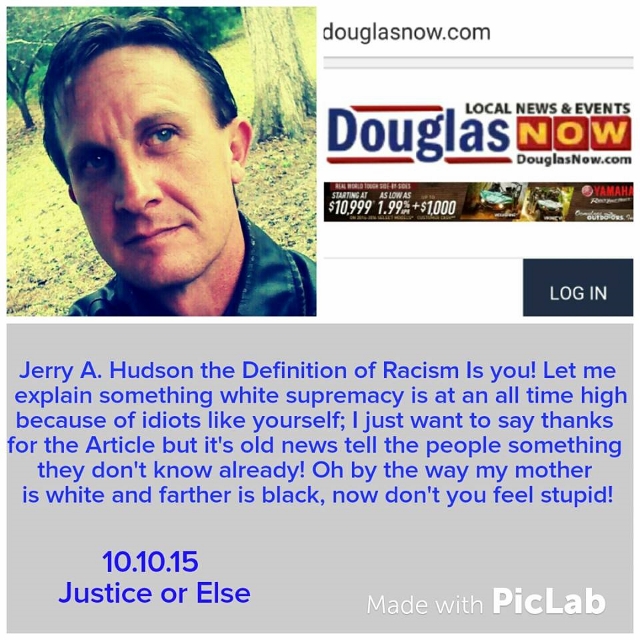 More in this category: « Assistant district attorney responds to recent media controversy, allegations The Force Awakens: Flawed but a worthy addition to the Star Wars mythology »
Login to post comments