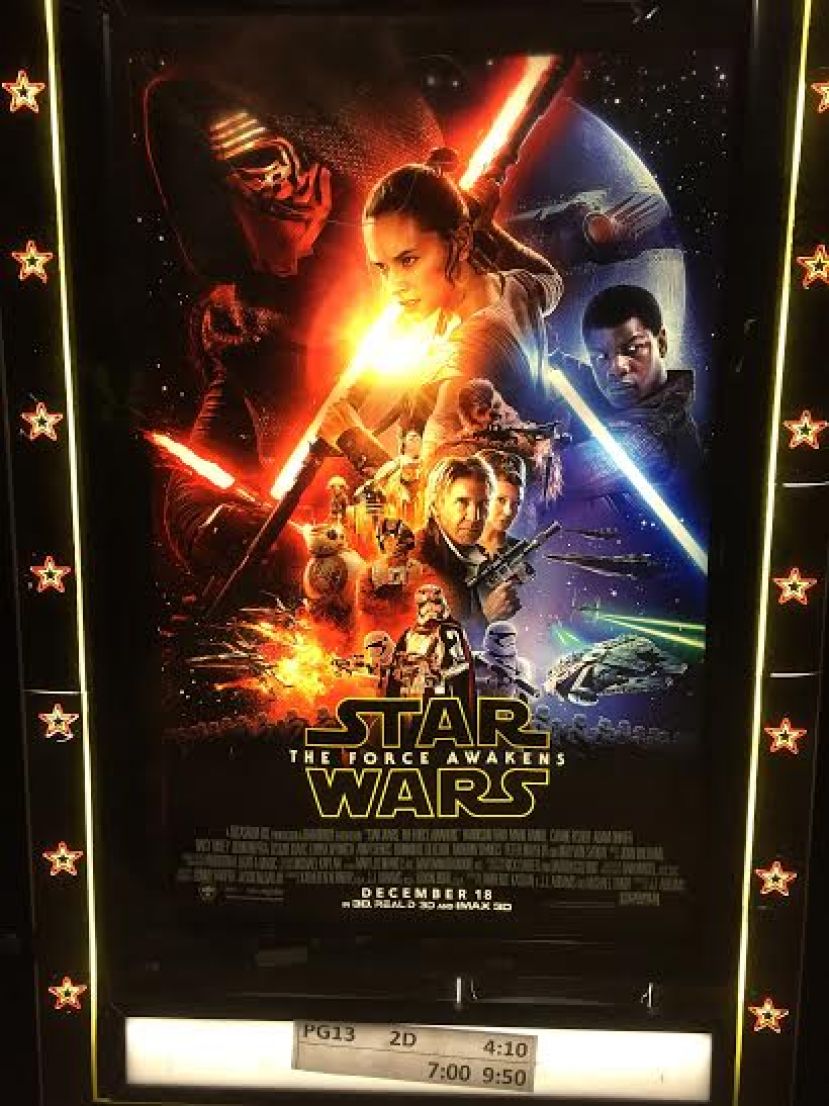 Robert Preston, Jr./DouglasNow.com The Force Awakens's poster as displayed at the Rockin' 8 Cinemas

This weekend, I watched Star Wars: The Force Awakens. I found it to be a worthy addition to the Star Wars canon. While it re-introduced us to most of the original cast and righted the wrongs of the prequels, Episode VII is not without its problems. Before we dive into the new film, let me give you a little background.

The Star Wars mythology is a mixed bag for me. On the one hand, George Lucas created what may be the single most important story/universe/mythology/pop culture phenomenon in cinema history. Every single aspect of Star Wars has reached iconic status: The Jedi, the Death Star, Darth Vader, the Force, the Millennium Falcon, just about every character that has appeared in any semi-major role onscreen. Everyone knows exactly what “A long time ago, in a galaxy far, far away . . .” means. The musical score is as universal as the films themselves; in fact, John Williams’s score is much of a character as any person, droid, or alien found in the films.

At the same time, the movies themselves – including the original trilogy – are not without significant problems that have almost caused me to turn my back on the franchise. Almost.

Episode IV contains one of the creepiest scenes in cinema to me – the kiss (albeit a short one) between Luke and Leia, who are of course brother and sister. The pacing, acting, and dialog are at times subpar. And why didn’t Obi Wan recognize C3PO and R2D2? They were all together at length during the prequels. Given C3PO’s propensity to say the wrong thing at the wrong time, there’s no way he could have held his excitement at being reunited with Obi Wan.

In Episode V, largely considered to be the greatest of the Star Wars films, there is a major continuity problem that no one has explained to my satisfaction. Luke leaves for Dagobah at the same time Leia, Han, and Chewbacca head to the Cloud City. Luke trains with Yoda for a time but leaves to find Leia and the others. The journey to the Cloud City and the events that follow seem to take a matter of days while Luke’s training had to have taken much longer – months, if not years. Yet he arrives at the Cloud City a short period of time after the rest of the gang. The timeline doesn’t add up.

Episode VI isn’t that bad but the plot is weak. It’s basically a re-hash of Episode IV -- more time on a desert planet, another Death Star, another Darth Vader lightsaber battle. Then there are the Ewoks. They are cute, and at times ferocious, but there’s no way that oversized raccoons could defeat a professional army equipped with the best weapons available in the galaxy.

As for the prequels, the biggest problem I have with them is the continuity issues. Yes, Anakin Skywalker is whiney. Yes, some of the characters are bad. Yes, the dialog is once again dreadful. Yes, Anakin and Padme have absolutely no chemistry whatsoever. Those are indeed problems but the continuity is what bothers me. The weapons, the cities, the space ships/vehicles, even the fighting tactics are far superior in Episodes I-III than they are in IV-VI.

The obvious answer to all of these questions is that Lucas had no idea exactly how the universe he created would take shape when he made Episode IV. When he wrote Episode IV, he never planned on Vader being Luke’s father. Neither did he have Luke and Leia as twins, which is why they had the incestuous kiss on the Millennium Falcon. The prequels didn’t satisfactorily answer these dilemmas; instead, they created new ones themselves.

At one time, I counted the three original Star Wars films and the three Indiana Jones films as my favorites. That’s not the case anymore. I’m not sure that any of the Star Wars movies are in my top 10 list these days.

And yet I could not wait to see The Force Awakens. Like many, I eagerly anticipated the release of the seventh Star Wars film. I did not see how the movie could live up to any of the hype. Never before has a film been released with greater fanfare. While it may not be the best movie ever released, there was never any doubt at all that it would be the most profitable blockbuster of all time.

Thus far, the movie holds tremendous ratings at Rotten Tomatoes. The last time I looked, it held a 95 percent fresh rating. That’s phenomenal. My impression of the film is, believe it or not, overwhelmingly positive. My opinion mirrors much of what has already been written about the movie. The Force Awakens honors the original trilogy while staying away from the mistakes of the prequels. It introduces a new and able cast of characters to the canon while re-engaging the important characters from Episodes IV through VI. We have a new villain in Kylo Ren, who is not nearly as menacing as Darth Vader but, with one thrust of his lightsaber, he manages to do something that even Vader himself could not perpetrate. The dialog is solid, as is the film’s pacing. And Stormtroopers, who have the coolest uniforms of any onscreen characters ever filmed, are represented as brutal and menacing soldiers instead of the cowardly, poorly trained, head-butting buffoons of the original trilogy.

Still, Episode VII is not without its flaws. I have but one complaint about the movie, but it’s a big one. Be forewarned – minor spoilers will follow. I take issue with the plot. While it’s a nod to the first three movies, it’s basically a re-hash of Return of the Jedi, which itself was a re-hash of A New Hope. The story centers around getting a droid that contains a message to the good guys, who end up having to blow up a large, planet-like superstation with a weapon large enough to destroy a planet. The droid ends up on a desert planet before hitching a ride on the Millennium Falcon under fire before finally making it to the rebel headquarters. Sound familiar? It should; it’s basically the same plot as Episodes IV and VI, without the Ewoks, of course.

Was it laziness on J.J. Abrams’s part or was it done on purpose, an attempt to acknowledge the original trilogy while at the same time establish a new chapter in the Star Wars mythology? I suspect it was a little of both; however, I feel the plot was tired and repetitive, and I believe the screenwriting team cheated by sticking with the same formula.

Despite the problems I have with the film, it is a worthy addition to the Star Wars series. I think the next two films will head in a very different direction. That’s going to be important moving forward, and I’m excited to see what comes next. In my opinion, the Star Wars canon remains a complicated and convoluted series; it may be the single most influential film series ever released but it’s also a flawed, poorly executed, and at times feeble attempt to tell what could be an even more compelling story. That said, I really liked The Force Awakens.

I think I’ll go back to the theater and see it again.

More in this category: « The missing aspect of racial reconciliation City's press release a disservice to police officers »
Login to post comments