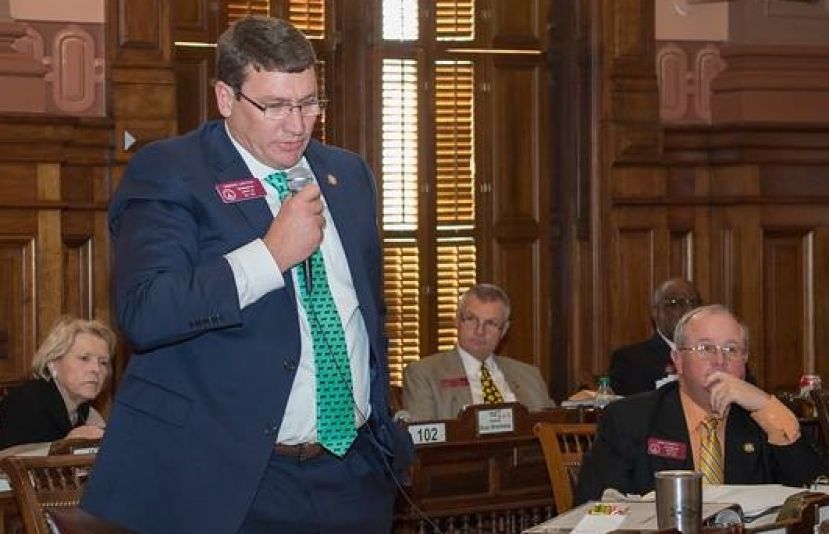 The House reconvened on Monday, February 22 to begin the seventh week of the 2016 legislative session. My colleagues and I had a busy and eventful week convening on the House floor every day as we worked to continue to pass important legislation in preparation for Crossover Day deadline. Now that we are more than half way through the legislative session, the days are longer; however, we are committed to passing meaningful legislation that will have a positive impact on the lives of all citizens of this great state.

Among the legislation passed out of the House this week, one of the most meaningful, life-saving measures was House Bill 965, “The Honorable Jimmy Carter Cancer Treatment Act.” This bill would provide patients who have been diagnosed with stage four metastatic cancer increased access to treatment. This bill would prohibit any health benefit plan issued in Georgia that directly or indirectly covers stage four advanced, metastatic cancer treatments from denying coverage for a drug approved by the United States Food and Drug Administration (USFDA) if a patient does not have a previous history of failing to respond to initial cancer treatment medications.

Many insurance companies require that patients show failure to primary drugs before insurance will cover additional treatments, but with HB 965, if a doctor recommends an advanced cancer treatment drug for a patient with stage four advanced, metastatic cancer, the patient would not be required to have taken and failed previous cancer drugs. In August of 2015, former President Jimmy Carter, a native Georgian, was diagnosed with stage four metastatic melanomas, but as a result of his advanced treatment and skilled physicians, he entered remission in December. This legislation would ensure that all Georgians with insurance covering cancer have access to the best available treatment and drugs as President Carter had to combat the advanced spread of this aggressive disease.

Granting our citizens this increased and accelerated access will lift an unnecessary burden, especially for those already in the treatment process, and I look forward to the positive outcomes this legislation will have on so many lives in our state.

This week, the House also unanimously passed House Bill 831, the “Protecting Guardsmen’s Employment Act,” to offer our employment assistance to our active duty military personnel. This bipartisan legislation would amend existing reemployment protections for armed forces reservists by providing employment protections to Georgia workers called into service by the national guard of a neighboring state. This legislation would ensure National Guardsmen reemployment in their civilian job that who are called into service by a state National Guard or reserves are guaranteed civilian reemployment after being called into active duty and will provide these men and women with peace of mind when they are called away from their jobs to serve our country.

These men and women voluntarily serve our country and put themselves in harm’s way to protect and defend our way of life, and enacting this legislation is one way we can offer protection to these dedicated individuals. What should be common sense is not always a foregone conclusion, and I was proud to stand with a united House to pass legislation to benefit our military personnel.

The Landon Dunson Act, House Bill 614, was another bipartisan bill passed in the House this week. The Landon Dunson Act would install video monitoring camera equipment as a safety measure in self-contained school classrooms that provide special education services. Participation from local schools would be voluntary and only with the consent of the parents of the children in the self-contained classroom, and access to the footage from the cameras would be strictly limited to school administrators for educational and safety monitoring purposes. The Department of Education would have final approval of the local schools that choose to opt-in to the program, but each individual school would be responsible for providing their own video monitoring equipment.

This legislation was originally introduced in response to concerns of alleged abuse in classrooms that provide special education services but would also serve as a valuable tool to evaluate educational environments in special needs classrooms. This legislation would not only help to further our special needs programs in Georgia, but it would provide our teachers and administrators with the additional resources to review their work and assure the safety of the students at the same time.

This week we also saw the passage of House Bill 768, also known as the Georgia Achieving a Better Life Experience (ABLE) Act, a bill that aims to ease financial strains on individuals with disabilities by allowing them to save private funds in tax-exempt accounts without becoming ineligible for Medicaid. An ABLE account is a tax-free savings account that can cover expenses such as medical care, education, community-based supports, employment training, assistive technology, housing and transportation.

The Georgia ABLE Program would be governed by a board of directors appointed by the Governor, and this board would oversee the operations of the ABLE Program, including criteria for the tax-free savings accounts and establishing insurance policies to protect the assets of the funds, and the Office of the State Treasurer would ensure the proper management of funds and bank accounts for the program. The Department of Community Health, the Department of Behavioral Health and Developmental Disabilities, the Department of Human Services, the Georgia Vocational Rehabilitation Agency, and the Department of Education will work with the board of directors to define qualified ABLE applicants and program material.

Georgia joins nine other state legislatures currently considering similar legislation, and 34 states have already enacted ABLE legislation. The tax-free savings accounts would allow our disabled Georgia citizens to conserve their earnings for when they need them most while providing access to the medical care needed. Every citizen has different needs, and allowing Georgians the financial freedom to plan for their future expenses is something I was proud to support.

Another bipartisan measure that received unanimous support this week was House Bill 962, which would create the position of Kinship Care Enforcement Administrator within the Department of Human Services. This new position would be appointed by the Commissioner of Human Services to monitor, facilitate, and ensure compliance with all federal and state laws related to any programs available to kinship caregivers or the children in their care. A kinship caregiver is any relative of a child, other than the child’s parents, that is raising the child, and according to statistics, anywhere from 100,000 to 300,000 children are in kinship care in Georgia.

To look at this issue, the House passed House Resolution 474 during the 2015 legislative session that created a study committee to investigate state’s kinship services, evaluate public and private resources, and begin a process for streamlining the services and support. During the study committee process, members visited cities across the state to gain a firm understanding of the issues facing these children and their caregivers, and the committee’s hard work resulted in HB 962. With this legislation, we would better be able to address the needs and provide adequate resources to the growing population of kinship caregivers in our state who play such a vital role in the lives of Georgia’s children.

We also took some time this week to recognize some distinguished Georgians in the House chamber. On Tuesday, February 23, we welcomed new University of Georgia head football coach Kirby Smart to the Georgia State Capitol. A native of Bainbridge, Georgia, Coach Smart went on to play football for four years at the University of Georgia. He recently coached at the University of Alabama, where he helped coach the Crimson Tide to four National Championships. Our state’s flagship university is fortunate to have his skill and competitive drive, and the young men who play for him will no doubt benefit from his guidance both on and off the field.

We were also honored this week to have Presidential candidate and current Ohio Governor John Kasich join us in the House chamber on Tuesday. In his message to my colleagues and I, he reminded us to uplift one another, because we are all Americans before we are Democrats and Republicans, and that the “people of our state, our community, and our country depend on us.” Our country is often so polarized that it is difficult to keep these ideals in perspective. Gov. Kasich’s simple words will serve as a reminder that, at the end of the day, we all have the best interest of our citizens at heart, and I am proud to serve with such a distinguished and compassionate group of public servants. The House has a standard open invitation policy for all Presidential candidates wishing to address the chamber, and it was exciting to have Gov. Kasich stop by this week.

Finally, the House of Representatives and the state of Georgia lost a true public servant this week. Our dear friend and State Representative Bob Bryant from Garden City passed away on Thursday. Bob was a loving husband, father, grandfather, veteran, and friend to all. He served his constituents with grace and humility as their voice under the Gold Dome for 12 years, and the positive impact he made on the House chamber and in his community will not soon be forgotten.

On Thursday morning, the House held a special series of morning orders to honor Bob’s life and his legacy, during which members were able to share their fond memories of this great man. House Speaker David Ralston perhaps said it best when he said, “he served the way he lived with a kind and gentle spirit. When he left us early today, he took part of the best that we have here.”

We are gearing up for another extremely busy week at the Georgia State Capitol next week.

On Monday, February 29, we are scheduled to complete the 30th legislative day, which is also known as “Crossover Day.” Crossover Day is the last date in which a piece of legislation must pass at least one of the General Assembly’s two chambers to be considered for final passage this legislative session. The House is expected to work long hours that day to ensure that key House bills see the passage they deserve to receive consideration this session.

With that being said, I hope you will contact me with any questions you may have about any of the legislation we will be considering in these final days of the 2016 legislative session. You may reach me at my Capitol office at (404) 656-0287 or by email at dominic.lariccia @ house.ga.gov.

As always, thank you for allowing me to serve on your behalf, it is truly an honor.

More in this category: « A mixture of conservative, liberal ideologies keeping Trump atop the Republican presidential field What happens if Hillary Clinton gets indicted? »
Login to post comments