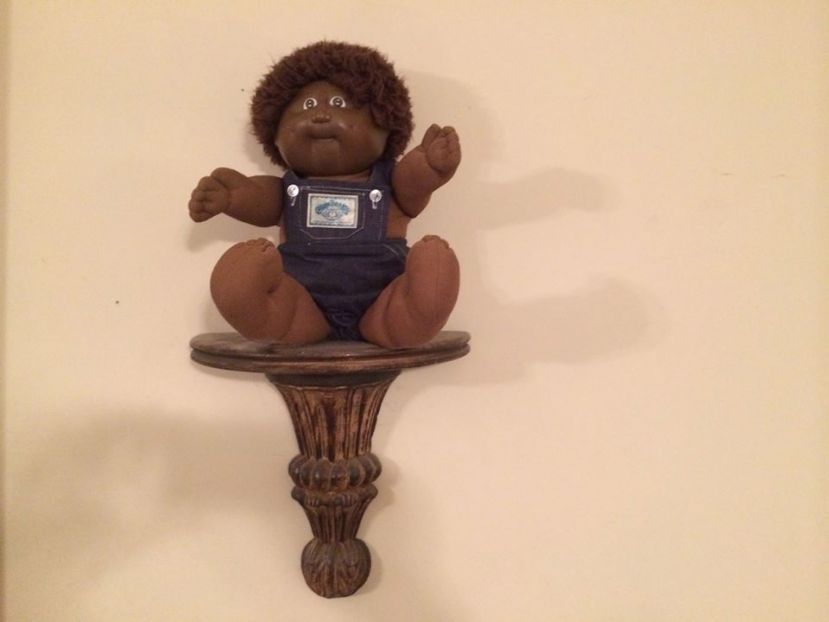 Robert Preston, Jr./DouglasNow.com This is Leroy, sitting atop his perch in my home several years ago. He now resides with my sister near Yulee, Florida.

I don’t know if the events that follow are true. My mother, who recently passed away from Alzheimer’s disease, maintained this is exactly what happened. Her story remained remarkably consistent over the years. Either it’s true or she was an excellent fib-teller. Either way, it’s a fantastic story.

Mom looked high and low for a Cabbage Patch Kid for Ashley. In the pre-Internet days, that meant road trips. Long, arduous, traffic- and people-filled excursions to big city malls and shopping centers – Atlanta, Jacksonville, Savannah, and all points in between. On Mom’s last shopping day, at the last Toys R’ Us she would visit, she turned down the aisle that featured the Cabbage Patch Kids. There was one green box left on the shelves. Another mother made the same turn at the other end of the aisle. Mom always said she got the jump the other lady by just a few feet. It was all the advantage she needed.

Mom arrived at the lone Cabbage Patch Kid left in Georgia and Florida just ahead of the other lady. Mom immediately saw that the baby in the box wasn’t exactly what Ashley had asked for. But with no other options left, Mom snatched up the box and headed for checkout.

On Christmas morning, Ashley studied her gifts and picked the one that looked most like it held her beloved Cabbage Patch Kid. Mom and Dad watched her intently as she tore into the paper. She had opened the gift with the back of the box facing her. When Ashley saw the familiar Cabbage Patch Kid logo on the box, she ripped the paper away and flipped the box over. Her delight instantly turned into shock. “Oh,” she stated, as a look of total bewilderment transformed her expression.

Mom and Dad howled with laughter. Ashley was expecting a white girl Cabbage Patch Kid. Instead, she got Leroy (his name given to him at his “birth”), a black boy Cabbage Patch Kid. Ashley’s shock didn’t last long and Leroy soon became her most beloved toy. She placed Leroy on her dresser and for the next 15 or so years, Leroy kept a watchful eye on Ashley and her belongings. “I always accepted as my own,” Ashley would comment with a smile on her face many times over the next three decades.

When Mom and Dad moved from the South Gaskin Avenue house to North Gaskin in 1998, Leroy went with them. Mom put Leroy in an old high chair in the spare bedroom upstairs. Seven years later, I was engaged in a conversation with two liberal friends in the newsroom at the old Douglas Daily News. During the conversation, I told a co-workers that I had a black brother. “No you don’t,” he said. “I’ve known you my whole life and you don’t have a black brother.” I told him I did and I’d bring him to the office after lunch for everyone to meet.

I returned a few hours later with Leroy. Like my parents on that Christmas morning, the entire office erupted with laughter. He stayed in my office with me at various locations until 2013. Leroy was incredibly popular at each stop. At the Douglas News, a daughter of one of the inserters would play with Leroy on the weekends. When I came in to work on Monday mornings, Leroy was always somewhere different. The first thing I did each week was find him and put him back on my bookshelf.

At South Georgia State College, people would always ask me about Leroy when they came in my office. As word spread, students would walk into my office with their friends. They’d walk over to Leroy, point to him, and say, “See, I told you.” They often walked out without ever saying a word to me.

When I left the college, I brought Leroy home and placed him on an empty shelf in my living room. There Leroy remained for over two years until Ashley came to my house and took him home with her. I couldn’t say anything to her; Leroy was, after all, her gift. After nearly 20 years, the two were reunited. Today, he holds a place of prominence in her home.

Over the years, we have given and received hundreds, if not thousands, of Christmas presents. Almost all of them have been thrown away, given away, destroyed, or simply lost. All except for Leroy. He’s the only childhood present any of us ever received that we still have.

Is there a point to all of this? Probably not. But it’s a great story, and I think about Leroy, my mom, and my sister every year about this time. The shelf in my living room, the one Leroy used to occupy, remains empty to this day. As I write this, I’m looking up at the shelf and I must confess – I miss Leroy.

Who knew that a baby doll given to my sister over 30 years ago would still be around? None of us would have ever thought so. But then again, Leroy isn’t your average doll.

More in this category: « What is a "red letters" Christian and why I am one Christian allegiance to Trump irrevocably scars the faith »
Login to post comments