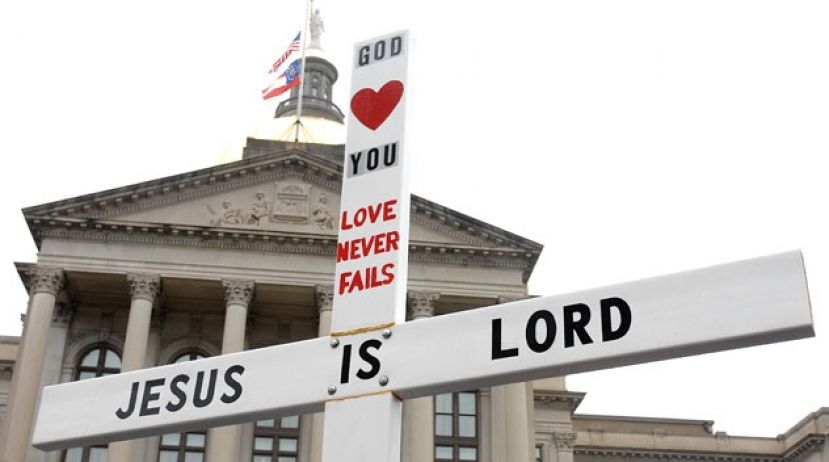 Photo courtesy, clatl.com (Joeff Davis) IN THE NAME OF THE …: The passage of a “religious liberty” bill would do more harm than good for Georgians.

The following article by the editorial board of Creative Loafing (Atlanta) was originally published Jan. 21, 2015 and republished on DouglasNow.com by permission.

Every year, when faced with pressing issues that require action, the General Assembly makes the decision to debate a social issue with little bearing on the problems affecting Georgia residents. In past years it's been abortion or other divisive issues such as guns and immigration. In 2015, Republican state lawmakers are focusing on a "religious liberty" bill for the second consecutive year.

Proponents say such a bill would protect the right to free exercise of religious beliefs. The proposal, which 19 other states have passed in various forms, would supposedly strengthen rights once protected by a federal law, the Religious Freedom Restoration Act, that were undone by a 1997 U.S. Supreme Court ruling. Enter state Sen. Josh McKoon, R-Columbus, and state Rep. Sam Teasley, R-Marietta, who've championed the effort inside the Gold Dome during the legislative session's opening week. Teasley has introduced his proposal, which applies only to the government. McKoon plans to file his legislation soon.

It's odd to see this bill returning in a non-election year, when lawmakers typically cater to the most fervent and foam-mouthed voters. But such legislation is in search of a problem. Why do we need to place safeguards around an already guaranteed constitutional right that isn't actually being threatened? We don't. It's a bill that would hurt Georgians and undermine the state's reputation. And, frankly, it's insulting that lawmakers would take the time to discuss unnecessary legislation over more pressing matters.

More in this category: « Citizens, law enforcement must work together to make our community safer Who am I to refute their judgments? On the question of moral neutrality »
Login to post comments