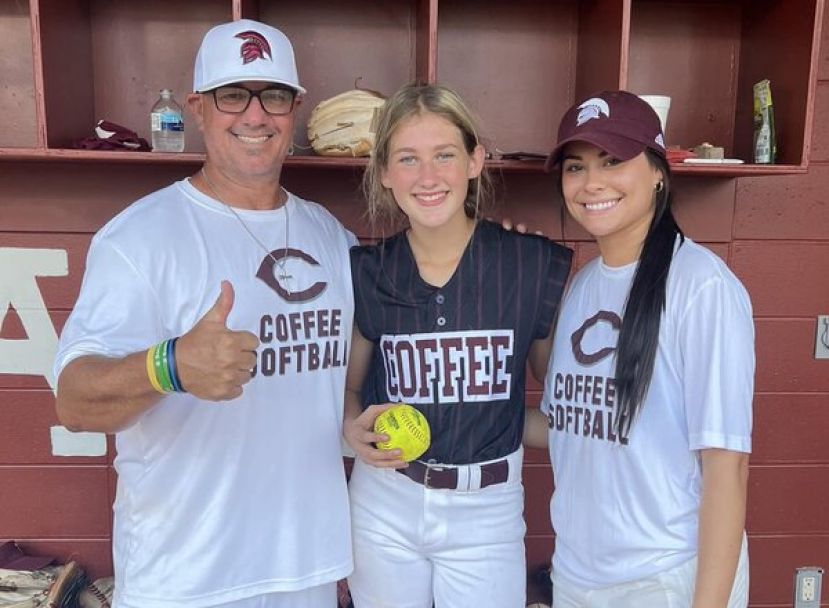 The Coffee football team wasn’t the only set of Trojans to knock off a 7A opponent this week. The Lady Trojans softball team defeated Lee County 8-0 as part of a 2-1 week. which included a win against Bradwell Institute and a loss to Ware County. Both wins were no hitters courtesy of Erin Robinson who also set the single-season strikeout record in the process.

Robinson struck out 13 against Lee. Only one baserunner was able to reach and seniors Imani Paulk and K J Thacker led the way with 2 hits apiece. Hanna Hutchison, Morgan Hodges, Morgan Adams, and Imori Paulk all added a hit in the non-region win against the 7A opponent.

On Tuesday the Lady Trojans fell to region foe Ware County in Waycross 3-1 behind another strong performance by Robinson. "Erin scattered 4 hits along the way but we couldn't get that big hit we needed. We can't waste those good outings from Erin. We have to hit it when we need to,” said head coach Stan Hughes.

Imani Paulk had 2 hits including a double and Hannah Capps, K J Thacker, Erin Robinson, and Ella Winters chipped in a hit each for Coffee.

The Lady Trojans honored five seniors Thursday against another region opponent at Faircloth Field. Bradwell Institute came to town and Robinson threw her second no-hitter of the week with 13 more strikeouts in the 10-0 win. In the process, Robinson set the single-season strikeout record for Coffee with 171.

Imani Paulk continued to stay hot with 2 more hits while everyone in the line-up added 1 hit apiece. Imani Paulk, K J Thacker, Hannah Capps, Morgan Hodges, and Morgan Adams were all honored in front of the home crowd and played well as did the entire Coffee line-up.

"We're playing pretty good softball and looking forward to the region tournament coming up in Statesboro. This team is on a mission and has battled through adversity all year long. They are a strong group of young ladies and have represented Coffee High well,” said Coach Hughes.

The Lady Trojans are now 13-6 and will lock in the 1 or 2 seed in the next week or so. They will also head to Grayson next weekend to square off with the #1 team in 5A Villa Rica and 16-4 Alcovy.