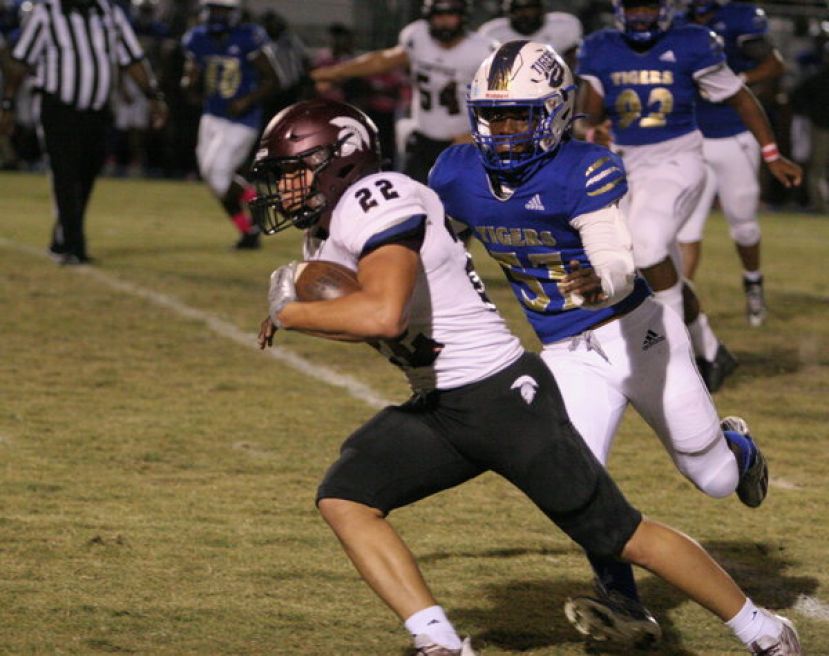 Friday night’s game between the Coffee Trojans and the Bradwell Institute Tigers wasn’t supposed to go this way. Yes, the Trojans notched their first region win of the year, defeating the Tigers 42-13 in a game in which the outcome was never in question.

It just seemed . . . different. Even though the Trojans scored 42 in a region game on the road, Coffee could have put up 60. Two touchdowns were called back on penalties, one of which was a punt return, and Coffee missed another opportunity to get in the end zone late in the game.

Then there was the issue of escalating tensions between the two teams that began early in the game and continued throughout, culminating in an ugly incident during the post-game handshake. Caches quickly restored order and thankfully everyone escaped relatively unscathed.

To some degree, the extracurriculars took away from what happened on the field. Which is a shame because several Trojans had a remarkable night.

The score was tied 7-7 before the Coffee offense ever took the field. The Tigers took the opening kick but couldn’t do anything. They punted and Coffee blocked the punt. Tariq Edwards scooped up the loose ball and ran it in for a touchdown. Jonah Saylor’s kick was good and Coffee led 7-0 early in the first quarter.

The Tigers evened the score when quarterback Christopher Garrett found an open receiver for a touchdown. With 4:42 left in the first, the score was tied at 7.

Coffee scored twice in the second quarter — once on a 24-yard touchdown run by Antwain McDuffie and another on a nine yard pass from quarterback Maurice Hansley to Range Robinson. Saylor suffered an injury in the first quarter, pressing wide receiver James Jarrard into the role of kicker. He made both extra points, as well as the rest that would follow. The Trojans went into halftime with a 21-7 advantage.

The third quarter opened with Fred Brown breaking a 47 yard touchdown run on the second play of the quarter. After the Trojans recovered a Tigers fumble, Brown went to work again, this time steamrolling downfield for a 37 yard score. With 6:24 left in the third quarter, Coffee had a 35-7 lead and looked unstoppable. That feeling continued 85 seconds later when Tyrese Woodgett ran a punt in for a touchdown, giving the Trojans 42-7 lead.

The the penalties and miscues started piling on. Pat McCall returned a punt for a score. The officials called it back. Hansley ran a quarterback keeper in for what would have been another score. The same thing happened — the officials penalized another Trojan. The Coffee missed a chance in the end zone later in the drive. It added a sense of urgency to the game, even though the Trojans were still very much in control. It didn’t help when the Tigers added a second touchdown; Coffee blocked the extra point to keep the score at 42-13.

When time finally expired, the feeling was more of relief than elation. The game was over. Coffee won. And everyone could go home. The win puts the Trojans at 5-1 overall and 1-0 in region play. The Bradwell Institute Tigers remain winless on the season.

Coffee is back in action next week at home against the Statesboro Blue Devils, another region foe. Kickoff is scheduled for 7:30 p.m.