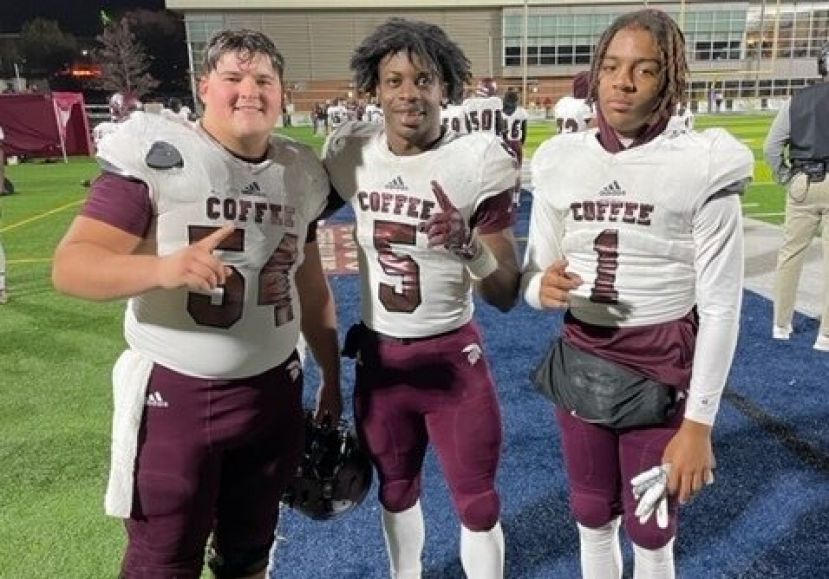 Robert Preston Jr./DouglasNow.com Here are a few Trojans celebrating Coffee's 51-23 win over the Decatur Bulldogs in the second round of the state playoffs. From left: Center Dane Rish, running back Antwain McDuffie, and receiver Pat McCall.

For the Coffee Trojans, their round two playoff matchup against the Decatur Bulldogs was a tale of two halves.

While Coffee led Decatur 14-7 at halftime, it was a tenuous lead at best. Head coach Mike Coe lamented his team’s performance as halftime ended. “We didn’t play very well in the first half. We’re better than they are but we’re not playing like it. If we don’t play better, we’re leaving here with an L tonight,” he said.

The win sets up a rematch of sorts with the Cartersville Hurricanes (11-1). In 2020, Coffee and Cartersville faced off in Cartersville in the semifinals. The Hurricanes won that game 24-17 but ended up losing to Warner Robins 62-28 in the state title game.

The Trojans will once again make the long journey north to Cartersville. The Hurricanes punched their ticket to the third round by defeating the Cambridge Bears 37-14 Friday night.

Things started off well enough for the Trojans. On the second play of the game, junior cornerback Tyriq Edwards picked off a pass from Decatur quarterback Harrison Hannah. Coffee returned the favor a few minutes later by throwing an interception that stopped what was turning into a very promising drive. The Bulldogs marched downfield but the Coffee defense stiffened and shut down the Bulldogs at the five yard line. Decatur opted for a field goal but the Trojans blocked the attempt.

The Coffee offense took over on the 20 and headed downfield The 80-yard drive ended with a three-yard touchdown run by Fred Brown. With only 1:23 left in the first quarter, the Trojans had a 7-0 lead. A little over five minutes later, Brown scored again, this time from 22 yards out to give Coffee a 14-0 lead. The Bulldogs answered with an 18-yard score to narrow the Trojans’ lead to just seven.

Near the end of the half, things got a little weird. With 2:10 left in the half, Decatur ended up with a 4th and 2 on their own 23. Instead of punting, they opted to go for it. The Trojan defense held and Coffee took over on downs with excellent field position. But the Bulldogs showed they could play defense as well. They pushed Coffee backwards and the Trojans wound up with a 4th and 2 of their own. Coffee got the first down but still couldn’t capitalize. With time winding down in the half, the Trojans threw a second interception, this one in the end zone. That gave Decatur one last play with just two seconds left in the second quarter. Hannah and company couldn’t do anything and Coffee headed into the locker room at halftime leading by seven.

But Coach Coe wasn’t happy. “When teams make poor decisions like that 4th and 2 from their own 23, you’ve got to make them pay. We’ve got to do a better job in those situations,” he said.

When the third quarter began, it didn’t take his team long to give him an answer. It took the Trojans less than a minute to score. After a long kick return to open the half, running back Antwain McDuffie scored on a four-yard run. The Trojans forced the Bulldogs to punt and sophomore return man Tyrese Woodgett make them pay. He took the ball to the three before he stepped out of bounds. McDuffie took it from there and scored his second touchdown of the night. Just three minutes into the third quarter, Coffee had extended its lead to 28-7.

And the Trojans weren’t through.

On their ensuing possession, once again, Decatur turned the ball over on downs after going for it on 4th down deep in their own territory. The Coffee offense ran a couple of plays then Woodgett scampered into the end zone from 11 yards out. With 6:07 left in the third quarter, the Trojans were up 35-7

The Coffee defense added a few points when defensive lineman Jackson Banks grabbed Hannah and threw him down in his own end zone for a safety, giving the Trojans a 37-7 lead with 2:50 remaining in the quarter.

Thirty seconds later, McDuffie scored on a  50 yard run. Then with just eight seconds left in the third quarter, Brown barreled through the line and rumbled in for a 46-yard score.

The Bulldogs scored late in the third quarter and a few minutes into the fourth to bring the score to 51-23. The Trojans did not score in the fourth quarter.

The victory gives Coffee a 10-2 record on the season. Kickoff for the Trojans’ quarterfinal contest against the Hurricanes is set for 7:30 p.m. next Friday.

More in this category: « Trojans break the Mustangs 34-6 in first round, head to Decatur next week Hawks earn split at Applebee's Okefenokee College Classic »
Login to post comments