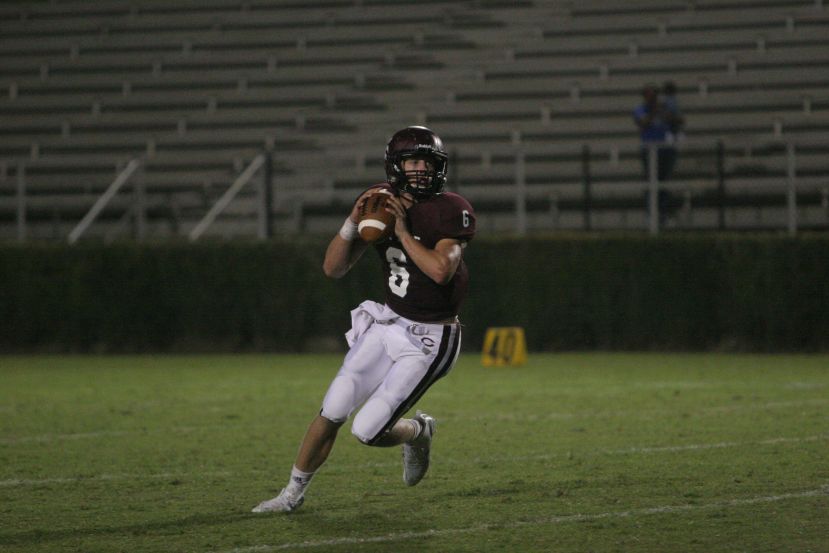 For the first time since 2002, the Coffee Trojans are region champions. All the Trojans had to do in order to secure their first share of the region title in 13 years – and the first championship they have won outright since 1982 – was defeat the embattled Bradwell Institute Tigers Friday night in Hinesville.

Smart money said the Trojans would win the game going away. After all, the Tigers were 0-9 going into the game and hadn’t mustered much offense during the entire season. But this is the kind of game in which a team can easily slip up, particularly if said team starts looking a week ahead to the playoffs.

It’s safe to say that the Trojans were focused on the task at hand Friday night.

Coffee racked up 27 first-half points and added 13 more in the second half to win 40-0 in convincing fashion – the Trojans’ second-most point total of the season. Like has been the case so many times this season, Coffee scored early and often, and had the game in control almost from the opening kick-off.

The Trojans scored their first points midway through the first quarter on a quarterback sneak by Max Hughes to take a 6-0 lead after a missed point-after attempt. About five minutes later, Jeremiah Ashley stepped into the end zone from the one-foot line. Demetrius Davis set up the score with a long run that the Tigers’ defense foiled about 12 inches from the goal line. Sophomore receiver Dalrone Donaldson scored Coffee’s next six points on a touchdown pass from Hughes. With 6:08 left in the first half, Coffee enjoyed a comfortable 20-0 advantage. Jarvis Williams put Coffee ahead 27-0 with two minutes left in the first half when he found paydirt after catching a screen pass from Hughes.

In the second half, the Trojans picked up where they left off, adding another 13 points to leave Hinesville with a 40-0 victory and the region championship. The title is head coach Robby Pruitt’s first at Coffee High and only the fourth region championship in school history.

Coffee won back-to-back region championships in 1981 and 1982. Twenty years later, the Trojans finished the 2002 season in a three-way tie with Lowndes and Valdosta at the top of the region standings. Coffee was credited with the region title after coming out ahead in a tie-breaker and went into the playoffs as a #1 seed. The East Coweta Indians trounced the Trojans a week later at Jardine Stadium 31-9 on a bitterly cold South Georgia Friday night to end Coffee’s season at 7-3-1.

This year, however, Pruitt’s Trojans enter postseason as outright region champions with a 9-1 record (7-1 in region play). Coffee welcomes the Warner Robins Demons to Jardine Stadium next Friday night for the first round of the playoffs. According to the Georgia High School Football Historians Association, the Trojans are 4-3 lifetime against Warner Robins. The two teams last played during the 2009 regular season. The Demons won that contest 35-3 at Jardine Stadium. In another interesting footnote, Coach Pruitt served as Warner Robins’s head football coach for one year back in 2003. He finished the year 6-4 with the Demons. A win against Warner Robins would give Pruitt back-to-back 10-win seasons at Coffee. The Trojans have just four 10-win seasons in school history: 1976, 1981, and 1982 under former head coach Bonwell Royal, and last year under Pruitt.