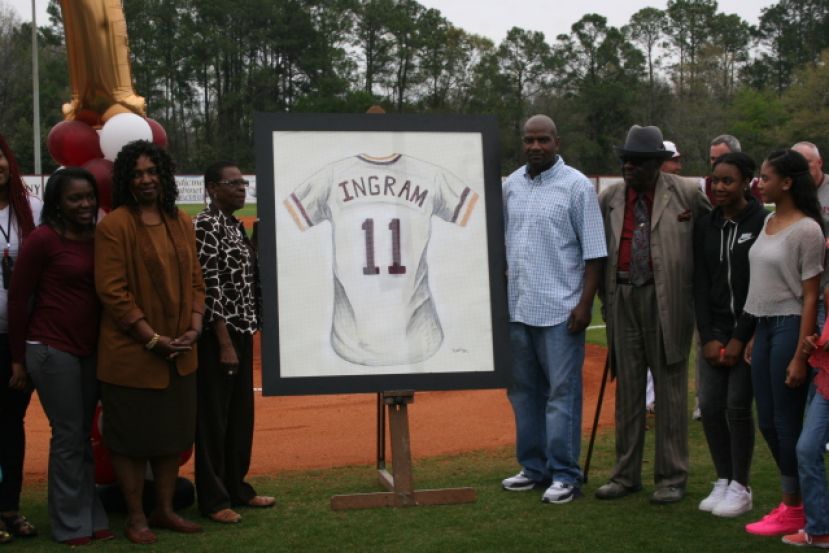 Robert Preston, Jr./DouglasNow.com At tonight's ceremony to remember the late Riccardo Ingram, a former Trojan, two-sport star at Georgia Tech, Major League Baseball player, and respected minor league coach, the Coffee High baseball program presented Ingram's family with two pieces of art drawn by local artist Dylan Ross. The first piece, pictured here, is of his #11 baseball jersey. Pictured to the immediate left of the drawing is Ingram's mother, Robbie. To the right are his brother, Reggie, and his grandfather, city commissioner Johnnie Lee Roper. A number of friends, family, and former teammates were on the field with Ingram's immediate family. Riccardo Ingram passed away after a courageous battle with cancer nearly a year ago.

The greatest Trojan. It’s a debate in which Coffee High sports fan have engaged for decades. It’s a fun, if not altogether fair, discussion to have. Over the years, the Trojans have had their fair share of tremendous athletes. Each team, each season, each year, each decade has had candidates worthy of consideration. Usually, however, the debate always focuses on those football and baseball teams of the early 1980s. Never before in Coffee High history has there been a greater collection of raw talent than what those teams enjoyed. Dozens played in college when a college scholarship was indeed a rarity. Several had professional level talent and, at some point in their post-high school careers, played professionally. And two, Riccardo Ingram and Willis Crockett, played at the highest levels of their respective sports – for Riccardo, Major League Baseball, and for Willis, the National Football League.

Of all the elite-level talent and uncompromising will to win found on those teams, and any team in Coffee history for that matter, one name rises above all others. Riccardo Ingram, All State football and baseball, All ACC in the same two sports at Georgia Tech, only freshman member of the Yellow Jackets’ vaunted Black Watch Defense, ACC Male Athlete of the Year, Playboy All American, Major League outfielder, and respected minor league coach, headlined an athletic program full of headliners.

The awards and accolades, however, only tell part of the story. To really understand Riccardo, you have to look beyond the statistics and the trophies. It’s easy to find those online – his 17 home runs, 99 RBI, and .426 batting average with the Yellow Jackets in 1987. His 28 career home runs at Coffee High, tied with K.G. White for the most ever by a Trojan. His team-leading tackles at Georgia Tech. The All State, All American, and McKelvin Award trophies. The fourth-round pick in the 1987 MLB Draft. A short Major League career; a long and distinguished minor league coaching career.

Yes, those are important. They paint a picture of who Riccardo was. But there’s more. A lot more. To get to know Riccardo, you need to talk to the people who knew him the best, who saw him compete every day, who witnessed him outwork, out-lift, outstudy, and outplay everyone else.

There was the smile. Riccardo wore it everywhere he went. In almost every picture you see, he was smiling. He smiled when his teams won. He smiled when his teams lost. And he smiled right before he delivered those bone-jarring hits that were every orthopedic surgeon’s dreams. The smile and his jovial nature masked what lay beneath – a competitor the likes of which never walked the halls of Coffee High before or since. He didn’t want to just play. He didn’t want to just win. He wanted to dominate. And he wouldn’t let anything stand in his way.

There are a lot of people you could ask about Riccardo’s will to win. Maybe the best might be Bo Jackson. Yes, THAT Bo Jackson. In the 1980s, Georgia Tech and Auburn played each other regularly in football. Before one game in particular, while Bo was shredding opposing defenses, someone asked Riccardo what he planned to do. He said that he intended to knock Bo out of the game. His response drew more than a few laughs. On game day, it didn’t take long before Riccardo had his chance with the country’s best running back. Riccardo leveled Bo, who had to be helped off the field after the hit. “Bo knows a lot of things,” Riccardo used to chuckle, “and one of those things is Riccardo.”

Things clicked for Riccardo in the 10th grade. He realized just how good he was and that he could have a future in sport if he kept working and progressing. That spring, just before a baseball game with Bradwell Institute, head football coach Bonwell Royal insisted that the football players max out in the weight room that afternoon. The guys who played baseball and football weren’t very happy with that. They had a game and they wanted a light workout, not a max effort. That day was the first day that Riccardo benched 300 pounds. At the time, a sophomore benching 300 was fairly rare. To top it off, he went out later that afternoon and belted three home runs against Bradwell. People already knew he was good. That day, he became great.

But the greatest Riccardo Ingram story of all came not in the secondary or at the plate. Instead, it took place on the pitcher’s mound in one of the most insane displays of sheer will to win ever witnessed at Coffee High. Riccardo was a junior and the Trojans were in a three-game series with the Wayne County Yellow Jackets for the region championship. The winner would advance to the state playoffs and likely win a state title. The loser would go home. Wayne County had beaten Coffee during the regular season; as such, the Jackets were the #1 seed. Coffee was #2. Back then, the Trojans played their postseason games at South Georgia College. Wayne County came to Douglas for game one of the series, which they won. Coffee had to travel to Jesup and win two in a row in the Jackets’ backyard to advance.

On the way to Jesup, Andre “Pulpwood” Smith, a senior and future leading rusher for the Georgia Bulldogs, stood up and spoke to the team. Yes, the Trojans had lost, he said. Winning two in a row wasn’t going to be easy, he said. But the fans who were going to be in Jesup that day were true Coffee fans. They believed that the Trojans could win, and the Trojans had to believe they could win as well. It would be tough but not impossible. Pulpwood knew his team could win and he wanted his teammates to believe as well.

Riccardo, who was scheduled to pitch game one of the series, was listening intently. In the first inning of game one, the Yellow Jackets touched Riccardo for six runs. After that, though, he settled down and let his offense do the rest. Coffee won the first game and forced a deciding game three. Between games, someone asked coach Joe Pope who he was going to send to the mound in the final game. Coach Pope was unsure; the Trojans had some good, above average pitchers but nobody who dominated. Coffee was an offensive juggernaut; pitching was the Trojans’ weakness. Riccardo looked down the bench. “Coach, my arm feels fine. I can go back out there,” he said. Everyone looked at Riccardo in amazement. He continued: “I’m in a groove. They can’t hit me. Let me go back out there.” Coach Pope nodded his approval. Riccardo went back out for seven more innings. The Coffee bats woke up and throttled Wayne County behind another complete game win by Riccardo. The Trojans had won the region and went on to win a second-consecutive state championship.

At just under six feet and 205 pounds, Riccardo was never the biggest, fastest, nor strongest on the field. However, he was often the smartest and best prepared. If he had a weakness, it was his speed. His 40-yard dash times were surprisingly pedestrian. However, he made up for his perceived lack of speed by knowing exactly where to be at all times. His field vision and sense of anticipation were unsurpassed. Riccardo made plays with his brain as much as he did with his legs, arms and hands. No, he wasn’t always the most physically gifted player. But he was always the best.

On second thought, maybe that debate about who the greatest Trojan is isn’t so difficult after all.

Riccardo Ingram will forever live in the hearts and memories of Trojan fans everywhere. He is gone but not forgotten, and he left an indelible impression on every person whom he met. He was indeed the greatest Trojan of all.