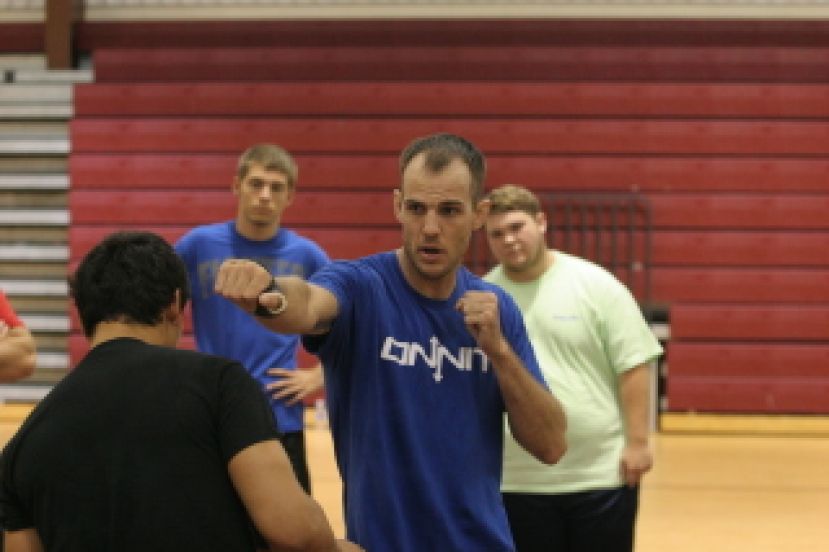 UFC featherweight pro Cole Miller arrived in Douglas late Saturday night for the second leg of his Ride for Alzheimer’s, a charity bike ride event he is doing solo from Macon to Coconut, Fla., to raise money for Alzheimer’s research.

Miller, who holds a 21-8 record, decided to do the bike ride on a whim. He was training for a main event bout against Connor McGregor, which was supposed to take place on July 19 in Dublin, Ireland, when he injured ligaments in his thumb. Unable to make a fist or grab, he had to cancel the fight. “I wouldn’t have cancelled it if it wasn’t absolutely necessary. If you can’t make a fist or grab, you can’t fight. It was going to be a career-defining fight for me but what can you do?” said Miller in Douglas Sunday at the George Washington Carver Ninth Grade Academy gymnasium, wearing a half-cast on his injured hand.

Since he couldn’t do much training, he decided to ride his bike from Macon to Coconut, Fla., stopping every 60-100 miles to conduct MMA seminars along the way. The money he raises for the seminar will be donated to the Alzheimer’s Association. Miller recently lost his grandfather to Alzheimer’s. The 670-mile journey will take him nine days to complete.

During the seminar in Douglas, Miller instructed participants both striking and the ground game in an MMA environment. “A lot of fighters are good strikers but don’t have the confidence to use their skills in MMA. We’re going to spend about half the seminar covering striking then we’ll spend the second half covering ground skills,” he said. “I hope everyone can take one thing away from the seminar that they can apply to their MMA game. I want them to become better fighters as a result of what we cover today.”

Miller had two seminars planned for Monday – a late-morning session in Kinglsand and an afternoon session in Neptune Beach, Fla. Once he finishes with the Alzheimer’s ride and recovers from his injury, he will return to fighting in the UFC. He plans to fight again around October. Sunday’s seminar in Douglas raised over $1,000 for Alzheimer’s research.