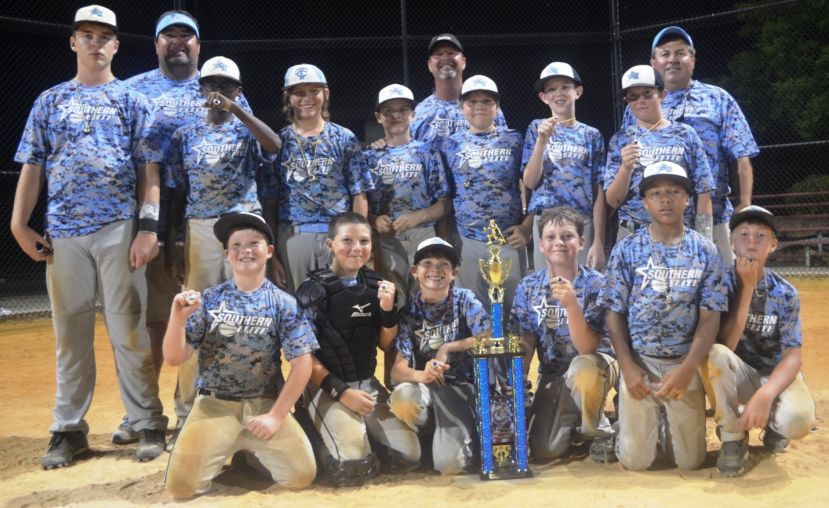 On June 14 and 15, the Southern Elite 11U baseball team won the 2014 USSSA South State Tournament after rallying from three losses on Saturday to run the table on Sunday for the win.  “We didn’t play well our first two games on Saturday.  We had a tournament the previous week get cancelled due to rain and it had been nearly three weeks since we last played in games.  So we were rusty and it showed.  We finally got on track in the third game, but gave it away in the last inning with some errors and key mental mistakes. That was a heartbreaking loss,” said head coach Jeff Weems.

However, on Sunday, the young men of Southern Elite came out with a renewed focus and determination.  “We talked to the guys before the day got started on Sunday and let them know that this was a new day, that we believed in them and that they had to start believing in themselves.  I don’t know how much of a factor that talk played into it, but they became the team that I knew we had and played lights out all day.  I couldn’t be more proud of these young men,” said Weems.  Faced with the monumental task of winning four consecutive games with little to no rest between games, Southern Elite marched their way through the loser’s bracket and beat the #1 team twice to claim the title.

In the first game on Sunday, SE won 3-2 with a walk off double by Jarrett Dopson while Ty Taylor and Trey Wright turned in tremendous performances on the mound.  Their opponent in that game had been averaging 10 runs a game in the tournament.  In the second game, the SE bats would come alive as they won 15-7.  Logan Miller was the star of the game at the plate going 2-2 with a three-run, inside-the-park home run.  On the mound, Tra’Vonte Williams went three strong innings and Jarrett Dopson slammed the door in the final inning.  The third game of the day saw SE beat the #1 team 24-12.  Every batter in the lineup would score in the game with Will Berryhill, Ty Taylor, Tra’Vonte Williams, and Jarrett Dopson all collecting three hits each.  Having won game three, SE forced the “if” game in a winner take all, one game shoot out.

Behind the strong pitching of Jarrett Dopson, SE took a 7-2 lead into the bottom of the fourth inning.  Having changed pitchers though, SE quickly found themselves with the bases loaded and no outs.  Another pitching change and couple of costly errors led to Southern Elite giving up six runs before getting out of the inning trailing 8-7.  SE stormed right back and answered the call by scoring a pair of runs to retake the lead 9-8.  Southern Elite was then just three outs away from winning the state tournament.

Having gotten SE out of the bases loaded jam the previous inning, Trey Wright went back out for the final inning.  He was pitching well and had two outs with runners on first and third when an errant pickoff attempt allowed the tying run to cross the plate.  “That one was on me.  I called the pickoff because the guy was taking a big lead and didn’t look like he was paying attention.  We didn’t execute and it cost us not only the tying run but the momentum too.  Terrible mistake on my part,” said Coach Weems.  Wright would walk the next batter and Weems had the following batter intentionally walked to load the bases with two outs. With the game on the line, the next batter ran the count to 3-2, but Wright would exit the game with shoulder pain.  So with the bases loaded, the winning run on third, two outs and a 3-2 count on the batter, Ty Taylor came to the mound.

Taylor got a foul ball on the first pitch and a weak pop-up to the shortstop on the second one.  That ended the threat and the inning.  “In my 43 years, I’ve seen a lot of baseball.  What Ty did right there is one of the greatest sporting achievements I’ve ever witnessed.  That was just incredible,” said Weems.  Now headed to extra innings, SE would plate six runs with the biggest blow coming from Will Berryhill, who hit a bases-loaded double down the right field line.  Taylor would go back out for the bottom of the sixth and completed the inning only giving up one run.  That sealed the victory with Southern Elite winning the championship 15-10.

For the tournament, Southern Elite hit .412, with 75 runs, 15 doubles, two home runs, and 55 stolen bases.  Jarrett Dopson, Ty Taylor, and Trey Wright all turned in MVP worthy performances.  Dopson hit .611 with four doubles, eight RBI, six runs, and a 1.452 OPS while also throwing 6 and 1/3 innings with eight strikeouts.  Taylor hit .550 with two doubles, eight RBI, eight runs, and a 1.241 OPS while also throwing 7 and 1/3 innings giving up only three runs on five hits with a 2.45 ERA and a .185 batting average against.  Wright hit .421 with thre doubles, nine RBI, seven runs, and a 1.101 OPS while throwing 3 and 2/3 innings with four strikeouts.  Will Berryhill was the team’s Silver Slugger, hitting .632 with five doubles, nine RBI, 11 runs, and a 1.561 OPS.  Logan Miller and Tra’Vonte Williams would both hit inside-the-park home runs while Hayden Weems hit .417 and Slade White hit .308.  In all, eight different pitchers took the mound for Southern Elite during the tournament, including Drew Johnson, Logan Miller, Nathan Vining, and Hayden Weems.

With the win, Southern Elite 11U earned and accepted an invitation to play in Atlanta on June 28-29 in the Georgia USSSA Final Four Tournament.

Southern Elite is based out of Douglas and are on the Web at www.gasouthernelite.com.