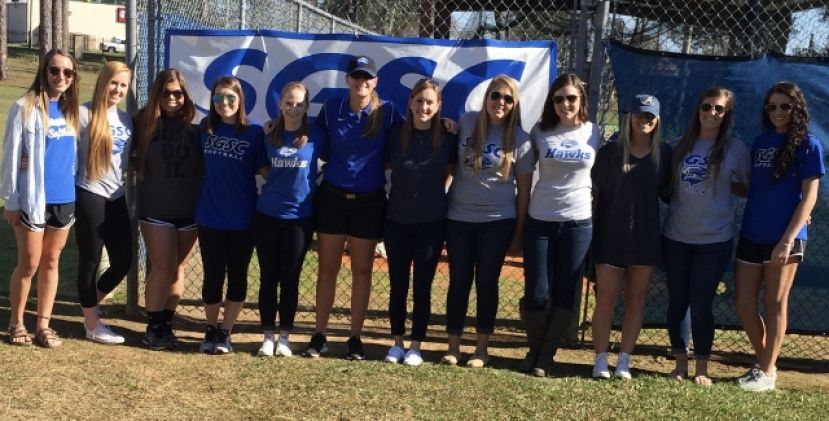 South Georgia State College held a host of activities this past weekend for Homecoming 2017. Among those were athletic events featuring swimming, softball, and baseball. The teams welcomed alumni and honored nurses and law enforcement at the games.

SGSC’s swim team started the weekend activities by hosting their last meet of the season in the South Georgia Small College Championships against visiting Thomas University. The women took first place honors over Thomas while the men finished second.

Leading the women was Jacksonville’s Kiana Ocasio-Molina. Molina won three of her four events and took the High Point top swimmer award for the women. She was first in the 200 IM, 100 and 200 backstroke events. Also winning events for SGSC were Warner Robins sophomore Nikki Daley in the 100 and 200 freestyle, Jessica Dunton in the 400 IM and 200 butterfly and Brittany Herndon in the 100 IM, both Carrolton Blue Fin swimmers.

The team will now focus on preparations for the NJCAA national meet in Buffalo, NY. The national meet will be held March 2nd - 5th at Erie Community College.

SGSC’s Lady Hawks softball team had a successful day and honored their alumni and area nurses with a special recognition. The first pitch was thrown out by former player and BSN nursing student Kathryn Dunn. The Lady Hawks came away with two victories on the day over USC-Salkehatchie from South Carolina.

In game one, SGSC grabbed an early lead on its way to a 7-3 win. The Lady Hawks scored on a single by Loren Mertz, a stolen base by Halie Pearce, a single by Chelsea Lyons, and a stolen base by Megan Farmer in the second inning. Sarah Smith earned the win for the Lady Hawks pitching seven innings, giving up three runs, four hits, and striking out three. SGSC had ten hits in the game. Pearce and Lyons each collected three hits to lead the Lady Hawks. SGSC tore up the base paths, as three players stole at least two bases. Lyons led the way with five stolen bases.

In the second game of the double-header, the Lady Hawks defeated USC-Salkehatchie 2 – 1 thanks to a walk-off single by Abbie Lewis after the score remained tied in the eighth inning. The Lady Hawks had tied the game up in the bottom of the sixth with an RBI by Michaelin Thomas. Overall, SGSC collected eight hits. The final hit by Lewis brought in the winning run. Lewis had a good day on the mound by earning the win. She pitched eight innings, allowing one run, six hits, striking out one, and walking one.

The Hawks baseball team added two wins to the day and honored law enforcement during their games. Officer Larry Carter of the Douglas Police Department threw out the first pitch. In the opening game of a double-header against USC-Salkehatchie, the Hawks garnered a win with a score of 7 – 6. The opposing team was ahead by six runs until the Hawks took the bottom of the third to score five runs of their own. In the bottom of the seventh, SGSC tied the score. Salkehatchie could not muster up a run in the top of the eighth, but Zack Williams stepped up to the plate in the bottom of the inning and singled, driving in the winning run.

The momentum stayed with the Hawks in game two. The teams traded a back-and-forth lead, but eventually the Hawks prevailed 13 – 3. SGSC and USC each scored two runs in the second and one run in the fourth. The fifth inning gave the Hawks the lead and the security for a victory thanks to eight runs by SGSC with an addition of two more runs in the sixth. The Hawks collected 17 hits in the game.  Chandler Rogers led with three hits. Lincoln Hewett, Chase Hinson, Jacob Schmidt, and Steve Wells all contributed two hits. Zack Williams, Cameron Coffey, Jake Kennedy, Kaleb Hill, Randy Heller, and Spencer Speer added one to the hits count.