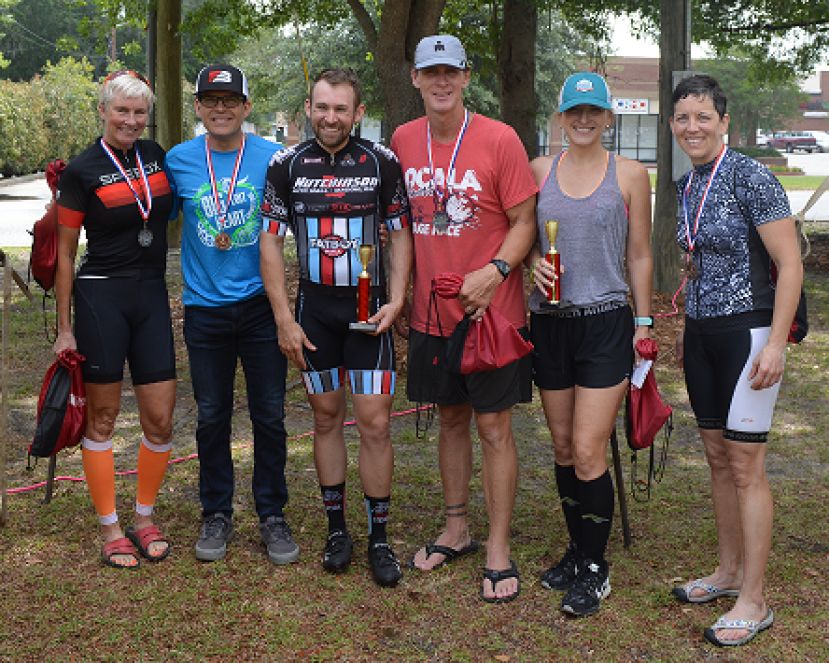 Trey Griffin of Poulan and Heather Hall of Waycross won the 40-mile bike race at the 13th Annual Big Heart Charity Bike Ride, held on May 13, 2017 at Coffee Regional Medical Center. Forty-five cyclists took part in the event between the race and the various non-competitive ride options. The cyclists participated in one of the traditional 20, 40, 60, or 100 mile rides or the newest addition, the 40-mile race.

At 8 am the racers led the event out of Douglas to Ambrose, Broxton and back to Douglas with the help of the Douglas Police Department and the Coffee County Sheriff’s Department. While the riders enjoyed the southern country side of Coffee County, the racers blazed down the highways reaching speeds of over 30 mph.  The top three male and female finishers received awards in the race.  First place male was Trey Griffin from Poulan with a time of 1:44:38, winning a $200 VISA gift card, second place male was Jamie Bowen from Blackshear (1:44: 39:18) and third place male was Rob Reynolds from Hahira (1:45:33). First place female was Heather Hall from Waycross with a time of 1:54:39 winning a $200 VISA gift card, second place female was Tammy Hassenpflug from Hoboken (1:57:10), and third place female was Claire Moon from Tifton (1:58:27).  Upon completion, cyclists enjoyed a shrimp and grits plate prepared by the CRMC cafeteria team leader Danny Sermons.

All proceeds from the event will benefit Cardiac Rehab Scholarship Program.  Danny McCarty, CRMC Wellness Center Director would like to thank Rodney Ragsdale, the Coffee High Technology Student Association leader and his student volunteers from CHS TSA for hosting each rest stop for the cyclists.  Organizers also want to thank the Ambrose Fire Department and Broxton Fire Department for allowing them to use their facilities as rest stops.  A special thanks to Doyle Wooten, Eugene Paulk, and the Sherriff’s Department for an outstanding job leading the race, blocking intersections, and constant support throughout the entire ride. Another special thanks to the City of Douglas Police Department for helping with all traffic areas, blocking traffic, and ensuring the safety of our riders.  Cyclists were amazed at the support from local law enforcement.

Event sponsors included CRMC Wellness Center, Dr Bill Davis -Douglas Vascular Center, Burger King, Wal-Mart Transportation and Logistics, L&M Bag and Supply Company, Coley Electric, Fletcher Oil Company, and Optima Chemical Group, LLC.   Danny McCarty would like to give a special thanks to Bob Decamp and Bo Bannister for preparing all the routes for the event, Ron Morris for setting up the Children’s Bicycle Safety Rodeo and planning the 40 mile race, and Wellness Center staff and volunteers who helped get all the technical stuff complete.