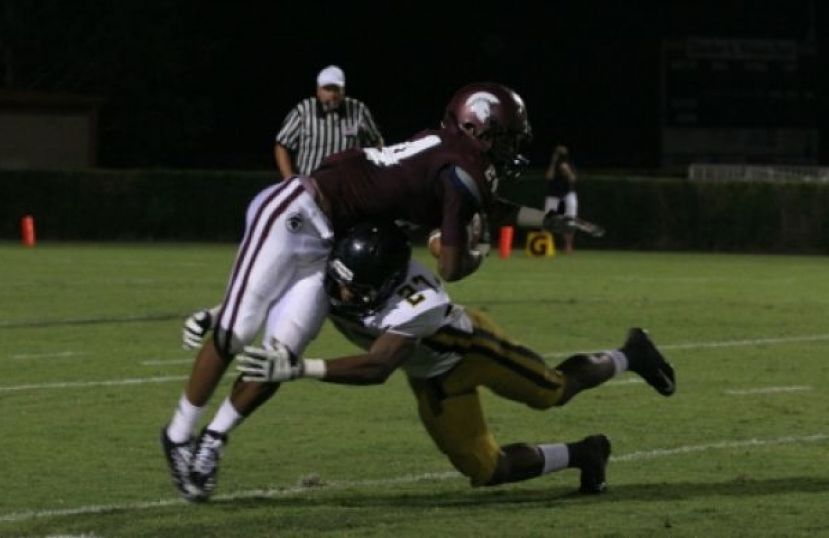 The Coffee Trojans managed just one score – and it came on special teams at that – against the Colquitt County Packers Thursday night in a pre-season scrimmage in Douglas. The Packers, who are one of the favorites to contend for a 6A state championship this year, outlasted the Trojans 24-7 on a humid, muggy South Georgia night between the hedges at Jardine Stadium.

Colquitt took the opening kick-off and drove 71 yards before stalling just shy of the end zone. Sophomore kicker Baudilio Martinez converted a short field goal to give the Pack a 3-0 lead. On Coffee’s ensuing possession, Colquitt intercepted a Tyree Paulk pass and ran it into the end zone for the game’s first touchdown. Martinez made the point after to increase Colquitt’s advantage to 10-0. The Trojans answered when Anthony Fussell returned Martinez’s kick-off 88 yards for a score. It would be the only points Coffee would score all night. The Packers added two more first-half touchdowns on 13-yard run by running back Ty Lee and a 30-yard reception by Johnnari Greene.

In the second half, the varsity squads for both teams played just the third quarter, with neither team scoring. The junior varsity teams took over and played the fourth quarter.

Both teams begin the regular season next week. The Packers face Mill Creek at McEachern while the Trojans will play North Oconee at Georgia Southern in Statesboro.