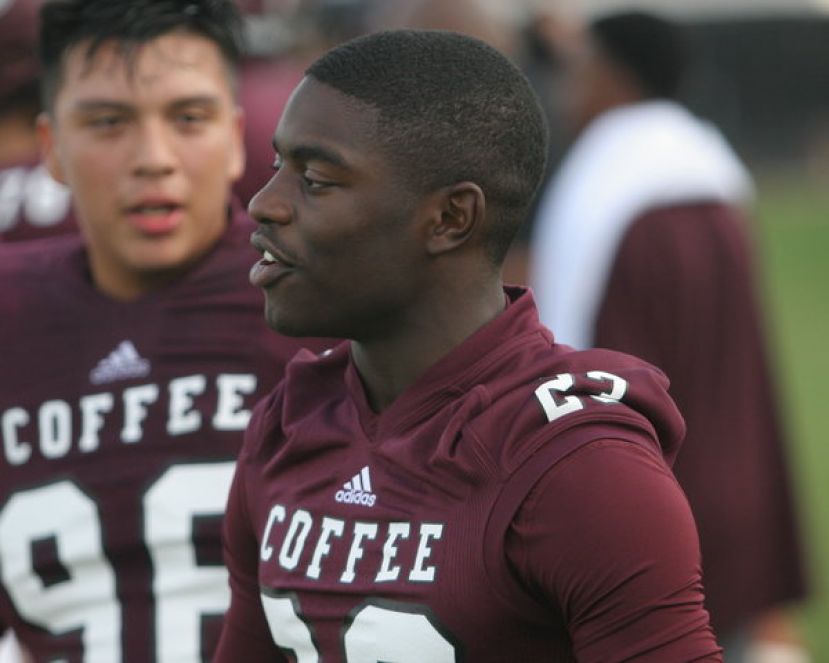 Robert Preston Jr./DouglasNow.com Coffee's Jarquavious Jefferson, seen here on the sidelines earlier this year when he was recovering from an injury, intercepted a Tucker pass late in the semifinal game on Friday, Dec. 1, 2017, that effectively sealed a 14-3 win for the Coffee Trojans. Coffee will play in its first state football title game on Dec. 8, 2017, at 8 p.m. at Mercedes Benz Stadium in Atlanta.

The Coffee Trojans are headed to Mercedes Benz Stadium to play in the state championship game for the first time in school history. The Trojans earned a berth in the title game by upsetting the formidable Tucker Tigers 14-3 at Adams Stadium in Atlanta Friday night. The win sets up a re-match with region foe Lee County, which defeated Coffee 23-7 in Leesburg on Nov. 3.

The Trojans were limited Friday night – running back/linebacker Jameon Gaskin played but wasn’t himself after suffering an injury last week against Alpharetta. Marquavious Jefferson was limited to just his defensive duties because of a similar injury. That left the diminutive sophomore Antonio Dawson – who stands 5’2” and weighs all of 128 pounds -- to handle much of the running back duties against a big, physical Tucker defense. He played a solid game and scored the second of Coffee’s two touchdowns on the night.

Tucker came into the game as the favorite. The Trojans were on the road to the metro Atlanta area for the third straight week. Tucker was also the third consecutive #1 seed Coffee had faced during this post-season. The Trojans looked confident and unfazed by the magnitude of the moment.

Coffee struck first, capitalizing on a big miscue by the Tigers’ special teams unit. Tucker received the opening kick and mishandled the ball. The Trojans recovered deep in Tiger territory and made the most of the gift. They ran a couple of plays before quarterback Wade Sumner danced into the end zone from five yards out for a quick score. After a successful point-after, Coffee had a 7-0 lead just 1:15 into the game.

The two teams traded possessions until the very end of the second quarter. With just five seconds left in the first half, the Tigers capped 98-yard drive with a 26-yard field goal. The first half ended with Coffee leading 7-3.

The Trojans took the opening kick of the third quarter and wanted to put some more points on the board early on. That didn’t happen. The stingy Tiger defense forced a Coffee punt. Tucker took over on their own 29 yard line and began marching downfield. The drive stalled at the 17 yard line and the Tigers decided to try a field goal late in the third quarter. Coffee got a break when the kick missed the uprights. The Trojans took advantage of the opportunity and launched a methodical drive of their own. A big reception by Milton Jackson ate up a big chunk of real estate and put Coffee just outside of the red zone. Then Sumner found Dawson for a 26-yard touchdown pass with 9:43 left in the game. Another good extra point gave the Trojans a 14-3 lead.

The Tigers and the Trojans each punted on their next possessions. With a chance for a comeback slipping through their proverbial fingers, the Tigers had to score quickly on their third possession of the half. They started their drive at their own 17 and moved downfield. Then they went for a deep pass, one that looked as though it was going to be on target and give Tucker a new lease on its football life. Coffee’s Jarquavious  Jefferson, however, had other plans. He intercepted the pass, likely saving the game in the process. The Trojans took over on their own nine yard line with just over four minutes remaining. From there it was keep the ball on the ground, get a few first downs, and run out the clock.

That’s exactly what Sumner and company did. The Trojans made it out of Atlanta with a 14-3 win and a chance to win a state championship. “That was awesome. It was a total team effort. Our defense was stellar tonight. And how about [Antonio Dawson]? These kids deserve it. They worked their butts off. They’ve been through so much adversity over the last few years. They’ve lost teammates, coaches. If I don’t win another state championship, the Good Lord has given me my share. I want it for these kids. They deserve it. The community deserves it. They’ve invested a lot in these kids,” said head coach Robby Pruitt after the game.

The 6A state title game will be played Friday, Dec. 8, at 8 p.m. at Mercedes Benz Stadium in Atlanta. DouglasNow.com will publish ticket information as soon as it’s available. There’s no word on what the school system has planned for next Friday; however, this writer has a sneaking suspicion there will be no school on game day. That information will also be published as soon as it’s released.